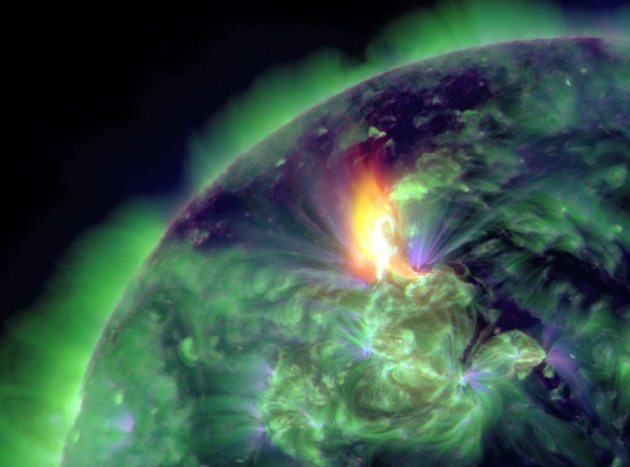 A space weather service in the UK hopes to provide early warning of powerful solar storms.

Christmas dinner by candlelight might seem quaint and appealing, but the possibility of days without satellite communications and power — let alone the television and the means to reheat the leftovers — are more alarming. The UK government has announced plans to fund a new space-weather forecasting service in an effort to lessen the effects of such disaster scenarios.

Run by the Met Office, the service would provide an early warning for businesses and services that are likely to be affected by severe space weather — changes in environmental conditions that result when magnetic storms in the Sun's atmosphere release streams of energetic particles into space. Such effects can damage satellites, create havoc with Earth's magnetic field and, in severe cases, cause radio blackouts and knock out the Global Positioning System and power services.

Mark Gibbs, the Met Office's space-weather business manager, says that the centre would provide a back-up for the US Space Weather Prediction Center (SWPC), which is run by the National Oceanic and Atmospheric Administration's National Weather Service, and based in Boulder, Colorado. The Met Office already holds daily forecasting briefings with the SWPC, which initially approached it with a request that the two agencies work together to provide better global resilience to space weather in 2011.

Backed by £4.6 million ($7.5 million) of UK government funding over three years, the service will run 24 hours a day, every day, from April 2014. Although it will alert the providers of critical services such as the National Grid, the service will not provide a space-weather-alert subscription service for businesses — unlike the SWPC. The number of worldwide subscribers to the SWPC’s space-weather alerts had risen from about 5,000 in 2007 to more than 37,000 in 2013.

The UK service will use the same basic data as its US counterpart, gathered from European Space Agency and NASA space observatories. But it will use slightly different models and ground-based data, including measurements by the British Geological Survey of the size of the magnetic storms in Earth’s atmosphere. None of the new funding will go into research, although a portion will fund a small team tasked with meeting scientists with the aim of enabling the scientists' models to become part of the Met Office's space-weather effort, says Gibbs.

According to the UK science minister David Willetts, who announced the new service, the increasing use of technology that can be affected by space weather, as well as an approaching peak in the Sun's 11-year cycle of activity, means that Earth is especially vulnerable. "Now is the right time to invest in space-weather forecasting capability," he says.

Speaking at a meeting of the American Geophysical Union in San Francisco, California, earlier this month, space physicist Daniel Baker of the University of Colorado in Boulder used data from a massive 2012 solar storm, which was captured by NASA’s space observatory STEREO-A, to warn policy-makers of the dangers of severe space weather.

During the 2012 storm, the massive ejection of material sent billions of tonnes of solar particles into space, initially at speeds of more than 11 million kilometres per hour. In this case, the ejection occurred on the far side of the Sun. If the same event had occurred just a week later, the Sun's rotation would have meant that Earth would have been affected.

Gibbs says that the ferocity of the event was comparable to that of the famous Carrington storm of 1859, during which night skies became so bright that newspapers could be read as easily as in daylight and telegraph systems caught fire. There is a 12% chance of that kind of event occurring in the next decade, he adds.