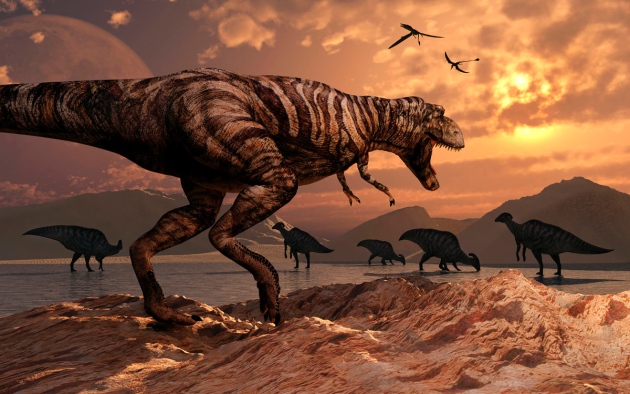 Some scientists have suggested that Tyrannosaurus rex was mainly a scavenger, but a tooth found lodged in another dinosaur's tail shows that it did attack prey.

Audiences the world over gripped their seats as the Tyrannosaurus rex in Jurassic Park sank its teeth into velociraptors and chewed up avaricious lawyers. In spite of this portrayal, there was no hard evidence at the time that the dinosaur actually bit into anything living, and some palaeontologists have proposed that it scavenged for its meals. But now, a team has found definitive evidence that the T. rex did hunt for live prey.

The researchers found a T. rex tooth stuck between vertebrae in the tail of a herbivorous duck-billed hadrosaur. The specimen was excavated from the Hell Creek Formation, a famous fossil locality in South Dakota.

Scrapes, bites and even dislodged T. rex teeth stuck in the bones of other dinosaur species are common, but there has previously been no way to know whether these bites were made while the prey was being actively attacked by a T. rex, or whether the animal had died in some other way and then been scavenged on by the toothy dinosaur.

The latest find is different because the T. rex tooth is surrounded by bone that clearly grew after the tooth became lodged there. The only way that such a situation could arise is if a T. rex had bitten the hadrosaur, lost its tooth in the hadrosaur’s tail and then also lost its prey. In the weeks that followed the predation, the tail of the lucky hadrosaur healed up and bone regenerated around the predator’s lodged tooth, the authors report in Proceedings of the National Academy of Sciences1. 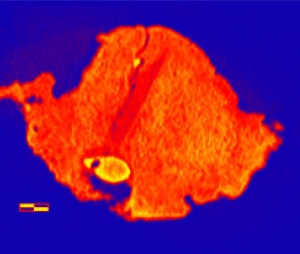 This CT scan of a duck-billed hadrosaur's vertebra shows an embedded T. rex tooth crown with bone tissue that regrew around it — implying that the hadrosaur survived the attack.

The team argues that because the tooth is embedded in the tail bones (see picture), the wound was likely made while T. rex was chasing after its prey. “It’s a smoking gun. We finally have Tyrannosaurus rex caught in the act,” says Bruce Rothschild, a palaeopathologist at the University of Kansas in Lawrence and a co-author of the paper.

“We’ve seen plenty of re-healed bite marks attributed to Tyrannosaurus rex, but it’s hard to confirm identity with those,” says Thomas Holtz, a vertebrate palaeontologist from the University of Maryland in College Park. “Actually having the broken tooth makes it easy to determine who was doing the hunting here,”

As intriguing as the fossil is, some think that it does not change much. “I’ve long argued that Tyrannosaurus rex was an opportunist like a hyena, sometimes hunting and sometimes scavenging. This provides no evidence to the contrary,” says Jack Horner, a palaeontologist at the Museum of the Rockies in Bozeman, Montana, who served as scientific adviser on the Jurassic Park films.

In fact, many palaeontologists are getting fed up with what they consider to be a phony debate over predation and scavenging. “Great galloping lizards!” exclaims John Hutchinson, an evolutionary physiologist at the Royal Veterinary College in London. “It is so frustrating to see provocative half-baked ideas about celebrity species like Tyrannosaurus rex drawing the public’s attention when there is so much more interesting palaeontology to be talking about.”