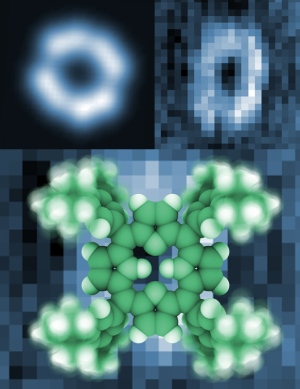 Prepare to take flight across the surface of a molecule. An unprecedented window on the nanoscale world lets you feel the heft of the atoms beneath and test the strength of the chemical bonds that hold them together.

This vision is now a reality, thanks to a system reported in this week's Nature1 that combines the best features of two imaging techniques: Raman spectroscopy and the scanning tunnelling microscope (STM). “It enables you to look at the guts of a molecule,” says Joanna Atkin, a spectroscopist at the University of Colorado Boulder, who co-wrote a News and Views commentary to accompany the work2.

Raman spectroscopy uses laser light to make sample molecules vibrate in various ways: atoms wag or twist, for example, and chemical bonds stretch back and forth. The photons that make the molecule dance lose a certain amount of energy depending on the movement, and have a lower frequency when they scatter away. Different groups of atoms vibrate in unique ways, so the changes in the scattered light constitute a characteristic fingerprint that can identify a molecule.

But the technique is no good for studying very small samples. “Only one in a million photons drives one of these vibrational modes and gets shifted,” explains Atkin. The conventional Raman signal from a single molecule would be much too weak to discern.

In recent years, however, researchers have found ways to use Raman spectroscopy on ever-smaller targets, with the help of the incredibly sharp metal tip of an STM. When the tip hovers less than one nanometre above a surface, electrons can quantum-tunnel across the gap; the intensity of the resulting electric current depends on the position and character of the atoms beneath the tip, enabling atomic-scale mapping. But the tip can also confine and enhance the electric field of a Raman laser, enabling it to probe areas as small as 3 nanometres wide.

Now researchers report1 that they have enhanced the sensitivity of this system even further, providing Raman spectra for regions as small as 0.2 nanometres wide — enough to study parts of a single molecule. The technique offers a lot more chemical information about the sample than an STM alone, and much better resolution than previous forms of Raman spectroscopy.

The trick is to use the incoming laser light to set up oscillations in the electric field across the STM tip. When the frequency of these oscillations, known as plasmons, matches the absorption and emission of Raman photons, the signal gets a huge boost.

The team used the technique to study a single ring-shaped porphyrin molecule, stuck to a silver surface at low temperature and high vacuum. Scanning different regions of the molecule showed their particular Raman responses, and built up a molecular map that highlights the characteristic four-lobed pattern of the porphyrin structure (see image).

Visually, the resulting images don't look as detailed as those produced by methods such as atomic force microscopy, but the Raman probing can extract information that mere imaging does not provide — such as the strength of the molecular bonds.

“What’s astonishing is this very high resolution,” says Bruno Pettinger, a physical chemist at the Max Planck Society's Fritz Haber Institute in Berlin, who has also been developing single-molecule Raman spectroscopy. He points out that porphyrins have a particularly strong Raman signal, however, so other molecules may not yield such spectacular results.

“I believe this will have a big impact on bioimaging,” says Zhenchao Dong, a physical chemist at the University of Science and Technology of China in Hefei and a member of the team that developed the technique. Dong notes that the spatial resolution of the team's Raman probe is roughly the same as the distance between base pairs along the backbone of DNA, for example; he predicts that with further refinements, the system could be used to discern their sequence.