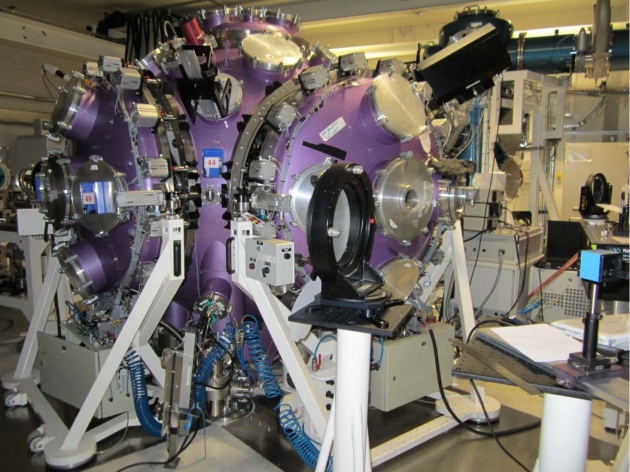 Protons and boron nuclei have been fused in the lab to create energy without producing neutron radiation.

Scientists have been working for decades to harness the power source of the stars — the fusion of lighter nuclei to build heavier ones under enormous temperatures and pressures. Fusion unleashes vast amounts of energy that might one day be used to power giant electrical grids. But the laboratory systems that seem most promising produce radiation in the form of fast-moving neutrons, and these present a health hazard that requires heavy shielding and even degrades the walls of the fusion reactor.

Physicists have now produced fusion at an accelerated rate in the laboratory without generating harmful neutrons.  A team led by Christine Labaune, research director of the CNRS Laboratory for the Use of Intense Lasers at the Ecole Polytechnique in Palaiseau, France, used a two-laser system to fuse protons and boron-11 nuclei. One laser created a short-lived plasma, or highly ionized gas of boron nuclei, by heating boron atoms; the other laser generated a beam of protons that smashed into the boron nuclei, releasing slow-moving helium particles but no neutrons. The researchers describe their work in Nature Communications today1.

Previous laser experiments that generated boron fusion aimed the laser at a boron target to initiate the reaction, Labaune notes. In her team’s experiment, the laser-generated proton beam produces a tenfold increase of boron fusion because protons and boron nuclei are instead collided together directly, she says.

Lasers have previously been used to crush a tiny pellet of two hydrogen isotopes —  deuterium and tritium, containing two and three neutrons, respectively — to the point of initiating fusion. But in addition to producing neutron radiation, crushing the pellet evenly for the reaction requires a large array of lasers — there are nearly 200 at the world's largest laser, the National Ignition Facility (NIF) at the Lawrence Livermore National Laboratory in California. If the boron-fusion method were succesfully scaled up, “we expect that it will reduce significantly the total laser energy" needed compared with that used at NIF, says Labaune.

Timing was crucial for the success of the experiment, says study co-author Johann Rafelski, a theoretical physicist at the University of Arizona in Tucson. The boron plasma generated by the laser lasts only about one-billionth of a second, and so the pulse of protons, which lasts one-trillionth of a second, must be precisely synchronized to slam into the boron target. The proton beam is preceded by a beam of electrons, generated by the same laser, that pushes away electrons in the boron plasma, allowing the protons more of a chance to collide with the boron nuclei and initiate fusion.

The lasers that Labaune’s teams used to generate fusion do so in brief spurts separated by up to 90 minutes. But the same experiment could be repeated with faster lasers that would generate fusion reactions continuously, says laser physicist Gérard Mourou at the Ecole Polytechnique, who was not involved in the research.

The study was not designed to attain fusion’s holy grail — ignition, the break-even point at which the energy generated by the fusion process equals that of the input energy required to power the lasers. But leaps in the power and miniaturization of lasers and the simplicity of the two-laser system “makes this scheme practical” as a future power source, says Mourou.