The informal information source, Twitter, was yielding data that would have been a quicker way of detecting and tracking the deadly cholera outbreak in Haiti than traditional methods, according to a study.

The study found that online social media and news feeds were faster than, and broadly as accurate as, the official records at detecting the start and early progress of the epidemic, which hit Haiti after the earthquake in January 2010 and has killed more than 6,500 people. 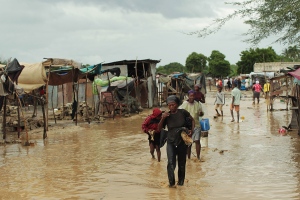 The results appear today in a special section of The American Journal of Tropical Medicine and Hygiene, published on the second anniversary of the earthquake1.

The authors used HealthMap, an automated surveillance platform, to measure the volume of news media generated during the first 100 days of the outbreak, and they also looked at the number of 'cholera' posts on Twitter.

They found that, as the official number of cases increased and decreased, so did the volume of informal media reports about cholera.

Rumi Chunara, a research fellow at HealthMap and Harvard Medical School, United States, and lead author of the study, emphasised that these informal reports were available online up to two weeks before official government reports, which had to go through the traditional chain-of-command structure of public health.

This means they could be used to get earlier estimates of a disease outbreak — "gain early insight into an evolving epidemic" — and help plan a response sooner.

Chunara highlighted that "using informal media is cost-effective, rapid, and can be used to reach populations that otherwise wouldn't have access to traditional healthcare or would not seek it".

Other advantages include finer temporal and spatial resolution, and the study says informal media could be used to study the activity of other disease outbreaks around the world.

James Wilson, executive director of the Haiti Epidemic Advisory System — a bio-surveillance reporting network created to support early warning of cholera hotspots in Haiti — told SciDev.Net that sources like Twitter were useful for connecting ground responders to each other, but warned that they may not work as a primary source of information on outbreaks to those involved in ground detection.

Social media reports were "often inaccurate due to the geographic bias of the journalists" because most of them were based in the capital city, Port-au-Prince, said Wilson.

Chunara recognised that informal data sources could be biased towards urban or developed areas, and certain age groups, and may contain false alerts, which has to be taken on board.

But she added that the informal data could complement official data in an outbreak to get timely estimates of disease dynamics.