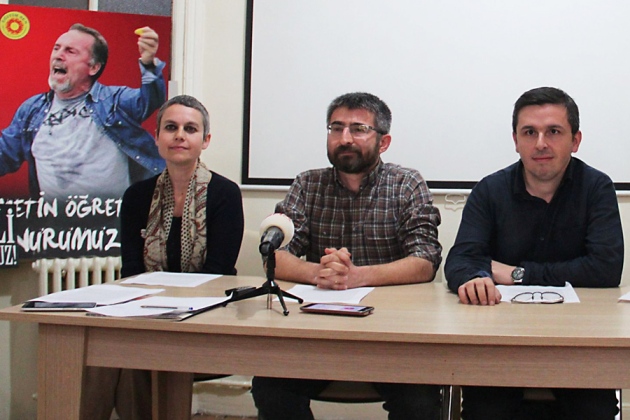 Esra Mungan, Muzaffer Kaya and Kıvanç Ersoy (left to right) at a press conference affirming their support for a peace petition. The three academics have now been arrested.

Three Turkish academics in Istanbul have been arrested and are being held in prison on suspicion of ‘making terrorist propaganda’, after they signed a petition in January calling for an end to violence between government forces and Kurdish separatists in Turkey’s southeast.

A British computer scientist working in Istanbul who protested against their arrests was himself detained and is now leaving the country.

Psychologist Esra Mungan at Boğaziçi University, mathematician Kıvanç Ersoy from Mimar Sinan University and political scientist Muzaffer Kaya from Nişantaşı University were taken in for questioning on 14 March and have now been formally arrested and held without bail. Four days earlier, the three had held a press conference affirming their commitment to the ‘academics for peace’ declaration, which was launched more than two months ago and was quickly signed by more than 1,100 Turkish academics and several hundred Western intellectuals, including linguist Noam Chomsky.

“The three jailed academics have committed no crime and should be immediately released,” says Emma Sinclair-Webb, senior Turkey researcher at the civil-rights group Human Rights Watch, which issued a press statement about the arrests.

Most Turkish researchers who signed the petition have since come under investigation by their universities — and in January some were brought in for police questioning and subsequently released — after Turkey’s president Recep Tayyip Erdoğan accused signatories of spreading Kurdish terrorist propaganda and undermining the country’s national security. Erdoğan said that the failure of the declaration’s text to refer to violence carried out by the Kurdish groups, particularly the militant Kurdistan Workers’ Party (PKK), constituted support for terrorists.

At least 30 academics, including Kaya, have already been fired from their posts, and 27 others suspended, according to Human Rights Watch.

“These first arrests are likely to be the tip of the iceberg,” says Gareth Jenkins, a political analyst based in Istanbul. “The next weeks could see a wave of them in jail.” Turkey’s government has a history of imprisoning scientists on charges associated with terrorism offences.

Chris Stephenson, a British computer scientist at Bilgi University who protested against the arrests at the Istanbul police station, was himself detained on 15 March. He is now leaving the country before waiting to find out if he whether he will be formally deported, according to Turkish media. Police were reported as having found him in possession of leaflets supporting the PKK, but other reports say that his bag contained only invitations to Kurdish New Year celebrations on 21 March. (Erdoğan has banned all such celebrations).

Other signatories at Turkish universities are feeling nervous, according to Cem Say, a computer scientist at Boğaziçi University.

The day before Stephenson’s arrest, Erdoğan said — in the wake of a bomb attack in the Turkish capital Ankara — that he wanted to widen the definition of the word terrorist. He said: “It might be the terrorist who pulls the trigger and detonates the bomb, but it is these supporters and accomplices who allow that attack to achieve its goal. The fact their title is politician, academic, writer, journalist or head of a civil society group doesn’t change the fact that individual is a terrorist.”

Say did not sign the ‘academics for peace’ declaration himself because, he says, he felt it to be unbalanced and unhelpful. But he says that he “wouldn’t have guessed that something like this would happen — it is extremely disturbing”.