Rocket failure A Falcon 9 rocket made by commercial-spaceflight company SpaceX exploded on the launch pad at Cape Canaveral in Florida on 1 September. The event occurred two days before the craft was set to carry an Israeli communications satellite into orbit. The cause of the explosion, which happened in the minutes leading up to a planned engine test, is under investigation. The rocket’s payload, the AMOS-6 communications satellite, was also destroyed. It had been intended to provide Internet connectivity across sub-Saharan Africa.

‘Ring of fire’ eclipse glows in African sky A spectacular ‘ring of fire’ annular solar eclipse passed over southern parts of Africa and the Indian Ocean on 1 September. Astrophotographers captured the glowing ring of the Sun (pictured, as seen from Réunion) for the roughly three minutes of the eclipse. Annular eclipses happen when the Moon and Earth are slightly farther away from one another in their orbits than they are during a total eclipse, so the Moon appears smaller when it passes across the face of the Sun. The resulting ring is known as an annulus. The next annular eclipse will be fleetingly visible, for 44 seconds, over the south Atlantic Ocean on 26 February 2017. 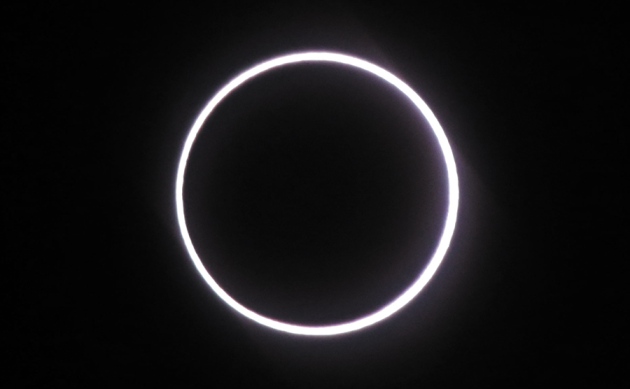 Academics sacked Under state-of-emergency provisions, Turkey’s government issued a decree on 1 September that sacked 2,346 university staff for alleged ties to an attempted military coup in July. The move is part of a wider purge of 40,000 civil servants who will be excluded from holding any government positions in the future. Academic organizations in Turkey have protested that some of those fired are not part of the Gülen religious movement, which the government says was behind the coup, but opponents of certain government policies. More than 40 had been signatories of the ‘academics for peace’ petition released in January that called for an end to violence between government forces and Kurdish separatists, and which led to the immediate arrests of some signatories.

Brexit warning Japan’s government has issued a 15-page warning over the United Kingdom’s pending exit from the European Union. A memo posted online by Japan’s foreign ministry lists requests from Japanese businesses operating in Britain, including continued access to EU research funding and the ability to take part in EU research projects. The document also warns that if the European Medicines Agency moves from its present location in London, money and researchers could be shifted to continental Europe.

Gorilla on the brink The latest update of the IUCN Red List of Threatened Species, which tracks the health of animal and plant populations, has moved the eastern gorilla (Gorilla beringei) from the endangered to the critically endangered category, after a 70% crash in the primate’s numbers in two decades. However, the giant panda (Ailuropoda melanoleuca) shifted from endangered to vulnerable as a result of increased protection helping its numbers. Two plants endemic to Hawaii, Cyanea marksii and Wikstroemia villosa, were listed as critically endangered, having previously been thought to be extinct.

Boon for Paris deal In a milestone step, the world’s two biggest greenhouse-gas emitters, the United States and China, have ratified the Paris climate agreement. Last December, nearly 200 nations made a deal to cut emissions and keep global temperature increases to “well below” 2 °C. For the agreement to enter into force, 55 nations accounting for at least 55% of global emissions need to ratify the deal. Together, China and the United States generate some 38% of global carbon emissions. Before 3 September, only 24 signatories had ratified the deal, representing around 1% of global emissions. The move is expected to prompt a surge in ratifications.

UK chief of chiefs The UK government opened applications on 30 August for the post of chief executive of UK Research and Innovation (UKRI), the body that will unite the country’s nine existing research-funding bodies. The job comes with a salary package of around £300,000 (US$400,000). The salary — about twice that of existing research-council chiefs — should be enough to lure university heads, say observers. The head of UKRI, which is yet to be created by parliamentary legislation, will oversee an annual budget of more than £6 billion.

Free Neanderthal A newly sequenced Neanderthal genome is available to download for free, before formal publication, researchers have announced. A team led by Svante Pääbo at the Max Planck Institute for Evolutionary Anthropology in Leipzig, Germany, has released the genome sequence of a roughly 45,000-year-old Neanderthal bone from Vindija Cave in Croatia before publishing its own analysis of the data (see go.nature.com/2bv1shu). The researchers say that they want to allow other teams to start their own analyses.

Lost Philae found Photos taken by the mothership of Philae, the European Space Agency’s comet lander, have revealed the craft’s location definitively for the first time. Philae landed on comet 67P/Churyumov–Gerasimenko in November 2014, but it failed to grip the comet’s surface and bounced into a shady spot. The lander’s tilted position meant that its antenna was partially blocked, making communication difficult, and it was unable to use its solar panels to charge its batteries. The pictures, taken by the Rosetta spacecraft’s OSIRIS camera on 2 September, confirm that Philae is lying on its side in the shadow of a cliff, lodged in a crack, with one of its legs in the air (pictured). See go.nature.com/2c90rwu for more. 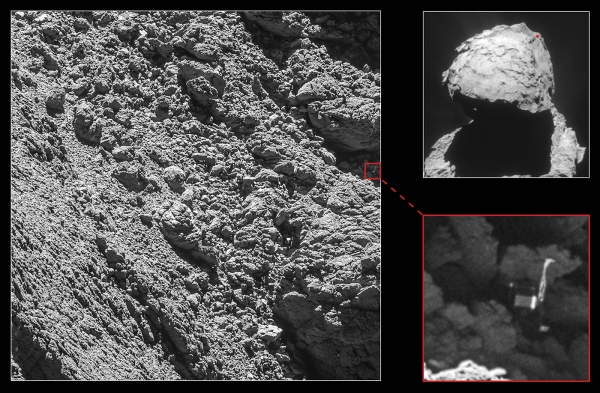 Macchiarini inquiry Paolo Macchiarini, a disgraced surgeon who was formerly a visiting professor at the Karolinska Institute (KI) in Stockholm, worked in an environment that fostered a “culture of silence” and a “nonchalant attitude towards regulations”. Those are the conclusions of two independent inquiries initiated by the KI and its affiliated university hospital, where Macchiarini carried out three artificial-trachea operations, including the world’s first, between 2011 and 2013. Two of the patients died. Allegations of misconduct against Macchiarini emerged in 2014, but the KI cleared him. A Swedish documentary about his work, aired in January, reopened the issue. The KI dismissed him in March. Macchiarini said this week in a statement to Swedish broadcaster SVT that he is not guilty of research mismanagement, and has always done the best for his patients. Two members of the KI’s Nobel Assembly, which awards the medicine prize, have been asked to resign as a result of their links to the affair. See page 137 for more.

Roger Tsien dies Nobel-prizewinning chemist Roger Tsien, who used a jellyfish protein to illuminate molecular biology, died on 24 August, aged 64. Tsien’s work with green fluorescent protein turned it into a laboratory staple as researchers around the world used it to label molecules to track their expression and movements in living cells. Tsien worked at the University of California, San Diego, and shared the chemistry Nobel with two other researchers in 2008. See go.nature.com/2clfomy for more.

Gene-drive vote Members of the International Union for Conservation of Nature (IUCN) have voted for a moratorium on research into the use of gene drives for conservation. Gene drives allow genetic modifications to be rapidly spread through wild populations, and some people have proposed that they could be used to wipe out invasive species and restore natural ecosystems. But the approach raises concerns about possible unintended consequences of releasing gene drives into the environment.

Animal research In a policy turnaround, the Alliance of Science Organisations in Germany has launched an Internet platform for education and discussion on research with animals (tierversuche-verstehen.de). Germany has been criticized for bucking the European trend towards openness on animal research. The website, launched on 6 September, allows interactive discussion and provides a service to journalists seeking scientific expertise. It includes extensive information — also through a YouTube channel — on the legal environment for such research, as well as personal stories from scientists who work with animals, including non-human primates.

Seaweed farming has undergone astonishing growth over the past 50 years, says a report from the United Nations University released on 4 September. In 2014, the industry produced more than 25 million tonnes of seaweed, mostly for food, with a value of US$6.4 million. Widening uses for the crop, including in fertilizers and drugs, are driving growth. But seaweed can spread diseases, and few regulations existto safeguard against this, the report says. The industry should learn from other agricultural sectors, it adds. 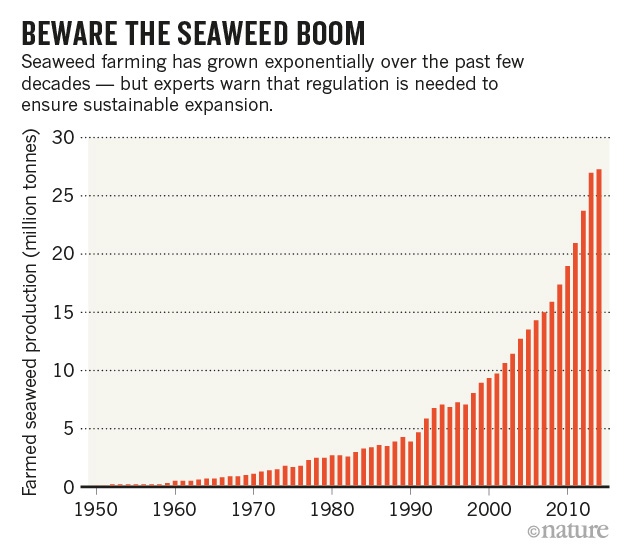 30%
The decline in Africa’s savannah elephant population from 2007 to 2014, equal to about 144,000 elephants. The current rate of decline is 8% per year, with poaching mainly to blame.
Source: Great Elephant Census