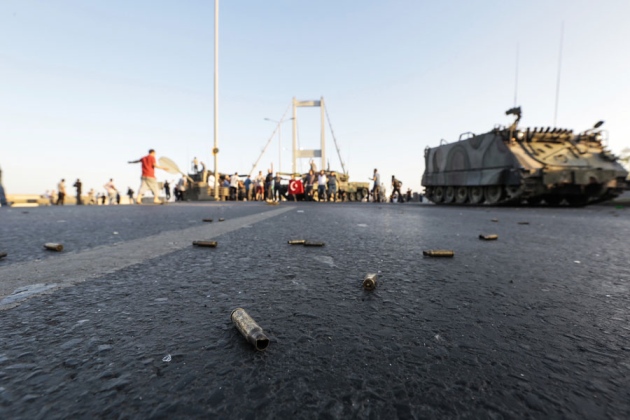 Bullet cases littered the ground of Bosphorus bridge after an attempted military coup in Turkey in July.

The sackings, announced in a 1 September decree as part of a wider purge of 40,000 civil servants, are the first of an expected wave of dismissals under powers granted by state-of-emergency rules following the coup. Those fired are unable to appeal, cannot hold any government positions in the future, and will have their passports revoked.

Turkey’s government has blamed the Gülen movement — a religious organization — for the coup attempt. But academics have protested that some of those now being fired are not Gülen followers, but simply opponents of particular government policies. More than 40 of those sacked, for example, had in January signed an ‘Academics for Peace’ petition that had called for an end to violence between government forces and Kurdish separatists.

Hundreds of the signatories of that petition have already faced investigations and several have been suspended, according to a website set up by some of the petition’s supporters. “This latest attempt to purge Academics for Peace by linking them to coup plotters is outrageous and unacceptable,” a statement on the petition’s website said.

“Academics with absolutely no links with the Gülenists, who had even actively opposed Gülenists in the past, are being sacked alongside suspected sect members,” said the Association of University Councils — an academic society that represents young researchers — in a press statement.

The Gülenists had been close allies to the government of Recep Tayyip Erdoğan and had used the connection to place their supporters in key positions in the judiciary, education and science. But in 2013, the alliance broke down and Erdoğan (who has been Turkey's president since 2014) designated the Gülen movement a terrorist group.

More firings of academics are anticipated. In the first days of the state of emergency that was declared after the coup attempt, the Turkish Council of Higher Education (YÖK) told universities to identify and side-line academics and administrators suspected of being Gülenists.

“Many of those fired were already under investigation. It was completely unexpected that so many would be sacked en masse, before the investigations were concluded,” says Mehmet Somel, an evolutionary biologist from the Middle East Technical University in Ankara.

In July, the YÖK had also ordered all 1,577 of the country’s university deans to leave their posts; although they may reapply for their jobs, the move seemed designed to tighten Erdoğan's political control of the higher education sector. And it told all academics who were out of the country to return home. Meanwhile, the science agency TÜBİTAK has suspended its fellowships and postponed all major project-funding calls.

The Association of University Councils says that the government's measures after the coup are “systematically harming science in Turkey”.