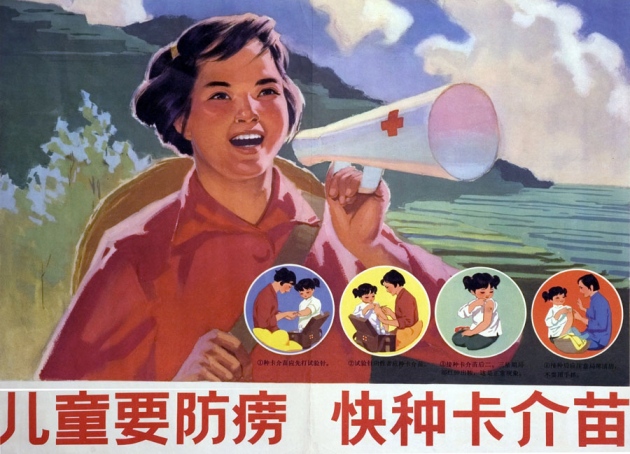 A Chinese poster dated to the early 1960s aimed to raise awareness of tuberculosis and to encourage parents to take their children to the doctor to receive the BCG vaccine.

From the dawn of agriculture to the fall of the Soviet Union, major events in human history have left marks in the DNA of the bacterium that causes tuberculosis (TB). A study of nearly 5,000 samples of Mycobacterium tuberculosis from around the world shows how a lineage of the bacterium that emerged thousands of years ago in Asia has since become a global killer that is widely resistant to antibiotic drugs1.

Although M. tuberculosis probably first emerged some 40,000 years ago in Africa2, the disease did not take hold until humans took to farming — with the consequent settling down — says Thierry Wirth, an evolutionary geneticist at the National Museum of Natural History in Paris and lead author of the study.

The grouping together of people in settlements made it easier for the respiratory pathogen to spread from person to person, says Wirth. A previous analysis by his team had shown that the common ancestor of all the M. bacterium strains circulating today began spreading around 10,000 years ago in the ancient Fertile Crescent2, a region stretching from Mesopotamia to the Nile Delta that was a cradle of agriculture — enabling lots of people to live in close proximity. “It’s basically a dream setting for a bug like TB,” says Wirth.

But of all the M. bacterium strains circulating today, few strike more fear in public-health officials than the ‘Beijing lineage’. First identified in greater Beijing in the mid-1990s3, this lineage now circulates throughout the world and many strains are resistant to drugs that vanquish other types of TB.

Wirth’s team collected and analysed 4,987 samples of the Beijing lineage from 99 countries, fully sequencing the genomes of 110 of them and more limited stretches of DNA in the rest. The researchers then used the information to date the expansion of the lineage and show how the strains are related.

Several ups and downs in the prevalence of a family of TB bacterium strains that originated in Beijing followed major social and economic events.

Consistent with its name, the Beijing lineage did indeed emerge near north-eastern China, Wirth’s team report in Nature Genetics1. And it did so around 6,600 years ago, the researchers found, which coincides with archaeological evidence for the beginnings of rice farming in China’s upper Yangtze River valley4.

Travel along the Silk Road, which connected China with the Middle East, probably helped to spread the lineage beyond East Asia, the researchers say. So did more recent waves of Chinese immigration: a branch of the bacterium that circulates in the Pacific may have taken hold when Chinese people migrated to the Pacific Islands in the 1850s; and the rise of branches common in former Russian republics of Central Asia could be linked to the arrival and dispersal of Chinese immigrants there during national uprisings in Kyrgyzstan, Kazakhstan and Uzbekistan in the 1860s and 1870s.

Global upheavals also propelled the rise of the Beijing lineage. The team used the whole-genome sequences to model how its population changed over time and showed that numbers of the bacterium (and, therefore, people infected) shot up in the early nineteenth century, possibly because of the rise of urban populations during the Industrial Revolution. It spiked again in the early twentieth century, which Wirth says could be related to further urbanization after the First World War and exacerbated by influenza pandemics at the time, which made people more susceptible to TB.

The increasing availability of antibiotics in the 1960s, meanwhile, coincides with a fall in the numbers of the bacterium. The lineage bounded back, however, in the late 1980s and early 1990s. Wirth’s team notes that these dates are bookended by the rise of HIV/AIDS and the collapse of the Soviet Union. The disintegration of the Soviet health system has been widely cited as factor in the rise of TB and its multi-drug-resistant forms.

Since its emergence, the Beijing lineage has become much more infectious, Wirth says, so it out-competes other strains of the bacterium. His team identified mutations related to antibiotic resistance, metabolism and evasion of immune responses that may have contributed to the success of the Beijing lineage.

Anne Stone, an evolutionary geneticist at Arizona State University in Tempe, is impressed by the number of samples that Wirth’s team examined. The 6,600-year date that the team calculated for the emergence of the Beijing lineage clashes with an estimate that she and her colleagues published last year, which put the emergence at around 1,200–2,400 years ago5. That study was based on TB genomes collected from 1,000-year-old Peruvian mummies and used different dating methods. But Stone now wonders if her team’s estimate is on the young side. “Looking at this study, I’m thinking ‘hmm we should play with this data set’,” she says.

In an earlier version of this article, the caption to the poster image stated, incorrectly, that it dated back to the early 1920s.