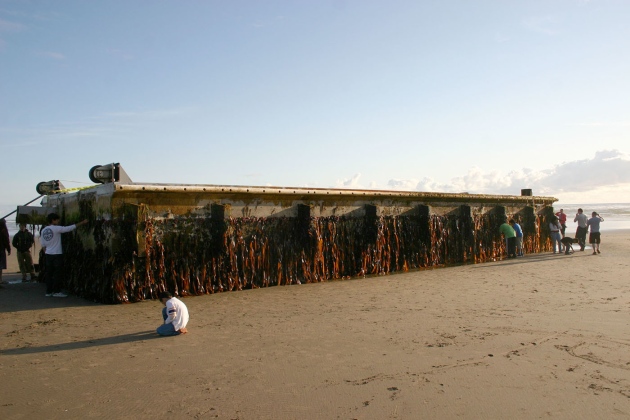 Tsunami debris included this Japanese dock, which washed up on the shores of Oregon.

Two years after a tsunami devastated parts of Japan, a small black-and-white-striped fish washed ashore in Long Beach Peninsula, Washington. The barred knifejaw (Oplegnathus fasciatus), which is native to Asian waters, had made the 7,000-kilometre trip in the stern well of a deserted fishing vessel set adrift by the giant wave.

The knifejaw found in 2013 is just one of hundreds of species carried across the Pacific Ocean to North America by debris — estimated to weigh a total of nearly 1.5 million tonnes — that was swept out to sea after the Tohoku earthquake in March 2011. As extreme coastal weather events such as hurricanes, typhoons and tsunamis become more intense and frequent as a result of climate change, researchers warn that such mass-migration events could also become more common.

James Carlton, a marine ecologist at the Maritime Studies Program of Williams College and Mystic Seaport in Mystic, Connecticut, and his colleagues worked with more than 100 volunteers to look for tsunami debris along North American shores, including the west coast of the United States and Canada, as well as Hawaii. Over almost 5 years starting in 2012, they intercepted 634 objects that could be traced back to the tsunami, ranging in size from small fragments of plastic to fishing vessels and mooring docks (see ‘Mass migration’). Between them, they carried from Japan 289 species of living invertebrates and fish, the researchers report in Science1. Some of the creatures had survived adrift for several years.

That’s just a fraction of the “thousands or tens of thousands” of objects estimated to have landed in North America, says Carlton. And he suspects there are more to come. “Many of these can subsist in the ocean for longer than we could imagine,” he says. “We had no idea this would last into 2017.” 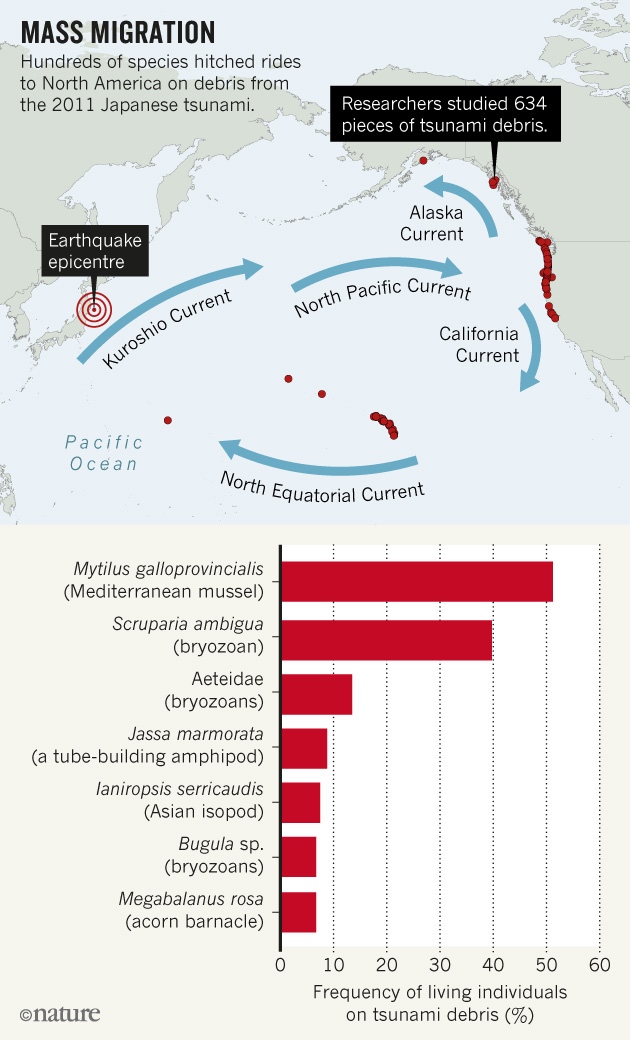 The team began its search when a 165-tonne dock — made of concrete, steel and polystyrene foam — washed up on the coast of Oregon, 15 months after the disaster. This ‘megaraft’ was coated with almost 100 different species. It was a harbinger, Carlton says, of the need to monitor what else might be coming. More-recent debris has not been so species-rich; only one object hosting more than 20 species has been found since summer 2015.

The team’s finds included gooseneck barnacles (Lepas sp.) that blanketed the bottom of a wrecked fishing boat and a Japanese limpet (Siphonuria sirius) that had hitched a ride on a buoy. Most of the creatures arriving were invertebrates: molluscs, annelid worms, cnidarians (jellyfish and their relations), crustaceans and moss-like marine invertebrates called bryozoans. It is unusual for vertebrates such as the knifejaw fish to be carried so far, says Gail Ashton, a marine ecologist at the Smithsonian Environmental Research Center in Tiburon, California.

The mass migration raises the concern that some of these trans-Pacific passengers might establish invasive populations on the North American coast. None of the species has been spotted doing so yet. But “the fact that they’ve lasted in the ocean for four or five years shows they’re pretty hardy”, says Ashton. And by the time any species do settle, says Carlton, it could be too late to do anything about it. Once a population is common enough to see, he says, “it becomes harder to manage eradication”.

Such a huge rafting event is unprecedented, say the researchers. Japan has seen only two other earthquakes with magnitudes comparable to Tohoku in the last few centuries; they occurred in 1896 and in 1933. “If you look at photos of the same coasts in those years, there are small villages with wood houses,” says Carlton. “Back then, a tsunami could not generate this sea of plastic we saw in 2011.”

Biodegradable objects such as wood would rarely survive such a long trip. The study underscores the far-reaching consequences of plastic in the environment, says Jenna Jambeck, an environmental engineer at the University of Georgia in Athens. “Once something enters the ocean, it becomes a global problem.”