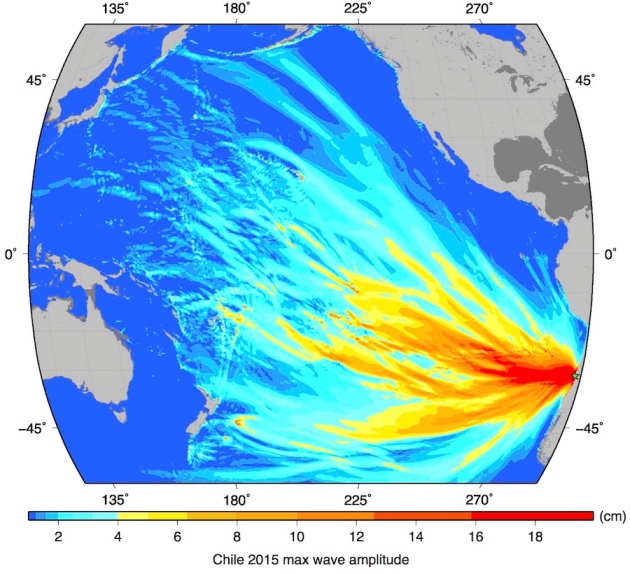 A simulation of tsunami waves expected from the Chile earthquake.

A 8.3-magnitude earthquake that struck near the coast of central Chile has reportedly led to the deaths of at least eight people and triggered a Pacific-wide tsunami that could reach distant shorelines — but specialists expect little damage.

The tsunami waves reached heights of more than 3 metres above tide level along some Chilean coastlines. But timely warnings and the evacuation of 1 million people seem to have limited the harm caused. Most of the many international telescopes hosted in Chile also survived unscathed, except for minor damage to one observatory.

According to the US Geological Survey, the quake struck at 19:54 local time (22:54 GMT) on 16 September at a depth of 25 kilometres, near the city of Valparaiso. The Pacific Tsunami Warning Center (PTWC) in Ewa Beach, Hawaii, issued a warning for more than 25 countries, including Mexico, New Zealand, Japan and Russia.

Powerful quakes are common along the geological fault zone that intersects Chile from north to south. An 8.2-magnitude quake struck northern Chile in 2014, while an 8.8-magnitude earthquake in 2010 hit further south and killed more than 700 people. The 2010 quake released three times more strain energy than the current quake, says Costas Synolakis, a tsunami specialist at the University of Southern California in Los Angeles.

Tsunami forecasters said that the waves could still reach up to 1 metre above normal in Mexico, Hawaii and Japan, and researchers hope to gain updated information on the speed and magnitude of the tsunami waves propagating across the Pacific.

A rush in the aftermath

In California, tsunami researchers hurried to Ventura Harbor, more than 100 kilometres north of Los Angeles, where strong currents were reported in 2010 following the Chile quake. They deployed lab-made floats with GPS equipment to try to measure the currents they saw sweeping into the harbour, says Synolakis. If the floats work, their data would provide "the first ever continuous measurements of a tsunami in a real port," he says.

The earthquake slightly damaged Chile’s Southern Astrophysical Research (SOAR) telescope, based in Cerro Pachón. The telescope, operated by a US-Brazil collaboration, will be out of operation until at least next week, says the telescope’s director, Stephen Heathcote. The team needs to fix a misalignment of instruments the telescope uses for tracking and positioning.

But other telescopes in the country seem to have survived the quake unscathed, including the Very Large Telescope in Paranal and the Atacama Large Millimetre Array (ALMA) in Chajnantor, according to spokespeople for the observatories.

Scientists fear that the ‘Big One’ is still waiting to happen in Chile. Geologists think that it would take a 9.0-magnitude shock to relieve the seismic stress that has built up in the region over the last decades.

The Great Chilean Earthquake in 1960 — the largest ever recorded worldwide, at a magnitude of 9.5 — triggered 25-metre tsunami waves that crossed the Pacific at high speed and killed hundreds of people.

11:51 GMT 18 September: This article has been updated to include details of damage reported to Chile’s Southern Astrophysical Research (SOAR) telescope.