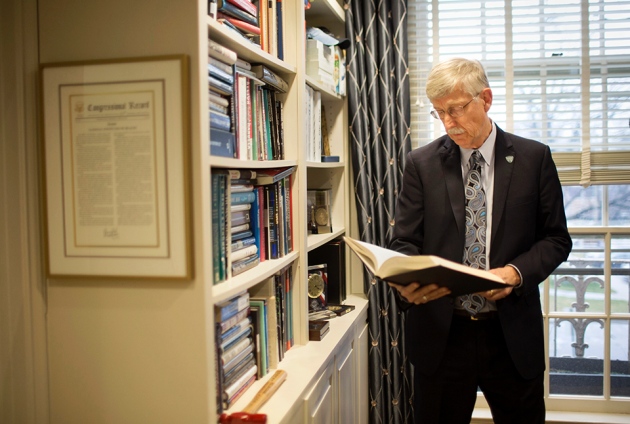 Francis Collins in his office at the National Institutes of Health.

US President Donald Trump has chosen Francis Collins to lead the National Institutes of Health (NIH) on a permanent basis, the White House announced on 6 June. Collins, who has led the agency since August 2009, is a holdover from the administration of president Barack Obama — and is now the first NIH director since the 1970s to be chosen by two presidents.

Before taking over the top job at the NIH, Collins was perhaps best known for his leadership of the Human Genome Project, which in 2000 published the first ‘rough draft’ of the genome. As NIH director, Collins has launched several large research projects, including the Brain Research Through Advancing Innovative Neurotechnologies (BRAIN) initiative to map the human brain; the Precision Medicine Initiative, which includes an ambitious study of health records and genomic information from one million people in the United States; and the Cancer Moonshot, a US$1-billion proposal to double the pace of cancer research in five years.

Trump has put forth several proposals to reshape how the biomedical-research agency functions — including a plan to cut the NIH budget by 18% in 2018, to US$26 billion. Much of the savings would come from changing the system that the NIH uses to reimburse grantees’ institutions for expenses such as administration and facilities maintenance, which are collectively known as “indirect costs”. It is not clear whether Congress will go along with this plan; in early May, lawmakers approved a 2017 budget that increased the NIH’s funding by $2 billion over the 2016 level, to about $34 billion.