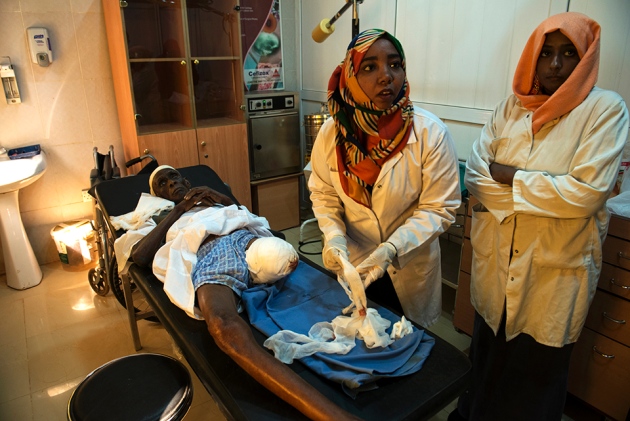 Researchers at the Mycetoma Research Centre in Khartoum, Sudan, treat a person with mycetoma.

Diseases don’t respect borders, laws or walls. And efforts to combat them rely on networks of scientists to detect outbreaks early, understand how the diseases operate and then intervene. Researchers say that President Donald Trump’s travel ban challenges that process, putting the United States at risk.

The policy, enacted on 27 January, bars refugees from entering the country for 120 days, except those from Syria, who are banned indefinitely. Citizens of Iran, Iraq, Libya, Somalia, Sudan, Syria and Yemen are banned for 90 days. On 1 February, the White House said that the order did not apply to people from those countries who hold US permanent-resident visas, or green cards.

Still, “the ban could hamper our ability to learn about the epidemiology of neglected diseases emerging out of conflict zones”, says infectious disease expert Peter Hotez at Baylor College of Medicine in Houston, Texas. For example, leishmaniasis is spreading in occupied areas of Syria and Iraq, and schistosomiasis is spreading in Yemen. “Scientific communities across the world need collaborators in these countries who can combat epidemics before they arrive in the US,” Hotez says.

The ban has already disrupted work on a vaccine for leishmaniasis, says Farrokh Modabber, an Iranian infectious-disease scientist with collaborators at the US National Institutes of Health and the Pasteur Institute of Iran, among others. They've already discussed whether to cancel an upcoming meeting due to travel concerns, but Modabber is also worried about how the US immigration stance could affect their work in the long term. US-led teams have been developing tropical disease vaccines and drugs over the past decade, he says, but testing them could be difficult or impossible without the involvement of scientists in those countries where the diseases are endemic.

Sudanese scientists on the frontlines of tropical disease are stunned as well. In Sudan’s capital Khartoum, Ahmed Fahal, directs the Mycetoma Research Centre — the world’s only research centre devoted to a potentially lethal condition caused by flesh-eating fungi and bacteria. Although mycetoma afflicts impoverished people in at least 23 countries, vanishingly little is known about the malady and there’s no reliable cure.

Last May, the World Health Organization added mycetoma to their list of tropical diseases that require attention. Soon after, Fahal was invited to speak at this year’s American Society of Microbiology conference in New Orleans, Louisiana, in June. He had planned to talk with scientists from the US Centers for Disease Control and Prevention about monitoring mycetoma, and to find collaborators from universities in the United States, India and Nigeria. Now, Fahal fears he must cancel his plans. “It’s a big blow,” he says.

The US policy has also hampered scientists fighting river blindness. The disease is caused by the parasite Onchocerca volvulus, which is spread by blackflies, and often leads to irreversible blindness. About 37 million people are infected across Africa, Latin America and Yemen. Last November, a Sudanese and American team reported the elimination of river blindness in northern Sudan, the first time this had been done in Africa. The work was supported by former president Jimmy Carter’s foundation, the Carter Center in Atlanta, Georgia.

The centre holds an annual meeting in late February with its donors and scientists to plan the coming year. But Isam Zarroug, who directs Sudan’s river-blindness programme, can no longer attend due to the ban. He worries that missing that opportunity to make crucial contacts could jeopardize his team’s efforts to fight the disease in conflict-laden regions of the country at its border with Ethiopia and South Sudan. His colleague, Tarig Higazi, a scientist at Ohio University in Athens, says he’ll probably cancel his field season this summer in Sudan. Although he’s now a US citizen, he worries that erratic changes in the immigration policy might separate him from his family in Ohio.

That’s what has happened to Arash Alaei, a HIV researcher at the University at Albany in New York, whose colleague and brother has been stranded in Iran owing to the ban. In addition, Alaei says his projects involving HIV in Iraq and medical training in Syria are now in danger. And he worries that the travel ban could extend to countries such as Pakistan, Afghanistan and Turkey, where he and his colleagues focus on intravenous drug use, HIV and hepatitis C. “I invite scholars to come here to the US, where they can safely talk,” he says.

Alaei knows first-hand how important ties with the global scientific community are. When he and his brother were jailed in 2008 for running Iran’s first HIV harm-reduction programme, researchers and AIDS activists successfully rallied for his release. “The most important message I heard in my solitary cell in Iran was that there were people speaking out about us and it meant we were not forgotten,” he says.

It takes a village

Public health is just one beneficiary of cross-border partnerships. Some policy analysts say scientific collaboration improves national security. If countries can respond to crises ranging from Ebola outbreaks to nuclear spills on their own, Americans are at less risk, says Hotez. Apolitical science partnerships make for good diplomacy, he adds.

Approval of the United States has declined from 25% in 2009 to 15% in 2012 in Muslim-majority countries, according to the Pew Research Center, a non-profit organization in Washington DC. But respect for US science has remained high in these countries.

“The premise of the US executive order is that it is needed to keep the US safe,” says Mohamed Hassan, director of The World Academy of Science in Trieste, Italy. “But nobody from Sudan has ever committed a terrorist action against the US. Some people have suggested that the order gives terrorists leverage for recruiting new members, and I worry they could be right.”

Building rapport also encourages scientists from other countries to be open with those in the United States about mysterious outbreaks on their soil, despite the potential harm this could cause to their economy, says Hotez. He worries that the isolating effect of the ban could spread to Muslim-majority countries not yet listed. Thomas Bollyky, a senior fellow at the Council on Foreign Relations, a think tank in Washington DC, agrees. “There’s no evidence to suggest this measure would have stopped the terrorism we’ve seen,” he says. “So, if you’re a scientist from a Muslim country not included in the ban, you’d be rightly concerned that your country may be added too.”

Hotez notes that it was collaboration — not isolation — that ended the latest Ebola outbreak. “The only way to prevent emerging diseases from coming to the US is to stop them in their tracks in the countries where they arise,” he says. “We didn’t stop Ebola by making a nurse freeze her ass off outside of a New Jersey airport, we stopped Ebola by having our top scientists go there and work with scientists in those countries.”

The original version of the article said that Alaei has projects on HIV in Iraq and Syria. In fact, his work in Syria focuses on training young doctors.