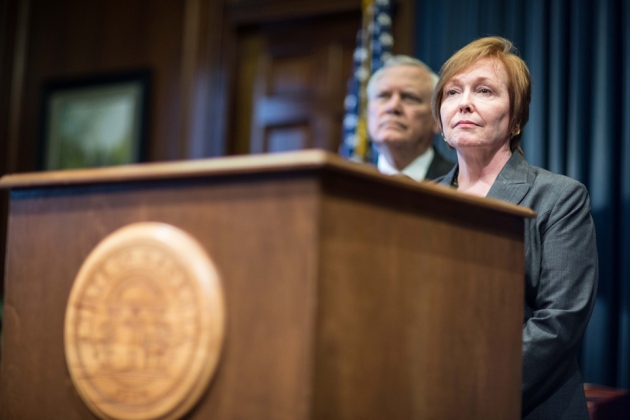 Obstetrician and gynaecologist Brenda Fitzgerald will direct the US Centers for Disease Control and Prevention (CDC), Secretary of Health and Human Services Tom Price announced on 7 July.

“She has a deep appreciation and understanding of medicine, public health, policy and leadership — all qualities that will prove vital as she leads the CDC in its work to protect America’s health 24/7,” Price said in a statement.

Fitzgerald has led the Georgia Department of Public Health since 2011, and has championed early-intervention programmes to improve maternal health and counter childhood obesity. Before that, she practised medicine, advised former Speaker of the US House of Representatives Newt Gingrich on health-care policy, and served in the US Air Force.

“Dr Brenda Fitzgerald is a solid choice as the new director of the CDC,” said Donna Petersen, chair of the Association of Schools and Programs of Public Health in Washington DC and dean of the College of Public Health at the University of South Florida in Tampa, in a statement. “Her leadership of the Georgia Department of Public Health has given her first-hand experience in dealing with the many challenges facing state and local health departments.”

Fitzgerald's appointment does not require confirmation by the US Senate, unlike many other top government jobs.

At the CDC, she will lead efforts to combat and prevent infectious and chronic diseases. If President Donald Trump has his way, she would have to do so with US$1.2 billion less in 2018 than the agency received in 2017. It is not clear whether Congress will go along with the president's plan, however.

Fitzgerald entered the public-health realm in 2011 when the newly elected Governor of Georgia, Nathan Deal, asked her to advise him on medical issues. Fitzgerald pointed out concerns over the organization of the state’s public-health efforts, and the governor decided to hand her the department's reins. “I really saw my life as going from seeing one patient at a time to going to see ten million at a time,” Fitzgerald said in an interview in 2015.

While making that transition, Fitzgerald led a reorganization of the state's public-health programmes, and worked tirelessly to earn extra support — and funding — for her department from a conservative state legislature during a financial downturn, says Phillip Williams, dean of the College of Public Health at the University of Georgia in Athens.

There have been some bumps along the road. In 2014, Governor Deal was reported to have said that the Ebola virus could be killed by water. The gaffe was widely criticized and Deal blamed Fitzgerald, saying that she had misinformed him. But he also emphasized that he still believed her to be competent for her position.

Through it all, Fitzgerald has maintained a strong focus on mothers and children, which Williams attributes to both her medical background and her emphasis on hard data. "She's very data-driven," he says. "She has established systems to use the data to prioritize her policy- and decision-making."

She also has close ties to the schools of public health in the state, says Colin Smith, a social epidemiologist at Georgia State University in Atlanta and the incoming president of the Georgia Public Health Association. “She’s everywhere, every time I turn around,” he says. “Will that translate to the national level? I don’t know. But I sure know that she’s been a resource for Georgia.”

Fitzgerald has donated money to several Republican politicians over the years, according to a database maintained by the Center for Responsive Politics, a non-partisan group in Washington DC that analyses political donations. Other information collected by the US Open Payments programme, which holds data on the fees physicians receive from drug firms, shows that she received only $14 from pharmaceutical companies in 2015.