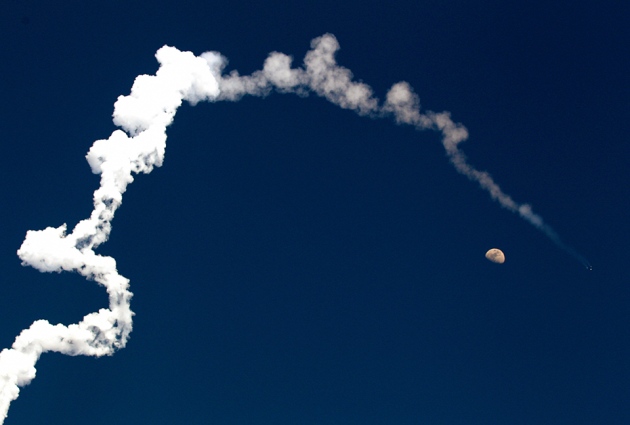 The Hitomi X-ray astronomy satellite launched in February, but broke up in space after a month.

The Japan Aerospace Exploration Agency (JAXA) is on a quest for redemption. In March, a software error caused the agency’s Hitomi X-ray astronomy satellite to break up in space, cutting short a planned three-year mission after only one month.

Now JAXA is considering whether to rebuild and relaunch a copy of the spacecraft’s key instrument — a US-built X-ray spectrometer — with help from NASA. On 5 August, representatives of the two space agencies will meet to discuss the possibility of resurrecting the instrument that was the heart of Hitomi’s science. But whether JAXA can regain the confidence of the Japanese nation, and of its international partners, remains to be seen.

Space experts note that JAXA has pulled off stunning recoveries before. It coaxed its crippled Hayabusa spacecraft to bring back dust from an asteroid, and nudged its Akatsuki probe into orbit around Venus 5 years after an engine failure seemed to render the spacecraft useless.

“It’s important to note how resourceful JAXA has been at recovering from failures that typically would be catastrophic,” says Ralph Lorenz, a planetary scientist at the Johns Hopkins University Applied Physics Laboratory in Laurel, Maryland, and co-author of the book Space System Failures (Praxis, 2005).

Hitomi broke apart because an erroneous software command prompted the spacecraft to spin faster and faster, until its solar panels flew off into space. A JAXA investigation blamed faulty project-management techniques for not catching the error.

The failure has reverberated at every level of JAXA’s Institute of Space and Astronautical Science (ISAS) in Sagamihara, which managed Hitomi. JAXA president Naoki Okumura was one of three leading officials who took a 10% pay cut for four months "to express our regret and caution ourselves", he said in a June press conference. He has also ordered a systems review of the institute’s next big project: a mission to study Earth’s radiation belts that is slated to launch in the coming months.

Before Hitomi, JAXA’s lowest point was perhaps the loss of its Nozomi mission to Mars, which sailed past the red planet in 2003 without entering orbit as it was supposed to. The same year, a new JAXA rocket design failed during a test launch, prompting a review of all agency projects.

Some have questioned whether JAXA is trying to do too much with too little. It often assigns one person to cover a number of tasks that NASA would spread among multiple project engineers, says Lorenz, who collaborates on the Akatsuki Venus probe.

“It’s important to note how resourceful JAXA has been at recovering from failures.”

Okumura has acknowledged as much, saying that ISAS will generally develop a mission using a small in-house team, along with the spacecraft manufacturer. By contrast, Hitomi involved a larger number of complex systems. There were simply not enough safeguards built into the process to catch the software error. “The previously conventional ISAS methods were not necessarily suited for the production of modern satellites and spacecraft,” Okumura said.

JAXA has released an extraordinary level of technical detail about the failure. Agency officials have said that because Hitomi was meant as a community mission to serve X-ray astronomers across the globe, they feel obligated to explain what happened so that nobody makes the same mistake.

Because of this determination and openness, “I think Hitomi’s successor is in safe hands with JAXA,” says Elizabeth Tasker, an astrophysicist at Hokkaido University in Sapporo, Japan.

But such projects may be a hard sell to politicians. “High-profile setbacks like Nozomi and Hitomi make it difficult for JAXA to justify big-ticket science missions in today’s political atmosphere,” says Saadia Pekkanen, an expert in Japanese space policy at the University of Washington in Seattle.

JAXA has not yet decided whether a Hitomi successor would fly or which instruments it would carry, says ISAS spokeswoman Chisato Ikuta. But Hitomi’s premier scientific instrument was the spectrometer provided by NASA; data that it collected before the spacecraft died revealed secrets about gas flows in the Perseus galaxy cluster.

The spectrometer seems to be thrice cursed; two earlier versions on different satellites were lost to a launch failure and a coolant leakage. Even so, a NASA advisory group reported on 5 July that launching a copy of the instrument no later than 2023 “would fulfill the immense scientific promise of the Hitomi” spectrometer. The cost to rebuild would be roughly US$70 million to $90 million.

Paul Hertz, NASA’s astrophysics director, will meet with JAXA representatives to discuss the options. “Certainly we would not be overseeing JAXA,” he told a NASA advisory committee on 20 July. “We can discuss practices that NASA implements to prevent us from making avoidable mistakes.”

Other international missions in the works from JAXA include a magnetospheric orbiter, which is scheduled to launch next year on the European Space Agency’s BepiColumbo mission to Mercury.

“The Olympics of engineering is when things go wrong,” says Lorenz. “Maybe the best time to fly is right after a failure.”