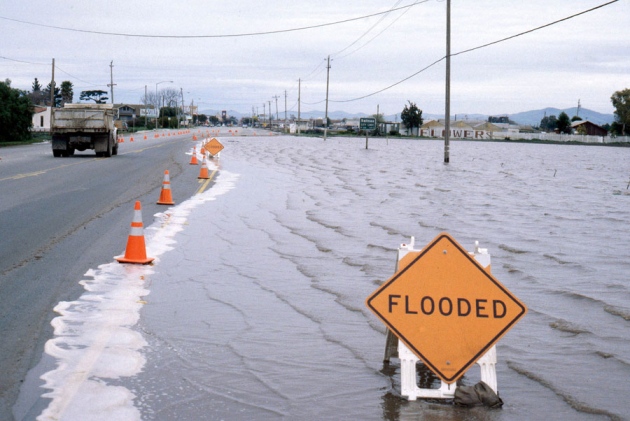 Extreme weather such as that seen in Salinas, California, in 1998 is not the only consequence of the El Niño-La Niña cycle: another one could be a slow-down in the rise of global temperatures.

A new study adds to mounting evidence that cooling in the tropical Pacific Ocean is the cause of the global warming hiatus, a slow-down in the rise of average temperatures that began around 1998.

The eastern equatorial Pacific is well known to have an outsize influence on global weather. Years-long ocean trends such as El Niño and La Niña cause alternate warming and cooling of the sea surface there, with effects on monsoons and temperatures around the world. Now a modelling study by researchers at the Scripps Institution of Oceanography in La Jolla, California, indicates that a decadal La Niña-like cooling trend affecting as little as 8% of Earth’s surface can explain the slower rise in global temperatures.

“The equatorial Pacific cooling turns out to be strong enough to offset the general rise in temperature induced by anthropogenic greenhouse gases,” says Shang-Ping Xie, a climate modeller at Scripps and co-author of the study, which is published today in Nature1. Just as importantly, he says, the model helps to explain regional trends that seem to defy the global warming hiatus, including record-breaking heat in the United States last year, and the continued decline of Arctic sea ice.

Scientists have explored various explanations for the hiatus, including a reduction in energy reaching Earth, attributable to a prolonged minimum in solar activity2; a decline in the amount of heat-trapping water vapour in the stratosphere3; and an increase in atmospheric levels of sun-blocking particles produced by industrial activities and volcanoes4. Previous studies have also linked Pacific cooling to the hiatus, and have suggested that as the ocean surface cools, currents deep beneath the surface are burying heat from the atmosphere5, 6.

In the latest study, Xie and his colleague Yu Kosaka ran computer simulations to investigate how sea surface temperatures observed in the eastern equatorial Pacific in the past several decades affected the global climate. They found that the observed La Niña conditions suppressed global average temperatures during the months of Northern Hemisphere winter, but allowed temperatures to continue to rise unabated during Northern Hemisphere summers, producing the apparently paradoxical regional highs.

Andrew Dessler, a climatologist at Texas A&M University in College Station, said the results convincingly show that the 'pause' in global warming is being driven mostly by ocean variability. “If this turns out to be correct,” he adds, “then it seems very likely that the energy being trapped by greenhouse gases is indeed going into the deep ocean.”

A study by researchers at the US National Center for Atmospheric Research (NCAR) in Boulder, Colorado, currently in press at Journal of Climate7, suggests that the decade-scale La Niña cooling alternates with an increase in global temperatures during decade-scale El Niño-like warming phases, one of which persisted during the 1980s and 1990s. Kevin Trenberth, a co-author of that paper, says that the Scripps study is “novel and useful” in demonstrating links between tropical ocean temperatures and global climate trends , even if it remains silent on what drives the trends.

For Xie, the study was an initial effort to reconcile seemingly contradictory data about regional and global trends. Some climate-change sceptics have tried to use the hiatus to discredit global warming, but Xie says that his results only bolster the link between greenhouse gases and climate change. How long this cool phase in the tropical Pacific will endure remains unclear, but it's just a matter of time: “The wake-up call is going to come some day when the Pacific Ocean decides to swing into a warmer state,” he says.