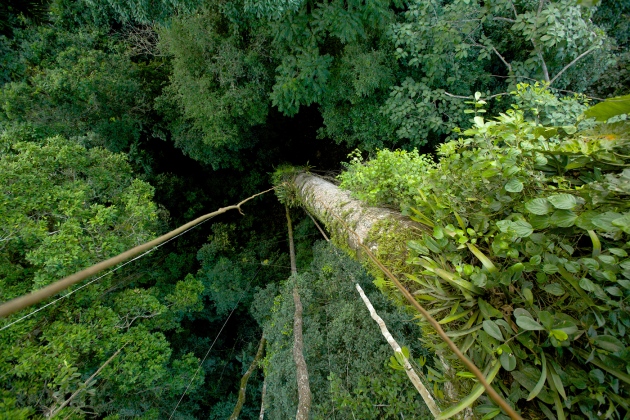 Tropical forests may emit more carbon than they absorb.

Every moment, the world’s roughly 3 trillion trees either suck up carbon dioxide from the air or release it into the atmosphere. Accurately quantifying these carbon flows is a long-standing challenge that has hindered scientists’ understanding of how forests help to regulate Earth’s climate. Now, researchers have combined ground and satellite measurements to conclude that tropical forests seem to be a net source of heat-trapping carbon emissions, rather than a carbon sink.

The team’s paper, published on 28 September in Science1, bolsters a growing consensus: that tropical forests are drying out or being cleared, burned and logged so fast that they now spew out a lot more carbon than they squirrel away.

Whereas earlier estimates based on measurements of atmospheric carbon flows suggested that tropical forests might be carbon neutral or even a net sink, more-recent studies — including ones based on data from NASA’s Orbiting Carbon Observatory-2 satellite — agree broadly with this recent paper, says David Schimel, an ecologist at NASA’s Jet Propulsion Laboratory (JPL) in Pasadena, California. He suspects that human activities such as starting fires and natural factors including droughts have dealt a severe blow to forests’ ability to store carbon.

The study authors estimate that the world’s tropical forests release approximately 425 million tonnes of carbon annually, equivalent to roughly 5% of the globe’s annual fossil-fuel emissions, and about five times more than an estimate in a highly cited 2011 paper2 that relied on ground-based forest inventories. Their work captures nuances in how droughts and other natural or human-caused disturbances could affect the amount of carbon that tropical forests exchange with the atmosphere.

The research team first travelled to forests throughout the tropics to measure tree diameters and heights. The scientists then fed those measurements into species-specific equations to estimate how much carbon the trees stored. Next, they used those estimates to ground-truth data collected by NASA’s Ice, Cloud, and Land Elevation Satellite (ICESat), a laser-equipped satellite that from 2003 to 2010 gathered data on forest height and vegetation layers around the globe.

Finally, the researchers used a machine-learning algorithm to translate measurements from the Moderate-Resolution Imaging Spectrometer (MODIS) instruments — part of NASA’s Terra and Aqua satellites that image Earth’s entire surface every one to two days — into data they could compare to the ICESat numbers. By extrapolating this comparison to MODIS images for the entire tropics, the team tracked how much carbon tropical forests gained and lost between 2003 and 2014.

The scientists quantified losses due to deforestation, degradation — including logging, firewood gathering and other human activities — and natural disturbances such as droughts. Because degradation and natural disturbances often leave forest canopies mostly intact, most previous satellite studies have failed to account for their impact on carbon emissions, says Alessandro Baccini, a remote-sensing scientist at the Woods Hole Research Center in Falmouth, Massachusetts, who led the work. Yet the researchers calculated that these processes accounted for more than two-thirds of forests’ carbon emissions. “We were surprised how much of the emissions were a result of degradation,” he says.

The study also tracks carbon captured by growing forests, which had been missing in previous analyses of satellite data, says Nancy Harris, a carbon scientist at the World Resources Institute in Washington DC. “This paper really helps to put carbon gains on the map.” In doing so, it moves scientists closer to being able to monitor countries’ progress toward forest-protection goals set under the 2015 Paris climate agreement, which requires accurate tracking of both carbon losses and carbon gains due to forest growth, she says.

Carbon estimates from satellite imagery should be viewed with caution, however, says Matthew Hansen, a geographer at the University of Maryland in College Park who produces satellite-based maps of changes in tree cover. MODIS and other optical sensors can be compromised by atmospheric interference, he says. And Hansen is concerned that the Woods Hole team reports large carbon losses in areas where forests have not disappeared, such as northern Brazil. “Geographically, there are some places that look suspect” in the team’s analysis, he says.

Moreover, MODIS cannot easily detect how much older forests are growing, potentially causing Baccini’s team to underestimate the carbon that these areas absorb, says Sassan Saatchi, a remote-sensing scientist at JPL. That could change when NASA’s Global Ecosystem Dynamics Investigation instrument launches to the International Space Station in 2018, Saatchi says. The instrument will measure forest height and vegetation layers using lasers that will capture far more data than those of ICESat, and should provide a more direct way to estimate tropical-forest carbon.