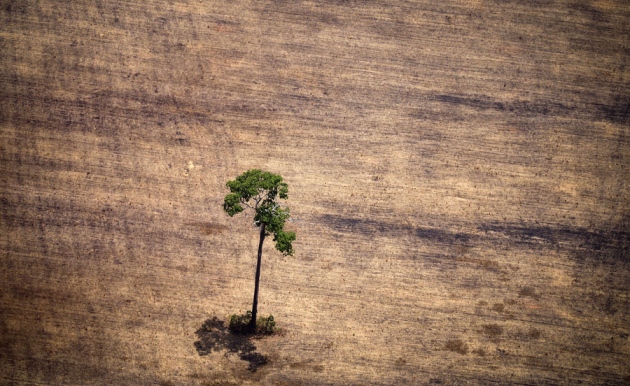 Forested land in the tropics is often cleared to create new fields for agriculture.

The rate of forest loss across much of the tropics increased by 62% in the first decade of the millennium compared to the 1990s, according to an analysis of satellite data.

The study, published in Geophysical Research Letters on 25 February1, examines conditions in 34 countries, including Brazil, Indonesia and the Democratic Republic of Congo. It contradicts 2010 findings by the Food and Agriculture Organization (FAO) of the United Nations suggesting that forest losses decreased by 25% from 1990-2010. Researchers attributed the discrepancy to differing survey methods, definitions and methodologies among countries that report to the FAO.

“This is a huge increase,” says lead author Do-Hyung Kim, a remote-sensing scientist at the University of Maryland in College Park. “But there is hope.”

Kim and his team analysed data from NASA's Landsat satellite programme for four years — 1990, 2000, 2005 and 2010 — and then calculated forest losses and gains during the 20-year span. Their data suggest that net forest losses, often due to the clearing of land for agriculture, increased sharply from 2000 to 2005 and then decreased by around 7% from 2005 to 2010.

Progress in the Amazon

“I agree with the overall story in this study,” says Matthew Hansen, a fellow remote-sensing scientist at the University of Maryland who was not involved in the research. Hansen led a more-detailed global analysis2 published in Science in 2013 covering annual forest losses and gains from 2000 to 2012.

Hansen notes that the current study relies on sparse data, but he gives his colleagues credit for carrying their analysis back to 1990. He adds that the study is yet another indication that the FAO assessments, which are typically based on reports from foresters, should not be treated as the baseline reference for policy-makers and climate scientists who are seeking to understand changes in forest cover.

“We are looking at the presence or absence of trees, and that’s not what they are reporting,” Hansen says.

The latest results confirm the progress that Brazil has made in protecting the Amazon basin, where deforestation has dropped by roughly 75% over the past decade. Kim says that Brazil's accomplishment accounted for the bulk of the decrease in forest loss from 2005 to 2010, and it underscores the potential of current forest-conservation efforts across the tropics.

“Policy-makers and conservation experts are moving in the right direction, but we need more effort,” Kim says.