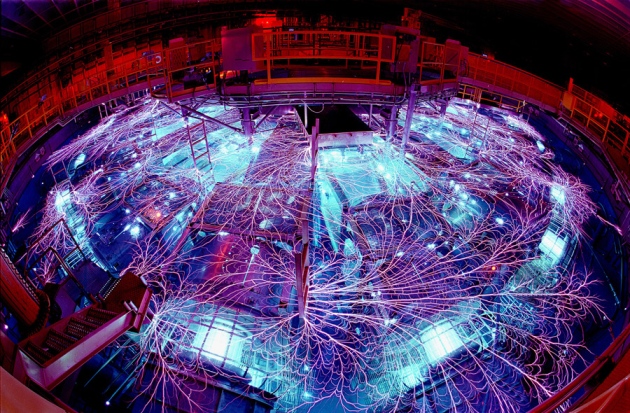 The intense electrical discharge of the Z machine at Sandia National Laboratories in New Mexico is used in attempts to trigger nuclear fusion.

The Z machine at Sandia National Laboratories in New Mexico discharges the most intense pulses of electrical current on Earth. Millions of amperes can be sent towards a metallic cylinder the size of a pencil eraser, inducing a magnetic field that creates a force — called a Z pinch — that crushes the cylinder in a fraction of a second.

Since 2012, scientists have used the Z pinch to implode cylinders filled with hydrogen isotopes in the hope of achieving the extreme temperatures and pressures needed for energy-generating nuclear fusion. Despite their efforts, they have never succeeded in reaching ignition — the point at which the energy gained from fusion is greater than the energy put in.

But after tacking on two more components, physicists think they are at last on the right path. Researchers working on Sandia’s Magnetized Liner Inertial Fusion (MagLIF) experiment added a secondary magnetic field to thermally insulate the hydrogen fuel, and a laser to preheat it (see ‘Feeling the pinch’). In late November, they tested the system for the first time, using 16 million amperes of current, a 10-tesla magnetic field and 2 kilojoules of energy from a green laser.

“We were excited by the results,” says Mark Herrmann, director of the Z machine and the pulsed-power science centre at Sandia. “We look at it as confirmation that it is working like we think it should.”

The experiment yielded about 1010 high-energy neutrons, a measure of the number of fusion reactions achieved. This is a record for MagLIF, although it stillfalls well short of ignition. Nevertheless, the test demonstrates the appeal of such pulsed-power approaches to fusion. “A substantial gain is more likely to be achieved at an early date with pulsed power,” says nuclear physicist David Hammer of Cornell University in Ithaca, New York, who co-wrote a 2013 US National Research Council assessment of approaches to fusion energy. 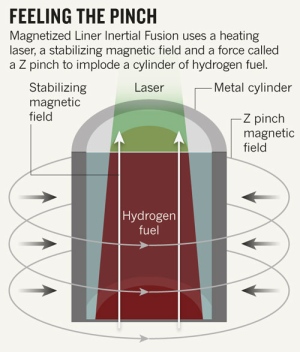 With its relatively slim US$5-million annual budget, MagLIF is a David next to two fusion Goliaths: the $3.5-billion National Ignition Facility (NIF) at Lawrence Livermore National Laboratory in California, and the €15-billion (US$20-billion) ITER experiment under construction in France. (Sandia has about $80 million to operate the Z machine each year, but it serves other experiments in addition to MagLIF.) The NIF squashes fuel capsules using nearly 2 megajoules of laser energy, and ITER will use 10,000 tonnes of superconducting magnets in a doughnut-shaped ‘tokamak’ to hold a plasma in place to coax self-sustaining fusion.

Both of the big projects have run into problems. After a concerted two-year effort, NIF fell well short of achieving ignition by a 2012 deadline. Its fusion yields have since increased markedly — nearly 1016 neutrons were created in a recent shot, Herrmann says — but the more than $300-million-a-year programme faces further budget cuts in 2014. Meanwhile, delays and budget overruns have become the norm at ITER. The facility is not expected to begin operations until 2027 — 11 years later than initially planned.

In addition to being cheaper, MagLIF seems to have technical advantages. The laser not only preheats the hydrogen fuel, but also makes it more conductive — and thereby more susceptible to the Z pinch. Furthermore, in a paper published late last year, MagLIF physicists showed evidence suggesting that the applied secondary magnetic field, as well as insulating the fuel, may have the happy side effect of stabilizing the cylinder as it implodes (T. J. Awe et al. Phys. Rev. Lett. 111, 235005; 2013). If so, that would cut down on hydrodynamic instabilities, which can disperse the energy and fuel before fusion can get going, says Stephen Slutz, a Sandia physicist who proposed the MagLIF system in 2009.

In the next few years, MagLIF scientists plan to turn up all three dials at their disposal. They can boost the Z machine to up to 27 million amperes; they can ramp up the magnetic field to as high as 30 tesla; and they plan to upgrade the laser to 8 kilojoules. They also aim to switch from fuel made of the hydrogen isotope deuterium to fuel containing both deuterium and another isotope, tritium — which should also lift yields. By 2015, they hope to achieve a yield of 1016 neutrons, or about 100 kilojoules — enough to show that ignition is within reach.

It could be crucial to make progress quickly. The US National Nuclear Security Administration, the division of the Department of Energy that funds the NIF, the Z machine and other laser fusion efforts, plans to deliver an assessment to Congress in 2015 about the future of these technologies. If MagLIF hits its 100-kilo­joule goal, it could bolster an argument for upgrading the Z machine to 60 million amperes or more, which simulations suggest would be sufficient to reach ignition.

“We’re all hoping that they will, in fact, find success with their early shots to justify the construction of a larger machine,” says Hammer.