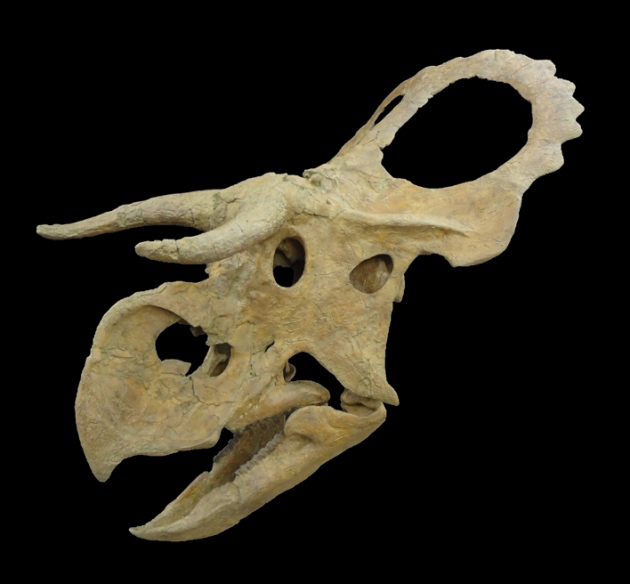 Fossil bones of a novel dinosaur (seen here in a reconstruction) suggest that unrelated lineages could coexist on different parts of what was then a large island.

It looks like a Triceratops, but it isn't one. With an enlarged nose and a pair of unusually long horns over its eyes, a dinosaur fossil discovered in Utah could help to answer a question that has long had palaeontologists scratching their heads.

The discovery of an almost complete skull and two front legs from a dinosaur body that would have been about five metres long is reported1 today in Proceedings of the Royal Society B by palaeontologist Scott Sampson, chief curator at the Denver Museum of Nature and Science in Colorado, and his colleagues.

The 76-million-year-old dinosaur, which the team has named Nasutoceratops titusi, was found in the Kaiparowits Formation. This group of rocks is in a region of the western United States that when the beast walked the Earth was part of a long, thin island called Laramidia, cut off from the rest of North America by a warm sea. Sampson says that many large ancient creatures on Laramidia were “provincial”: separated into similar but distinct species at the north and the south of the island. That is surprising because the comparatively few large land species that exist today — such as hippos and rhinos in Africa — tend to be spread across whole continents, without character differences.

There has been debate over whether fossils from Laramidia actually represent different species, or in fact are animals that lived at different times2. Yet Nasutoceratops belongs to a group that has a different common ancestor to all the other Triceratops-like fossils found in either north or south Laramidia. “This time, it’s not just the species that’s different; this animal is from an entirely different group of dinosaurs,” says Sampson.

What caused the different species to evolve remains unclear. Impassable mountains or rivers have both been suggested as reasons that populations became separated and evolved differently. However, such features are unlikely to have separated north and south Laramidia for long enough for that to happen.