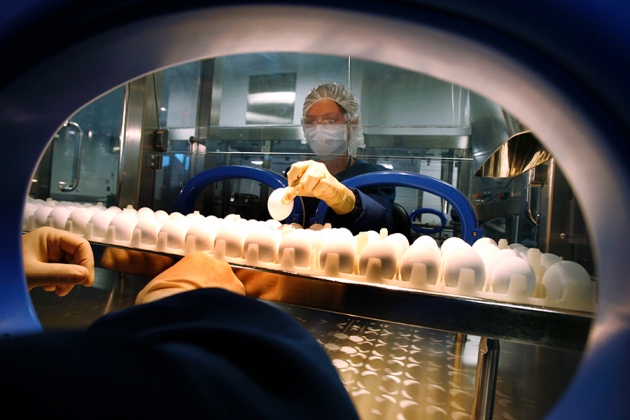 International rules to ensure that developing countries benefit when foreign companies make use of their biological resources could delay the supply of seasonal influenza vaccines or render those vaccines less effective, warn vaccine manufacturers and researchers.

The Nagoya Protocol dictates that any company using ‘genetic resources’ from a participating nation must negotiate an agreement to ensure that any profits or benefits are shared. That could include making payments or sharing research results or intellectual property. The treaty covers samples from plants, animals and, crucially, the viruses used to create vaccines.

The treaty came fully into force in October 2015. But there are concerns that the need to negotiate agreements may hamper companies’ ability to manufacture the best vaccines in time for the next flu season. The executive board of the World Health Organization (WHO) discussed the public-health impact of the treaty, including how it affects vaccines, at a meeting on 27 January. Pharmaceutical companies have raised concerns with the WHO and with governments.

International experts meet twice a year — in time for both Northern and Southern Hemisphere winters — to determine which viral strains should be included in the vaccines for the coming flu seasons. The process is conducted by the WHO’s Global Influenza Surveillance and Response System (GISRS), which collects and analyses the latest viral samples from around the world.

When the advice changes, “it’s a race against time” to incorporate the new strains into the vaccines, says John McCauley, director of the Crick Worldwide Influenza Centre in London, which is part of the GISRS. “It’s really, really time-pressured.”

Of the four virus strains in the current flu vaccine (2016–17), three pre-date the convention and one is from the United States, which has not ratified the treaty. But at some point, the recommendations could change to include samples that fall under the treaty.

Currently, 95 parties are bound by the Nagoya Protocol, including the European Union, China, India and Indonesia, and some countries, such as Brazil, have their own legislation that has a similar effect. The GISRS panel is due to meet in New York at the end of the month to determine recommendations for the Northern Hemisphere winter in 2017–18.

At present, companies have approximately six months to implement any recommended changes before the flu season starts (see ‘Race to make flu vaccine’). But the need to reach benefit-sharing agreements could introduce delays “conservatively estimated to be a minimum of three months”, says London-based AstraZeneca, which manufactures flu vaccines. This could mean that vaccines would not reach patients until influenza is already circulating. 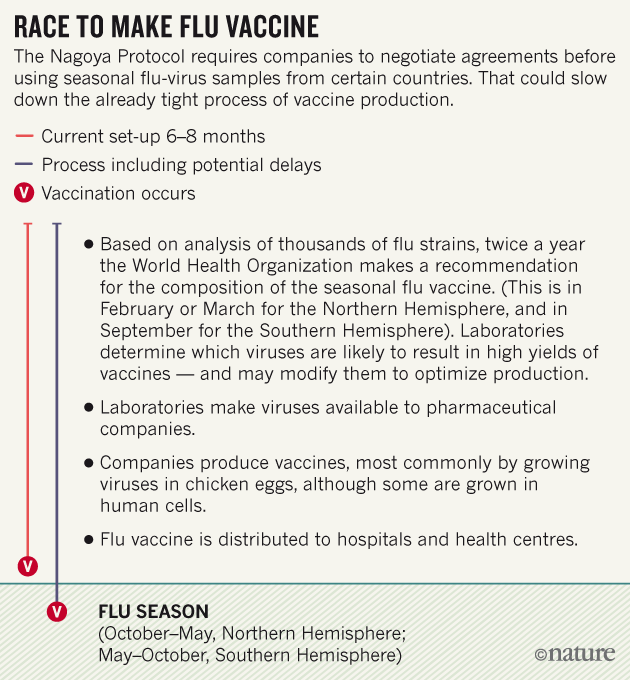 Such a delay “would place public health at significant risk”, the company says. “We would be concerned if Nagoya Protocol-related obligations caused delays or other problems in seasonal flu vaccines being made available for vaccination,” adds a spokesperson from GlaxoSmithKline in Brentford, UK.

Another possibility is that companies could simply avoid certain strains if the legality of their use is uncertain, says Stephen Inglis, who until last year headed the UK National Institute for Biological Standards and Control near London. This could mean that the resulting vaccine is a poor match for circulating strains.

Although Inglis thinks that the Nagoya Protocol “is based on a very noble principle”, he questions whether it should include pathogens. But Edward Hammond, who worked on the creation of a WHO sharing system for zoonotic flu samples known as the Pandemic Influenza Preparedness (PIP) Framework on behalf of the Third World Network, says that it is right that pathogens be included in the treaty — and that companies share the benefits of products made from them. Hammond, an independent research consultant in Austin, Texas, says that it should take only a few years to come up with a system for seasonal flu that does not require individual agreements but does include benefits-sharing — in the meantime, there will be just a “handful” of strains that come from treaty-bound nations.

One solution along these lines would be to turn the WHO–GISRS system into a formal international agreement that incorporates benefit sharing and is therefore recognized by the Nagoya Protocol: then, samples could be shared without making separate agreements. A similar option is being pursued for the PIP Framework in response to Nagoya. But McCauley notes that the system for seasonal influenza involves many more samples. “The necessary extra work under the PIP Framework,” he says, “would be very likely to reduce the number of viruses that are shared for seasonal influenza.”