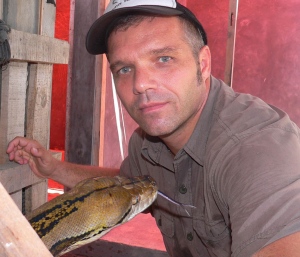 Mark Auliya wants the European Union to regulate the trade in amphibians.

Frogs are in trouble. In the 1990s researchers in Spain, Australia and Central America discovered that amphibians in rainforests and mountain lakes were dying in large numbers. The killer, it turned out, was chytridiomycosis, a disease caused by the fungus Batrachochytrium dendrobatidis (Bd), which has since been found around the world. Scientists have rushed to understand the disease, and have attempted different ways to mitigate its spread. But science alone is not sufficient. Mark Auliya, a herpetologist and trade-policy expert at the Helmholtz Centre for Environmental Research in Leipzig, Germany, says that policies have to change on an international level.

Auliya is part of the European Union (EU) project Risk Assessment of Chytridiomycosis to European Amphibian Biodiversity (RACE), in which teams of scientists are each looking at different aspects of the disease: genetics, physiological and behavioural effects, and geography. RACE will end in 2013 and Auliya is preparing to make a raft of policy recommendations based on the project. He spoke to Nature about the compelling need for new animal-trade legislation.

Why is the need to regulate amphibian trade so urgent?

Two or three years ago we had about 200 Bd-infected amphibian species and now we have more than 500. Bd is now distributed in more than 50 countries, on all continents that harbour amphibians. There are almost 7,000 amphibian species, but less than 3% are covered by the Convention on International Trade in Endangered Species of Wild Fauna and Flora (CITES). To control Bd in Europe there has to be a completely new EU-imposed comprehensive disease-control directive, which includes the regulation of all amphibian-trade activities across all entities that house or deal with amphibians. At this stage we cannot focus on specific species — we have to consider them all because potentially every amphibian species can have and spread the disease.

What is wrong with current legislation?

There is nothing legislating against Bd in particular. CITES came into effect in the mid 1970s, intended to ensure that species as a whole are not harmed by trade activities. But that didn’t mean by spreading disease. CITES has now officially recognized the spread of diseases through trade activities or through the movement of wildlife. However, it also recognizes that the convention is not the major player in this.

We have hundreds of pet shops across Europe; we have hundreds of exotic-wildlife and reptile fairs; the frog-leg trade is another problem. But we have a lack of enforcement of existing trade regulations, and there are loopholes freely used by the consumers.

What would new legislation entail?

We need standardized hygiene control. There must be something like an EU veterinary council imposing a single EU-wide hygiene and quarantine strategy to prevent spread of these diseases. We’re not looking at an improved law system, we’re looking at a completely revised law, which encompasses all these issues: trade, conservation of amphibian species and disease control. We also need harder sanctions on wildlife crime, which is still a trivial offence in most countries.

What can scientists, such as those involved in RACE, add to the debate?

The most striking result accomplished by the scientific community in the past year has been showing very clearly that global trade patterns have contributed to the spread of chytridiomycosis. We know that the global panzootic lineage of Bd has spread through trade activities1. We also know that there are species that carry the disease but don't necessarily die from it, such as the North American bullfrog (Rana catesbeiana), an invasive species that can adapt well to different habitats.

There is an upcoming opportunity: the EU’s animal-health strategy is set to be renewed in 2013. Emerging infectious diseases have been put on the agenda, and RACE scientists have a chance to inform how the strategy deals with that. This will probably include wild species, disease control and trade issues. This revised law should ideally impose amphibian-trade regulations among the different stakeholders: the pet industry, biomedical research, zoos and aquaria.

Is there any reason for optimism?

I want to be optimistic. A lot of amphibian species seem to be able to cope with the fungus if certain environmental conditions are maintained. And looking at strategies being evaluated at the EU level at the moment, I hope that new regulations can be implemented as soon as possible.