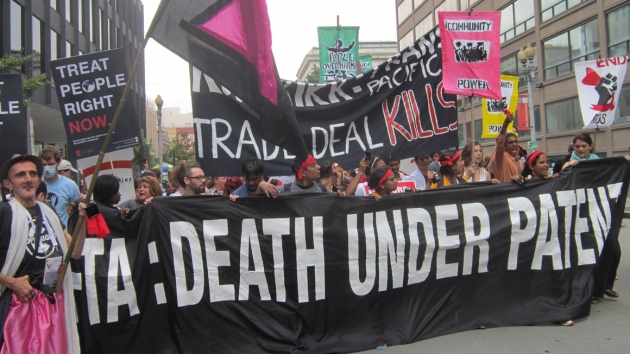 Trade rules that would raise the cost of HIV medicines come under fire at a July rally in Washington DC.

“Wanted,” the notice reads, in an American old-west style font, “Negotiating text of the Trans-Pacific Partnership Agreement.” The online advert invites visitors to contribute to a reward payable to the WikiLeaks website should it manage to expose the trade agreement. As Nature went to press, the reward stood at US$24,490.

The tactic, employed by the activist group Just Foreign Policy in Washington DC, may be extreme, but it reflects a broader unease over a negotiation process that the advert says “could affect the health and welfare of billions of people”. At issue are industry-friendly rules governing drug patents that could be written into the final text of the Trans-Pacific Partnership Agreement (TPP). The provisions could boost drug development and profits for the pharmaceutical industry, but also curb the use of cheaper generic medicines in low- and middle-income nations.

“In many parts of the world, access to generic drugs means the difference between life and death,” says US congressman Henry Waxman (Democrat, California). He is one of several US politicians voicing concern over the closed-door TPP negotiations and the influence that the pharmaceutical industry is thought to be exerting on the process through US trade representatives. With the latest round of talks set to begin on 6 September in Leesburg, Virginia, public-health advocates are expressing fears that the outcome will reduce access to medicines.

Besides the United States, ten Pacific countries representing 34% of US trade have so far agreed to join the TPP — Australia, New Zealand, Singapore, Malaysia, Brunei, Vietnam, Peru, Chile, Canada and Mexico. The agreement, which could come into effect as early as next year, spans several trade areas, meaning that some countries may be tempted to forgo access to generic drugs in exchange for better access to US markets in other industries.

According to previously leaked documents, the TPP looks likely to strengthen patent protection for drugs more than any trade agreement so far. Whereas the current World Trade Organization (WTO) agreement sets a minimum 20-year period for patents around the world, the TPP would follow US practice in extending patents beyond 20 years when the drug-approval process has delayed a drug’s market entrance. Partner countries would also be pressed to award new patents for off-patent drugs that have been formulated in a new way or approved for a new set of patients.

This practice restricts access to medicines in poor countries because it extends patent monopolies. For example, according to Médecins Sans Frontières (also known as Doctors Without Borders) in Geneva, Switzerland, countries that have rejected patents on new formulations of the off-patent HIV drug Abacavir now sell generic versions for as little as $139 per person per year, whereas in Malaysia paediatric Abacavir costs $1,200 per child per year, because the country granted the new formulation a patent. But a spokesperson from the Office of the US Trade Representative says that patenting new formulations of old drugs provides an incentive for drug companies to develop adaptations “that are valued in developing countries, like heat-stabilized medicines for places without refrigeration”.

Industry stakeholders say that drug companies need greater protection as the industry enters an unprecedented period of patent expirations (see Nature 480, 16–17; 2011) and faces stiff competition from generics produced in India and China. They argue that sales of generics need to be restricted if companies are to recoup the millions they invest in developing new drugs. “If TPP countries wish to be those in which innovation flourishes, they should have strong intellectual property,” says Stephen Ezell, senior analyst at the Information Technology and Innovation Foundation, a non-profit think tank in Washington DC that supports patent extensions.

The negotiators are considering special protections for biologic drugs — those based on large biological molecules. One possibility under discussion would grant companies a 12-year period of exclusivity on clinical-trial data related to the biologics they develop. Makers of equivalents of small-molecule drugs rely on such data when they seek government approval for their products. Without access to the data, the generics company would have to repeat the costly clinical trials or delay the time-consuming approval process for its product by 12 years. Charlene Barshefsky, a former US trade representative who now advises companies on trade law, explains that the biologics market, which was worth US$149 billion globally in 2010, needs extra protection because biologics cost more to develop than small-molecule drugs. “I am not saying that a foreign innovator cannot develop their own biologic drug, they just need to do their own homework,” she says.

More generally, stronger patent provisions would harm small, domestic manufacturers of generic drugs in Malaysia and Vietnam, says Shawn Brown, formerly vice-president for international affairs and state government at the Generic Pharmaceutical Association based in Washington DC. They would also cut sales for larger generics manufacturers in the United States, Australia and Canada that supply low-cost drugs to the world.

Some countries whose governments purchase drugs with a set budget are also alarmed by signs that the TPP may grant new negotiating powers to the industry. In New Zealand, for example, a government agency called Pharmac determines whether the benefits of a new drug warrant the cost, or if the country is better off sticking with a cheaper alternative. A leaked TPP provision would empower drug companies to appeal such decisions. “We have good processes for ensuring what is for the good of our population, not for the good of lobby groups, and I don’t see why they need to interfere with that,” says Marilyn Head, a policy analyst at the New Zealand Nurses Organisation in Wellington, who adds: “Bugger off, quite frankly.”