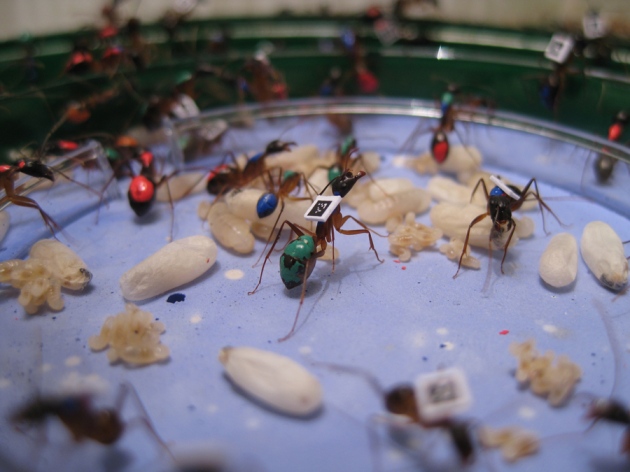 Computer tracking of tagged ants demonstrated that workers divided into three specialized groups — but often switched groups as they aged.

Because all the workers in an ant colony look the same, tracking their movements and interactions by eye is fiendishly difficult. Instead, Danielle Mersch and her colleagues tagged every single worker in entire colonies and used a computer to track them, accumulating what they say is the largest-ever data set on ant interactions.

The biologists, based at the University of Lausanne in Switzerland, have found that the workers fall into three social groups that perform different roles: nursing the queen and young; cleaning the colony; and foraging for food. The different groups move around different parts of the nest, and the insects tend to graduate from one group to another as they age, the researchers write in a paper published today in Science1.

“The paper is a game-changer, in the size and detail of the data set that was collected,” says Anna Dornhaus, an entomologist at the University of Arizona in Tucson. “Different methods of automatically tracking animal behaviour have recently been developed, and this is one of the first empirical studies that have come out as a result.”

The team reared six colonies of carpenter ants (Camponotus fellah) in the lab and tagged each worker with paper containing a unique barcode-like symbol. The colonies — each comprising more than 100 ants — lived in flat enclosures filmed by overhead cameras. A computer automatically recognized the tags and recorded each individual’s position twice per second (see video below). Over 41 days, the researchers collected more than 2.4 billion readings and documented 9.4 million interactions between the workers.

The researchers found that around 40% of the workers were nurses, which almost always stayed with the queen and her brood. Another 30% were foragers, which gathered most of the colony’s food and were found near the entrance to the nest. The rest were cleaners, and these were more likely to visit the colony’s rubbish heaps.

The workers move between jobs as they get older — nurses are generally younger than cleaners, which are younger than foragers. Honeybees go through similar transitions from young nurses to older foragers, but this study provides the clearest evidence yet that ants do the same.

Nevertheless, these career changes were not clear-cut. “You can find very old nurses and very young foragers,” says Mersch.

By creating heat maps to represent the workers’ positions, Mersch's team showed that nurses and foragers stick to their own company and seldom mix, even if the colony’s entrance and brood chamber are close together. Cleaners are more widely dispersed, patrolling the whole colony and interacting with both of the other groups. “The ants can probably be in any place within their enclosures in less than a minute,” says Mersch, “but even in these simple spaces, they organize into these spatial groups.”

This organization probably has far-reaching effects. For example, returning foragers could more efficiently communicate the location of food to other foragers without bothering the entire colony. Similarly, by sticking together, they could keep parasites or diseases between themselves without endangering the valuable queen and brood.

Mersch now plans to test these ideas, as well as try to understand why the ants move from one job to another. “With all the data we have on activity and spatial structure,” she wonders, “can we actually determine which ants will do which tasks in the future, based on their current state?”

James Traniello, a behavioural biologist at Boston University in Massachusetts, calls the analysis “extraordinary and sophisticated”, but wonders how the study’s patterns would differ in other ant species, or in more natural conditions in which older workers die as they forage outside the nest. However, the same tracking techniques could be used to address these questions, he says, adding that he hopes they will be broadly adopted.

Each colored line represents the trajectory of an ant in the preceding minute. (Ants without visible lines did not move.) The frame rate is accelerated five times.
DANIELLE MERSCH AND ALESSANDRO CRESPI