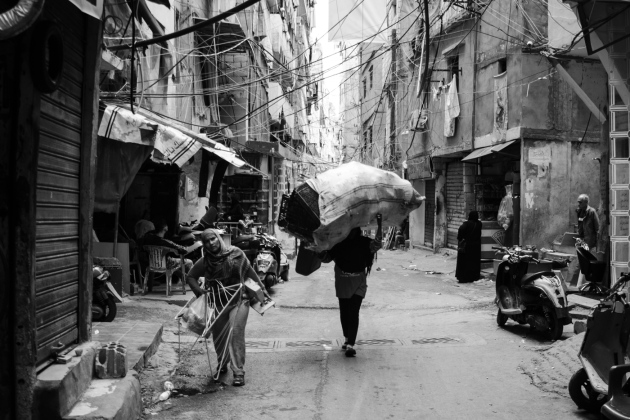 In southern Beirut, a temporary shelter has become a permanent home. The Shatila refugee camp was established to house displaced Palestinians in 1949 and now has thousands of families within its walls. Residents have learnt to contend with overcrowding, pollution — and a steady stream of well-funded foreign researchers who come to study them.

Drawn by its unusual story and convenient position close to the airport, researchers flock to Shatila to track the effects of prolonged refugee status and cultural isolation on the community. Well-meaning researchers are so common in Shatila that locals have learnt how to spot them.

Before she became a social anthropologist at King’s College London, Mayssoun Sukarieh did voluntary work in Shatila. Residents who saw her reach for her notebook would ask if she was a social researcher: “They come for a tiny bit, and then they leave,” the locals explained.

Sukarieh realized that scholars’ repeated visits were affecting the community. Academics were among the few contacts that people in Shatila had with the wider world. Again and again, the outsiders would fly out with what they wanted and offer little or nothing in return. The community started to view the visitors with amusement, then resentment.

Some people in Shatila, Sukarieh feared, were being ‘over-researched’ — an anecdotal concern that social scientists and biomedical researchers increasingly encounter at ‘high-traffic’ research sites around the world. Sometimes, it is a point raised by ethical-review committees. Occasionally, the community under study makes its own frustrations heard loud and clear.

How big is the problem? Ironically, the issue of over-research has not been researched much. In a study published last month, scientists in South Africa analysed concerns about over-research at two sites of HIV-prevention studies (J. Koen, D. Wassenaar and N. Mamotte Soc. Sci. Med. 194, 1–9; 2017).

They found that the term ‘over-research’ is poorly defined and encompasses a range of concerns. For example, some use it to describe how other communities are being neglected in favour of one with a pre-established research structure or proximity to a university. This can lead to skewed data, and misconceptions about a particular phenomenon or place.

Alternatively, the term could be used to describe a local community that bears the burden of research participation without sufficient reward, creating a sense of frustration that leads to dwindling participation. In biomedical studies, researchers sometimes worry that involvement in multiple clinical trials — and exposure to multiple medications — can increase the risk to participants  and cloud results.

Repeated studies can certainly exaggerate the frustration that local people feel when their cooperation produces only data, publications and further research. In the South African study, many locals argued that the research should be more closely linked to developing their communities. Some projects, including certain grants from UNAIDS, a global United Nations effort to tackle HIV/AIDS, do require researchers to invest in infrastructure and education. More funders should look at this model. However, several HIV-prevention studies have done such a good job that their results are inconclusive: too few participants contracted the disease for the data to be statistically meaningful.

It is crucial that efforts to reward research participation are developed in consultation with the community being studied. Sukarieh describes well-intentioned educational courses aimed at Shatila-research participants that were impractically long — one consisted of 20 hourly sessions — and discussed issues irrelevant to the people’s needs.

Over-research can bring benefits, though: a heavily studied community can become savvy in making its needs known to researchers and in influencing how a study is done. In Hackney, an ethnically diverse borough of London that underwent a period of rapid gentrification, a sociologist who came to study participants in a creative-writing group, for example, was told that, to do so, she had to join the group and write pieces like everyone else. The researcher reported how this strengthened her involvement and built stronger links to the community that helped the project to succeed (S. Neal et al. Qual. Res. 16, 491–507; 2016).

Forging deep links with a community takes time, and time requires funding. Funders should recognize the need to build resources for such efforts into their grants; institutions should recognize and reward this time and effort, and acknowledge that it can eat into a researcher’s publication record. It is not good enough to come in for a tiny bit, and then leave.