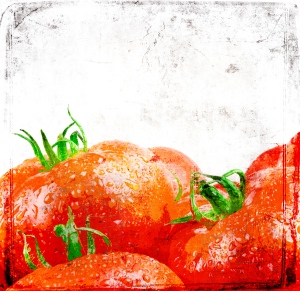 Tomatos have twice triplicated their genome in the past hundred million years.

The genome sequence of one of the world’s highest-value salad plants — the tomato — has been decoded by an international team of scientists, and is published today in Nature1 .

The tomato (Solanum lycopersicum) is an increasingly popular fruit, with 145.8 million tonnes produced globally in 2010.

According to the leaders of the UK arm of the Tomato Genome Consortium, Graham Seymour at the University of Nottingham and Gerard Bishop, formerly of Imperial College London, the sequence will make precision breeding possible not just in tomatoes, but also in other crop species from the Solanaceae family, such as aubergines (Solanum melongena) and peppers (Capsicum spp.).

They also hope it will help in the development of tomatoes that can survive pests, pathogens and even climate change, as well as high-yield crops that still have a good flavour. “It’s really all about making a better tomato,” says Allen Van Deynze, a molecular geneticist at the Seed Biotechnology Center at the University of California, Davis. “This work enables a lot of things we just couldn’t do before.”

Launched in 2003, the project has taken some time to get results, but it has produced an “amazingly complete” sequence, the leaders say. With more than 80% of the genome sequenced, and more than 90% of the genes within it identified, and refinements still taking place, the group hopes to make this a gold-standard reference sequence. "It's one of the better genomes out there," says Van Deynze.

Giovanni Giuliano, from the Italian National Agency for New Technologies, Energy and Sustainable Economic Development in Rome, and a lead researcher on the project, explains that the group started out using traditional tools to sequence the genomes of the domesticated tomato cultivar Heinz 1706 (the one used to make the famous ketchup) and its closest wild relative, Solanum pimpinellifolium.

However, when the data still had major holes by 2008, the team took advantage of ‘next-generation’ technologies and switched to the much faster method of whole-genome shotgun sequencing. In this technique, large chunks of DNA are sequenced separately, pieced back together, then assembled into the genome.

Giuliano says that one of the most exciting discoveries was that the entire tomato genome was copied in triplicate on two separate occasions. The earlier event occurred about 130 million years ago, and was first identified in grapes (Vitis vinifera)2, but what interests Giuliano is that a second event occurred around 60 million years ago, and had major implications for the development of the fruit.

“Several of the genes ‘born’ at that second triplication stayed in the genome for tens of millions of years,” he says. “Then, relatively recently, they changed their function — this brought about the appearance of the fleshy fruit as we know it today.” The tomato is already an established model for fleshy fruit development, so the information will also be useful for breeding fruits such as strawberries, melons and bananas.

“The next thing,” says Johnathan Napier, a plant biotechnologist at Rothamsted Research in Harpenden, UK, “is to link this genome sequence to traits that are useful and important, especially for food security and human health.”