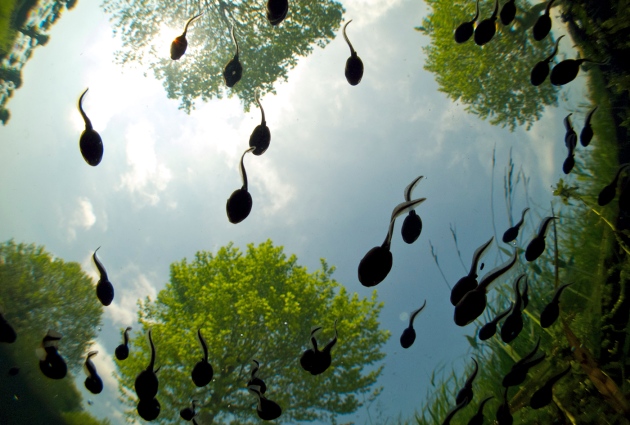 These common-toad tadpoles produce a potent toxin that affects the heart.

Many tadpoles ward off predators with potent poisons — but those toxins also seem to help win battles with their own kind, a new study finds.

Tadpoles of common toads (Bufo bufo) are more poisonous when raised in crowded conditions, which may give them a competitive edge, according to the work published on 23 September in Functional Ecology1.

Many noxious plant species are known to modulate their defences to fend off different threats2, but it is less clear whether animals possess similar toxin-tuning abilities. Although predation pressure is known to induce tadpole chemical defences3, the new findings are the first unequivocal evidence of toxin synthesis spurred by competition in vertebrate animals.

Being poisonous can make a species essentially inedible to predators, but making potent toxins comes at a metabolic cost — so it’s best to make that investment count. “It would be very profitable for such animals to kill two birds with one stone by using their anti-predatory toxins as chemical weapons against their competitors, too,” says the study’s lead author, Veronika Bókony, an ecologist with the Hungarian Academy of Sciences in Budapest.

Common toads are equipped with bufadienolides, potent toxins that cause harm by accelerating and disrupting the heart’s rhythms4. Field studies have found that common toad toxicity varies geographically, with the intensity of competition being the most reliable predictor5. But it has been unclear whether such patterns occur because populations are genetically isolated from one another in different ponds, or whether they reflect defences induced by environmental factors.

Bókony and her colleagues took this question to the laboratory, rearing toads in artificial ponds with varying numbers of individuals — a proxy for the strength of competition. The species composition of the ponds also varied; some contained common toads, others contained agile frogs (Rana dalmatina) and some contained a mix. Agile frogs hatch earlier and grow to larger sizes than common toads, so they were considered to represent tougher competition. Because the frogs are non-toxic, the researchers wanted to see whether the toads’ toxins are especially aimed at these intense rivals (a phenomenon called allelopathy).

The more competitors the toads were raised with — of either species — the smaller and more toxic they were, echoing the field results. But surprisingly, toad tadpoles defended themselves against their own kind more fiercely, by producing more toxins than they did against the frogs. Meanwhile, the frogs didn’t seem to be bothered by their toxic tankmates.

The study is “very well designed”, says Thomas Hossie, an ecologist at Trent University in Peterborough, Canada. The plasticity of other tadpole traits, including morphology and behaviour, is well documented, he notes, but most studies examine the response to predation risk. “This paper is another great example of how amazingly plastic larval amphibian traits really are.”

Gary Bucciarelli, an ecologist at the University of California, Los Angeles, also praises the work: “I think the researchers present a very compelling study that questions the evolution and ecological role of amphibian chemical defences.” His own research has shown that newts become more toxic in response to stressful conditions6. Such findings “really begin to scrutinize the idea that predation alone drives variation in animal chemical defences”, he adds.

Toxicity that varies by the density of an organism’s population has also been observed in insects7, notes Hossie: “This experiment indicates that it may be more widespread than we anticipated.”

Bókony and her colleagues aren’t done with the toads yet, as the unexpected lack of harm to the competitor frogs “begs the question what exactly [the toads] are defending themselves from”. Cannibalism is certainly a possibility, as tadpoles of many species are known to turn on their own when times are tough.

But Bókony wonders whether the toxins might serve a different function altogether. She hypothesizes they may “provide a sort of immune defence against contagious diseases they could catch from [fellow tadpoles], especially when crowded”. She and her colleagues hope to explore this possibility next.