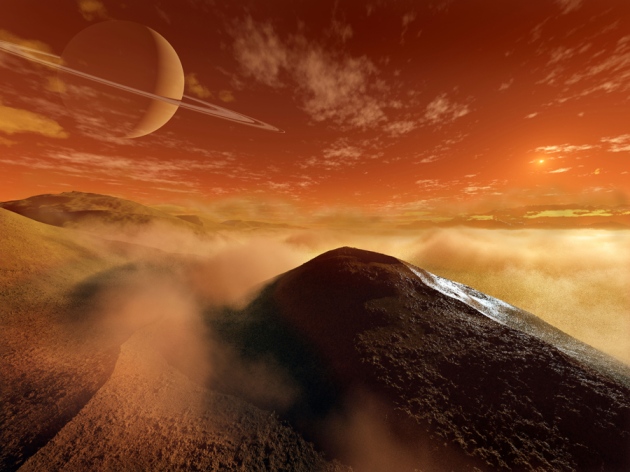 Wind patterns have imprinted a record of the changing climate on the hydrocarbon dunes of Titan.

Long sand dunes that ripple across Saturn’s moon Titan may have been there for thousands of years, results from NASA’s Cassini spacecraft suggest.

Radar images of the dunes — the most detailed ever taken — reveal that the winds that rearrange the sand probably change direction as Titan's orbit wobbles relative to the Sun. Those orbital variations are thought to alter which parts of the surface get the most sunlight, and the shape of the dunes reflect the resulting changes in weather patterns.

It may take as long as 3,000 Saturn years, or 90,000 Earth years, for a single dune to change direction, says Ryan Ewing, a geologist at Texas A&M University in College Station, who led the work.

The discovery appears on 8 December in Nature Geoscience1.

Some large dunes on Earth, such as those in the western Sahara Desert, also preserve a memory of past climate change. Winds were stronger during the last Ice Age, when Earth’s wobbling orbit allowed glaciers to advance towards the subtropics and altered weather patterns there. The largest dunes formed during that time have not changed orientation in the intervening 11,000 years. 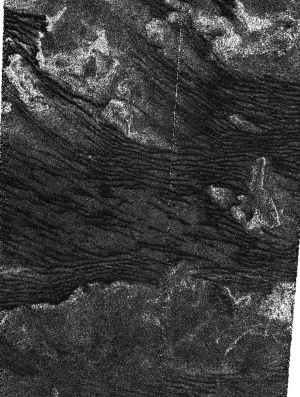 Radar mapping by the Cassini probe shows small, star-shaped dunes next to long ones.

Scientists have had a harder time pinning down the factors that shape Titan’s dunes. These are made of hydrocarbon particles — so they are more similar to mounds of soot than to Earth's sand, which is mostly silica — and are some of the biggest in the Solar System. They stretch for hundreds of kilometres over a total area as big as the United States (including Alaska). Various ideas for what shaped them include winds from the east or the west, which may be driven by daily, seasonal or other regular changes. Dunes can even assume different forms depending on how much sediment is available to feed them2.

Ewing’s team analysed about 10,000 dune crest lines mapped by a radar instrument aboard Cassini, which has been orbiting Saturn since 2004. They used an algorithm that enabled them to extract finer detail from the images than ever before. This sharper view allowed them to see features down to about 1 kilometre across — including, for the first time, star-shaped dunes where three or more crest lines intersect.

The team then calculated that it would have taken several thousand years for the winds to change direction, so that they would stop forming the linear dunes and start making the star-shaped ones instead. “The timescale on that has to be long compared to what we traditionally think of as seasonal or daily winds,” says Ewing.

Knowing that the dunes are shaped on such long timescales means that scientists can start looking further back in time, says Ralph Lorenz, a planetary scientist at the Johns Hopkins University Applied Physics Laboratory in Laurel, Maryland. “This work opens dune morphology as a window into palaeoclimate studies on Titan,” he says.

Ewing and his colleagues are now using global climate models similar to those developed to study the Earth's climate to understand how shifting orbital patterns may have changed Titan’s winds.

One relevant clue may come from a Nature paper also published on 8 December3. In it, a team led by planetary scientist Devon Burr of the University of Tennessee, Knoxville, describes experiments in a wind tunnel simulating Titan's conditions of low gravity and thick atmosphere. The scientists found that it took higher wind speeds than expected to give sand enough of a bump to start moving.

“If moving the sand requires a stronger wind on Titan,” Ewing says, “then maybe we need to be looking for that stronger wind over these orbital-cycle timescales.”