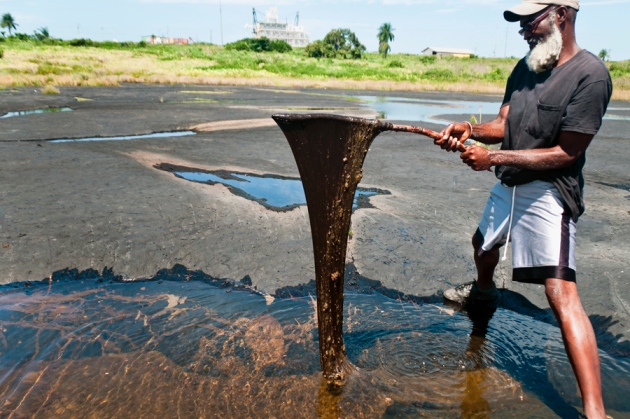 Minuscule water droplets suspended in tar pits are teeming with diverse ecosystems of bacteria and methane-producing organisms that could be harnessed to help break down oil spills.

An analysis of Pitch Lake, a tar pit in La Brea, Trinidad and Tobago, reveals just how little water is needed to support organisms that can inhabit — and consume — oil. The finding, reported today in Science1, also suggests a wider range of possible habitats for life on other worlds.

Droplets found in Pitch Lake tar were just a few microlitres in volume, or roughly one-twentieth the size of a drop of water. When researchers sequenced DNA extracted from a dozen of the droplets, they found a menagerie of bacteria and methane-making archaea, a kind of single-cell organism. The chemical compositions of the microdroplets were distinct from control samples of lake oil mixed with distilled water, indicating that the organisms were actively eating and processing the oil.

The team had expected such life to exist only at the bottom of the tar pit, where the layer of oil mixes with groundwater. Instead, the researchers suggest, minuscule oil-consuming biospheres could be scattered in water droplets throughout the tar.

Julia Foght, a petroleum microbiologist at the University of Alberta in Edmonton, Canada, has observed similar organisms in samples from Canada’s oil sands. But those samples come from wells which have been injected with water during the drilling process, contaminating naturally occurring water-droplet ecosystems. “It’s hard to get a sample of uncompromised oil,” says Foght. “The advantage of this study is that they can collect it at the surface and look at it.”

The findings imply a possible strategy for oil companies to reduce biodegradation of oil reservoirs, which produces a hard-to-extract residue called heavy oil. “If you want to prevent it, you should try to prevent the formation of these microdroplets,” says Gerrit Voordouw, a petroleum microbiologist at the University of Calgary in Canada.

The microdroplets might also be harnessed to help clean up oil spills. They may occur naturally at sandy underground sites where pipelines have burst, says Jared Trost, a hydrologist with the US Geological Survey in Mounds View, Minnesota. He and his colleagues have been studying such a spill in Bemidji, Minnesota, where they may now search for them.

Others are looking even farther afield. Study co-author Dirk Schulze-Makuch, an astrobiologist at Washington State University in Pullman, says that conditions in Earth's tar pits may be similar to those beneath the hydrocarbon lakes on Saturn's moon Titan, where methane and ethane could mix with groundwater. These regions on Titan, and similar areas on other worlds, could be more hospitable to life than scientists had suspected, he says.