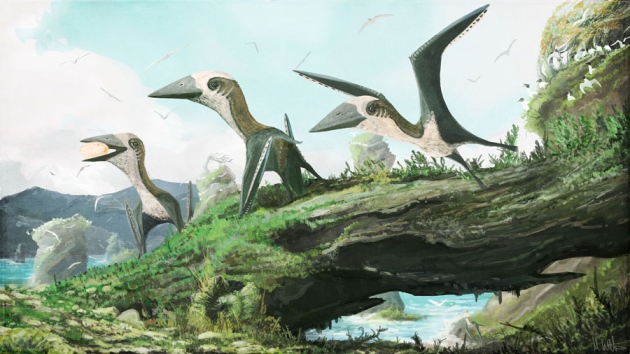 Pterosaur bones found in western Canada came from a specimen with a wingspan of just 1.5 metres.

When dinosaurs roamed Earth, pterosaurs ruled the skies. The largest of these ancient reptiles had wingspans of 10 metres or more. But fossil fragments unearthed in western Canada suggest that these giant flying reptiles co-existed with a more diminutive form — closer to the size of an albatross.

The finding is preliminary, but if it holds, it could upend scientists’ view of pterosaurs’ evolution, and their eventual extinction 66 million years ago.

The fossils — an upper arm bone and vertebrae discovered on Hornby Island in British Columbia — came from a nearly full grown pterosaur that had a wingspan of just 1.5 metres and was about as tall as a housecat, scientists report on 31 August in Royal Society Open Science1. They suggest the existence of a species about 77 million years ago, during the late Cretaceous period, that was much smaller than the giant pterosaurs thought to dominate then.

“It’s quite different from other animals we’ve studied. There hasn’t really been evidence before of small pterosaurs at this time period,” says Elizabeth Martin-Silverstone, the study’s lead author and a palaeobiologist at the University of Southampton, UK.

She and her colleagues examined a thin slice of the arm bone — a humerus — and analysed it on a microscopic level, looking at how the bone had maintained and reworked itself to get an idea of the animal’s growth stage. They also found that the vertebrae were beginning to fuse together. Together, these demonstrated that it was nearly a full-grown adult when it died. 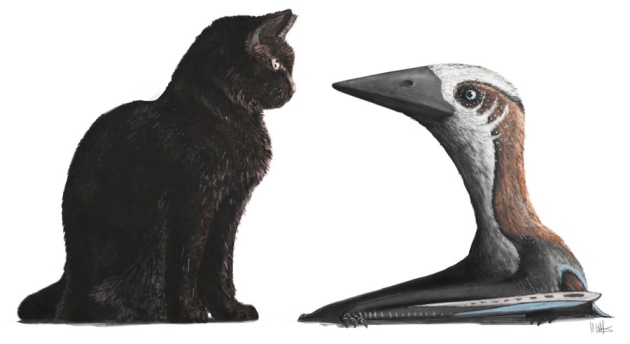 The pterosaur was about the size of a housecat.

Pterosaurs’ bones were hollow, with thin walls, so relatively few have survived as fossils. And small pterosaurs are particularly tough to identify, which means that the fossils that have been found give a limited picture of the original diversity of the animals. But in recent years, scientists have discovered specimens that suggest pterosaurs grew larger as they evolved. The biggest yet known was the size of a small plane — and lived during the late Cretaceous period; the smallest thought to be living then had wingspans of roughly 2.5 metres.

The latest study relies on only a few bones, so it does not provide definitive proof that small pterosaur species existed alongside the larger ones, says Alexander Kellner, a palaeontologist at the National Museum of Brazil in Rio de Janeiro.

“I praise the authors for their efforts, but the specimen is not very complete,” he says. “If they had a skull, jaw or neck bones, that would help. The classification? I don’t know. It could be anything.”

Study co-author Mark Witton, a palaeontologist at the University of Portsmouth, UK, acknowledges the work’s limitations. “We’ve only got one data point, so don’t rewrite the textbooks yet,” he says.

But he and his colleagues say that they carefully ruled out alternative explanations for the small size of the fossilized bones. The fused backbone means that the bones did not come from a bird. And it could not be a nyctosaur, a previously known small marine pterosaur, because the arm bone lacked that creature’s distinctive hatchet-shaped crest, where the flight muscles attach, says Martin-Silverstone.

The Cretaceous ended 66 million years ago with a mass extinction that saw pterosaurs vanish alongside the dinosaurs.

In general, the extinction wiped out bigger species, while smaller animals like many birds managed to muddle through and survive. If the latest finding is confirmed, it will turn out that birds were not the only small-winged vertebrates living then, although the tiny pterosaur’s unfortunate fate would imply that being little was no guarantee of survival.

“They have plenty of new material to determine that this is a new species of pterosaur,” says Michael Habib, a palaeontologist at the University of Southern California in Los Angeles. “If there’s one, there were probably others. Then we’d need to rethink what we previously thought about survivability of these little ones.”