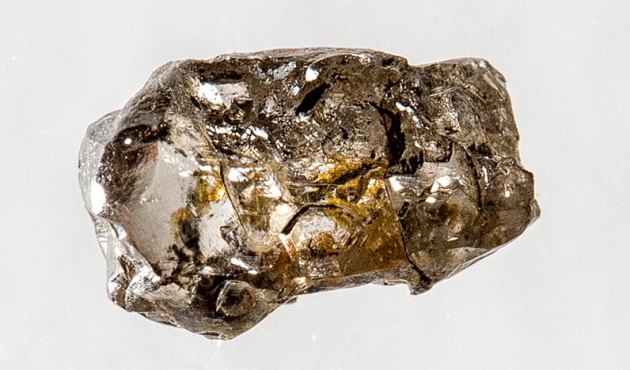 Just 5 millimetres long, this diamond formed in the deep mantle and carries an enclosure of ringwoodite, a mineral never before found in a terrestrial rock.

A microscopic crystal of a mineral never before seen in a terrestrial rock holds clues to the presence of vast quantities of water deep in Earth’s mantle, scientists report in a paper published today in Nature1. The discovery came from a diamond weighing less than one-tenth of a gram, found in Brazil. Further studies of the sample could help to answer the long-standing question of the origin of the planet's water.

Most diamonds form at depths of about 150 to 200 kilometres, but 'ultradeep' diamonds come from a region of the mantle known as the transition zone, 410 to 660 kilometres below the surface, says Graham Pearson, a mantle geochemist at the University of Alberta in Edmonton and the lead author of the study.

Impurities in ultradeep diamonds can be used as probes to study the regions in which the stones formed — and in particular to understand what minerals are present at those depths. Certain minerals have crystal structures that can form only at high pressures or temperatures, or both, and many rearrange themselves into different structures when the pressure is taken off or the temperature goes down. Thus, when the churning of the mantle brings rock towards the surface, some of the minerals that formed at great depths can no longer be found. But if the minerals are trapped inside diamonds, they stay compressed in their original forms. “These high-pressure diamonds give you a window into the deep Earth,” says Pearson. 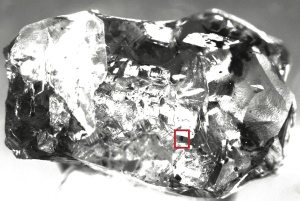 The red square highlights the ringwoodite inclusion in the rock.

He and his team studied one such diamond, which weighed 0.09 grams and came from the Juína district in Brazil. As they examined impurities in it using a light-scattering method known as Raman spectroscopy, they came across something unusual: a grain 40 micrometres across that turned out to be ringwoodite — a high-pressure form of olivine, a mineral that makes up much of the upper mantle. Ringwoodite had previously been found only in meteorites or synthesized in the lab.

Mineralogical theory and seismic findings had long suggested that ringwoodite is a major component of the transition zone, and the finding backs that up. “It confirms that our ideas of how the mantle is constructed are correct,” says Hans Keppler, a geophysicist at the University of Bayreuth in Germany, who wrote about the find in an accompanying News & Views2.

Unlike better-studied forms of olivine, ringwoodite can hold a substantial amount of water. The sample therefore had the potential to help resolve a long-standing controversy over just how much water the transition zone contains. Using infrared spectroscopy, Pearson’s team found that its tiny fleck of ringwoodite contained about 1% water by weight. “That may not sound like much,” Pearson says, “but when you realize how much ringwoodite there is, the transition zone could hold as much water as all the Earth’s oceans put together.”

But the water content of a single crystal is not necessarily representative of the entire zone, says Norm Sleep, a geophysicist at Stanford University in California. Diamonds are produced by an unusual type of volcanism that is normally associated with water-rich rock, he says. He compares the situation to that of someone panning for gold and finding a large nugget: “It would be unwise to assume that all the gravel in the stream is gold nuggets.”

Pearson agrees. Remote-sensing studies of the mantle have produced conflicting results, suggesting that the water content of the transition zone may be “spotty”, he says. “Our sample appears to come from one of the wet spots.”

Where it all began

There are two theories as to where the mantle's water came from. One is that it was ocean water that was carried deep underground when sea-floor rocks were subducted by plate tectonics. The other is that deeper layers of the Earth still contain water that was part of the materials that formed the Earth.

If the water has been there since Earth formed, its ratio of deuterium to normal hydrogen could be different from that found in sea water today — and closer to the composition of the Earth’s primordial water. If so, that ratio could provide clues as to whether the water came from asteroids or from comets, says Humberto Campins, an asteroid researcher at the University of Central Florida in Orlando.

Pearson sees a value to checking the isotope ratio, but so far his group has been unwilling to do such destructive tests on the only known piece of mantle ringwoodite. “We have to think really carefully on what we do next on this sample because it’s very small: 40 micrometres,” he says. “That means you can only think of doing one or two additional analyses.”