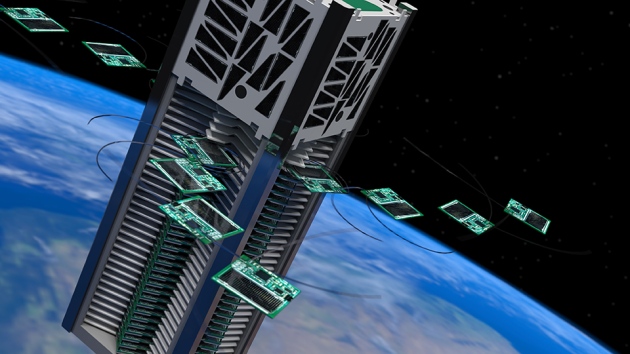 On 6 July, if all goes to plan, a pack of about 100 sticky-note-sized ‘chipsats’ will be launched up to the International Space Station for a landmark deployment. During a brief few days of testing, the minuscule satellites will transmit data on their energy load and orientation before they drift out of orbit and burn up in Earth’s atmosphere.

The chipsats, flat squares that measure just 3.2 centimetres to a side and weigh about 5 grams apiece, were designed for a PhD project. Yet their upcoming test in space is a baby step for the much-publicized Breakthrough Starshot mission, an effort led by billionaire Yuri Milner to send tiny probes on an interstellar voyage.

“We’re extremely excited,” says Brett Streetman, an aerospace engineer at the non-profit Charles Stark Draper Laboratory in Cambridge, Massachusetts, who has investigated the feasibility of sending chipsats to Jupiter’s moon Europa. “This will give flight heritage to the chipsat platform and prove to people that they’re a real thing with real potential.”

The probes are the most diminutive members of a growing family of small satellites. Since 2003, researchers have launched hundreds of 10-centimetre-sided CubeSats — more than 120 last year alone. Engineer Jekan Thanga at Arizona State University in Tempe is now working on an even smaller ‘femto­satellite’, a 3-centimetre cube that he says has the technological capacity of the first CubeSats. Chipsats, which are smaller and cheaper still, are seen as disposable sensors that could be sent on suicide missions to explore hostile environments, such as Saturn’s rings.

“They’re all part of the toolbox for next-generation space missions,” says Thanga.

The upcoming chipsat test, called KickSat-2, is the second incarnation of a crowdfunded mission developed by researchers at Cornell University in Ithaca, New York. The shoebox-sized KickSat-1 spacecraft successfully launched on 18 April 2014, but it failed to deploy its cargo of 104 chipsats after a cosmic radiation burst reset the clock on its release mechanism. The craft fell out of orbit and burned up with the chipsats still in its hold.

“I was a little bummed out,” says Zachary Manchester, an aerospace engineer who built the satellites as a doctoral student in aerospace engineering at Cornell. Fortunately, enough spare parts were lying around to make a second batch relatively quickly and easily.

The chipsats, called Sprites, carry little more than a pair of 60-milliamp solar cells, a radio and an antenna. The KickSat-2 payload includes some newer Sprites that can ‘sail’ by tilting towards or away from the Sun. A current is run through a coil, turning the chip into a compass needle that aligns with Earth’s magnetic field, allowing the chipsat to control its orientation. The probes can be reprogrammed on the fly from the space station.

Sprite prototypes have already proved that they can survive the rigours of space. In 2011, three chipsats were attached to the outside of the space station. They were still working when scientists retrieved them in 2014.

That commercial electronics are good enough to survive space’s vacuum and extreme temperatures is a “pretty big deal”, says Mason Peck, an aerospace engineer who leads Cornell’s chipsat team. But on a flight into deep space, chipsat electronics would face a high risk of damage from radiation. “There are some clear paths to radiation hardening, but it’s expensive,” says Peck. “And that’s not the point. You don’t want to make an exquisite satellite. You just launch a million; if only 1% survive then that’s fine. You put statistics on your side.”

There is plenty of science that Sprites can do closer to home. Peck says that the tiny satellites could be used to verify models of how small bits of debris behave in the upper atmosphere. Like feathers on Earth, the small, flat objects would be heavily affected by drag. “We’re not very good at modelling that,” says Peck. Another potential project would be to use Sprites to make a high-spatial-resolution map of Earth’s magnetic field.

“That would be really useful,” agrees Jeffrey Love, a geophysicist with the US Geological Survey in Denver, Colorado, who studies Earth’s magnetism. “Ideally you’d want to be measuring it everywhere all the time. This could be a step in that direction.”

For the long-term interstellar goal, chipsats will need much better laser-communication capacity. That should be possible, say Peck and Manchester, who are both on the Breakthrough Starshot advisory committee.

“We have gone a long way towards proving we can have a functional tiny craft,” says Peck.

KickSat-2's organizers say that last-minute paperwork problems will prevent their satellites from launching to the International Space Station on 6 July.