Is it an epic blunder or a textbook demonstration of how science should work? To some physicists, the OPERA (Oscillation Project with Emulsion-tracking Apparatus) collaboration deserves credit for disclosing possible errors in its paradigm-challenging measurement of neutrinos travelling faster than light. “I think we did the right thing to continue to investigate,” says Dario Autiero of the Institute of Nuclear Physics of Lyons in France, who presented the original results and notes that the collaboration had spent six months checking its result before its announcement last September.

To others, the revelation shows that the OPERA team went public too soon with its claim that neutrinos from CERN, the European particle-physics laboratory near Geneva in Switzerland, were flouting Albert Einstein’s absolute limit on the speed of light as they travelled the 730 kilometres to the OPERA detector at the underground Gran Sasso National Laboratory near L’Aquila, Italy. “I find it embarrassing,” says Luca Stanco of the National Institute of Nuclear Physics in Padova, Italy, an OPERA member who initially refused to sign a paper about the result. “Maybe we should have been more cautious and done more checks.” 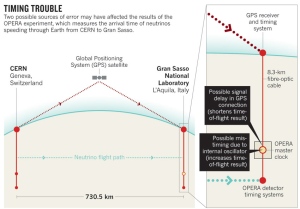 On 23 February, OPERA team members reported two possible sources of error in the experiment. The initial result suggested that the neutrinos were reaching the detector 60 nanoseconds faster than the speed of light would allow. Both potential errors would affect the neutrinos’ arrival time, as measured by OPERA’s master clock (see ‘Timing trouble’). The first is a faulty connection at the point at which the light from a fibre-optic cable brings a synchronizing Global Positioning System (GPS) signal into the master clock. The fault could have delayed the GPS signal, causing the master clock to run slow and thus causing the neutrinos’ travel time to appear shorter than it actually was.

“It’s a subtle effect,” says Autiero, and one that was evident only when the team examined many measurements of signals passing through the connection. Tests of the timing system turned up a second, opposing effect: an oscillator within the master clock that keeps time between the arrivals of synchronization signals was running fast. That would have made the neutrinos’ travel time seem longer.

The collaboration says that it has not yet worked out the magnitude of these effects. Autiero says that because of the high profile of the result and the possibility of rumours and leaks, the collaboration wanted to disclose the potential errors promptly. The OPERA team plans to correct the faults and repeat the experiment after CERN’s neutrino beam is switched on again in March, following a winter break.

Two independent checks of the measurement are also being considered. One, at Japan’s Tokai to Kamioka (T2K) neutrino experiment, would still be valuable despite the doubt cast on the OPERA data, but may now prove harder to fund, says international co-spokesman Chang Kee Jung, a physicist at Stony Brook University in New York. But another, the Main Injector Neutrino Oscillation Search (MINOS) experiment, which fires neutrinos from Fermilab in Batavia, Illinois, to an underground detector in northern Minnesota, will proceed, at a cost of about US$500,000. “It’s never a bad idea to have multiple measurements,” says MINOS co-spokesman Rob Plunkett.

Jorge Páramos, a physicist at the Higher Technical Institute in Lisbon, says that the admissions by OPERA point to an honest mistake, albeit one that should have been avoided. “The putative origin of the systematic error reflects the innards of the experiment — something that should have been checked exhaustively before any public announcement,” he says.