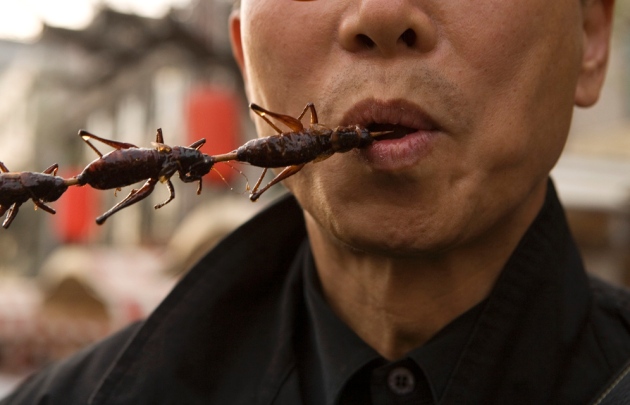 A man snacking on deep-fried grasshoppers in Beijing. The consumption of insects is not uncommon in China, but it still tends to be looked down on in the West.

Arnold van Huis, an entomologist at Wageningen University in the Netherlands, studies the eating of insects, or entomophagy, and is the author of 'Edible insects: future prospects for food and feed security', published in 2013 by the United Nations Food and Agriculture Organization. Now he is organizing the first international conference to address the question of whether insects can feed the world. Ahead of the conference opening on 14 May in Wageningen, van Huis talked to Nature about researching, and dining on, this neglected food source.

How did you get involved in entomophagy?

I’m a tropical entomologist, very much involved in pest management and biological control in the tropics. Locusts are one of my specialized areas. I had a sabbatical and I spent that studying the cultural aspects of insects in Africa. So I visited about 24 countries, interviewing a lot of Africans about insects as medicine, insects in proverbs, et cetera, but often half of my interviews were about edible insects. In the beginning for me it was kind of a hobby. But when we started to look at it more seriously, we thought, 'Well, this is a very good alternative to what we are currently doing'.

What excites you the most about the upcoming meeting?

It’s the first time that everybody in this field will come together on a world scale. Insects are still more or less considered a poor man’s diet. It still has that reputation. In the tropics they don’t talk about it, because they know that in the Western world people consider it primitive. I also found that a lot of people say, 'When we have more wealth, we will switch to a Western diet' — the hamburger instead of the insects. And I hope we can change this perception of insects as food during this conference.

Is the scientific field of entomophagy growing?

In the Western world it was rather limited ten years ago. I was one of the few who really started to work on it. There are people who have done quite some research on it — mainly in the fields of ethno-biology and ethno-entomology. But it was considered a peculiar habit of people in the tropics. Never was it looked at as something we could do as well.

The last ten years I’ve seen an exponential increase in interest. When we published the book last year, it had 6 million downloads. It just shows the tremendous interest. 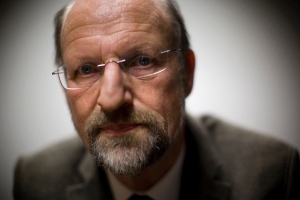 Arnold van Huis is hosting the world's first conference on the science of eating insects.

What are the biggest questions in the science of insects as food?

For human consumption, the processing is quite important — how to rear the insects, what kind of organic waste to grow them on — because that makes it economically interesting. If you look at the social sciences, of course, consumer attitude is quite important. It’s not just a matter of taste; it’s also a matter of emotions.

Can Western cultures overcome the ‘ick-factor’ about eating insects?

We produced a cookbook [The Insect Cookbook: Food for a Sustainable Planet], and for the English translation I interviewed René Redzepi, [chef and co-owner] of Noma, the Copenhagen restaurant that has just been declared again the best in the world [by Restaurant magazine]. He told me that concerning food, people are very, very conservative. But he has insects on his menu. Alex Atala, from a famous restaurant in Brazil [D.O.M. in São Paulo], also works with insects. And everybody is copying the cooks. I hope that at a certain moment — especially when cooks start experimenting with this on the television — it will go quickly.

Of the insects you have eaten, do any stick in your mind — either as surprisingly tasty or exceptionally unpleasant?

There are both. Let me start with the negative ones. There are flies from eastern African lakes that come out in huge clouds at certain Moon phases. People make a kind of cake out of it — kungu cake. I’ve tasted those and I didn’t like it at all. What I like most also depends a lot on the preparation. Crickets or grasshoppers can be made very delicious.