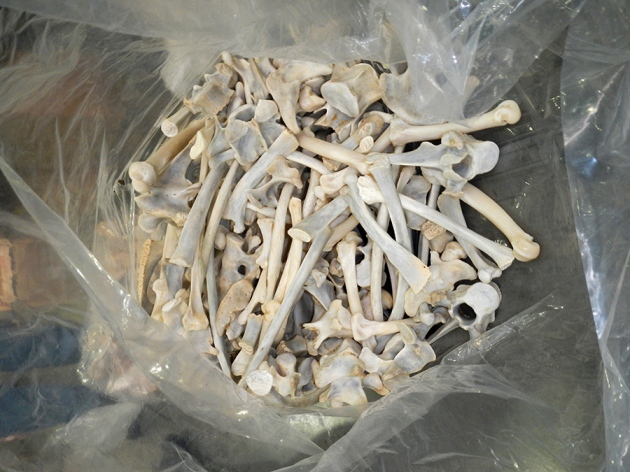 Lion bones (pictured) are being traded out of South Africa to satisfy demand for tiger parts in Asia.

A crackdown on illegal tiger products in China has created a soaring trade in lion bones from South Africa to Asia, ecologists say.

Alleged ‘tiger’-infused wines and traditional medicines are popular in China. But when the country tightened its rules on selling parts from tigers and other Asian big cats in 2006 and 2007, it may have "inadvertently set off a chain reaction of interlinking and unexpected events" that led to the bones of African lions being exported to fill the gap in demand, according to a 16 July study1. The report is published jointly by the Wildlife Conservation Research Unit (WildCRU) at the University of Oxford, UK, and the international wildlife organization TRAFFIC.

The trade in lion bones disguised as those from tigers had been recognized before, but not quantified, says ecologist Andrew Loveridge of WildCRU and a co-author of the study. The report shows that lion skeletons sold out of South Africa rose from around 50 in 2008 to 573 in 2011, most of which were destined for Asia. (Figures for more recent years are not yet available).

In a Correspondence to Nature2, published on 15 July, the study’s authors note that the South African trade is a by-product of the trophy-hunting industry and that hunted lions are almost exclusively captive-bred. South Africa is unusual in that some 68% of the more than 9,000 lions in the country are kept in captivity, often for big game-hunting enterprises, so sales were allowed under the Convention on International Trade in Endangered Species of Wild Fauna and Flora, a treaty that governs such transactions.

But Loveridge fears that the appetite for lion bones has grown so great that it may stoke trade from other African countries. Many do not have extensive captive lion populations, so wild cats might be put at risk.

The existence of a legitimate means to obtain wildlife products can encourage law-breaking by providing the market with a supply that is rare and thus highly coveted, conservationists say. Many point to the legally sanctioned practice of tiger farming in China, which has the biggest market for wildlife goods, as a model that has fueled the desire for tiger products.

Farms began appearing in the 1980s to breed the critically endangered animals. But investigations have found that the cats are instead frequently bred for their pelts and to be made into tiger-bone wine — a luxury spirit said to confer virility. Environmental groups, the World Bank and UK and Indian wildlife officials have all expressed their dismay at tiger farming, which they say incentivizes poaching.

Chinese officials have recently touted their intent to crack down on the illicit trade in wildlife by publicly destroying contraband ivory and participating in diplomatic discussions on tightening law enforcement. But they have been less willing to discuss demand. Zhao Shucong, the head of the Chinese State Forestry Administration in Beijing, told Nature: “We have a demand for food and water in China, not ivory.”

Tackling the demand for tiger parts will be even thornier given its commercial value, says Mahendra Shrestha of the Smithsonian Conservation Biology Institute in Front Royal, Virginia. “I’m not sure whether the minister understands the level of demand in China not only for ivory, but all kinds of wildlife parts and products,” he adds.

The report authors say that better distinguishing legally sold lion parts from other illicitly traded parts would help to impede unsanctioned exports. But conservationists agree that there is a pressing need to frustrate buyers by stamping out demand. “The solution has to be on the consumer side,” Loveridge says.