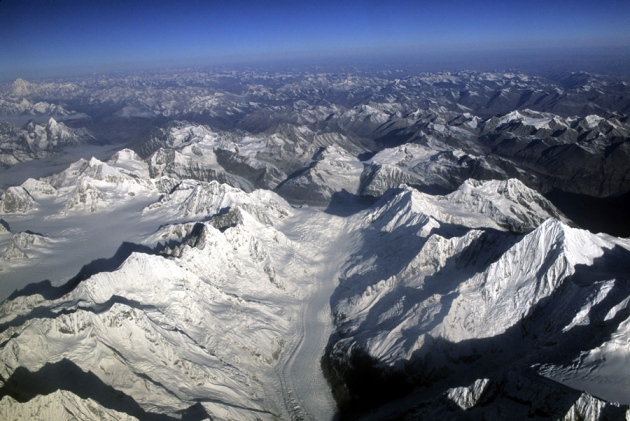 The Tibetan plateau, often called the third pole, will be monitored by balloons, drones and ground sensors.

The gigantic, remote Tibetan plateau is being flooded with sensors in an unprecedented attempt to understand its influence on climate — especially the Asian monsoons, which caused deadly flooding in India and Pakistan in September. The US$49-million Chinese effort could help to predict extreme weather — both in Asia and as far afield as North America — and give scientists a steer on how climate change affects these events.

Sitting at an average height of around 4,000 metres above sea level, the plateau protrudes into the middle of the troposphere, where most weather events originate. As the biggest and highest plateau in the world, it disturbs this part of the atmosphere like no other structure on Earth. But there are little data on the impact that this has on climate.

In central and western Tibet, where weather observations are particularly lacking, researchers jointly funded by the China Meteorological Administration and the National Natural Science Foundation of China began, in August, to place temperature and moisture detectors in the soil and to erect 32-metre-high towers laden with sensors that measure cloud properties. In recent weeks, the team has begun deploying sensors mounted on weather balloons and unmanned aerial vehicles.

Such sensors will eventually monitor a vast swathe of the plateau’s ground and air — across diverse landscapes such as desert, grassland, forest and farmland. “The data should help determine the extent to which different types of land surface heat up the overlying air, and how this might vary in response to factors such as snow cover and vegetation changes,” says Wu Guoxiong, an atmospheric scientist at the Institute of Atmospheric Physics of the Chinese Academy of Sciences (CAS) in Beijing and a principal investigator of the project.

Scientists agree that Tibet plays a key part in the climate system, but many of the details are a mystery. The plateau’s remoteness, altitude and harsh conditions — it is often called the third pole because it hosts the world’s third-largest stock of ice — mean that even basic weather stations are few. Satellite data are also plagued by large errors owing to lack of calibration from ground observations.

“Climate models have the greatest uncertainties in Tibet and the Himalayas, and are especially weak at simulating monsoons,” says Xu Xiangde, an atmospheric scientist at the Chinese Academy of Meteorological Sciences in Beijing and investigator on the project. This dearth of information about the plateau, acknowledged by the Intergovernmental Panel on Climate Change, affects scientists’ ability to predict how the climate is changing, and the consequences for people living in vulnerable regions.

The plateau’s altitude means that it receives more sunlight and so gets hotter than land at sea level. And because land absorbs more solar radiation than air, the plateau acts like a giant heating plate. This heat pumps air upwards, which disperses in the upper troposphere, giving the plateau an outsized influence over atmospheric circulation, and thus climate. The heating effect also intensifies monsoons, which arise as a result of a temperature difference between land and the oceans that sets up a pressure gradient in the atmosphere. In 2008, Wu reported that the surface heating of the plateau had been weakening since the 1980s (A. Duan & G. Wu J. Clim. 21, 3149–3164; 2008), consistent with a weakening in the strength of Asian monsoons. But monsoons seem to be getting stronger again, and occurring in places where they were previously rare, says Klaus Fraedrich, an atmospheric scientist at the University of Hamburg in Germany.

In early September, a deadly flood caused by a monsoon hit border regions between India and Pakistan that are normally dry, killing hundreds and affecting millions more. If the Chinese project can help to explain why monsoons are changing, it “could help instigate early evacuation plans and save many lives”, says Fraedrich.

The project could have yet broader effects. A team led by Hai Lin, an atmospheric scientist at Environment Canada in Quebec, found that the greater the snow cover in Tibet, the warmer the winter in Canada (H. Lin & Z. Wu J. Clim. 24, 2801–2813; 2011). The latest initiative could confirm Lin’s suspicion that increased snow cover causes the plateau to reflect more sunlight, reducing its heating capability and strengthening a pressure system that causes warmer-than-usual winters in North America. Ma Yaoming, an atmospheric scientist at the CAS Institute of Tibetan Plateau Research in Beijing, says that combined with data on glaciers, permafrost, rivers and lakes, the project will contribute to a better picture of Asia’s entire water cycle.