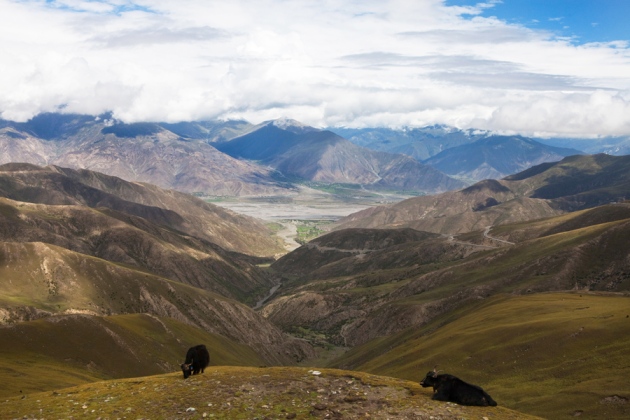 The Transhimalaya Mountains near Lhasa, in the Tibet Autonomous Region of China, may have stood as tall as they do now long before the Himalayas themselves existed.

The Tibetan Plateau supposedly rose as the Indian continent smashed into Eurasia about 50 million years ago. But the latest study of fossils and oxygen isotopes in the region's rocks shows that parts of southern Tibet were already as tall as they are today before the collision.

The findings challenge the conventional wisdom of what happens when continents collide, and because of the role of mountains in weather systems, also imply that the Asian monsoons could have been going on for much longer than previously assumed.

The Tibetan Plateau covers an area about one-quarter as large as the United States, with an average elevation of 5,000 metres. To the south, it is ringed by the Himalayas, which include the highest peaks in the world. How and when such a gigantic region rose up has been a matter of intense debate for decades.

To get a glimpse of topography of ancient Tibet, a team led by Ding Lin, a geologist at the Chinese Academy of Sciences’ Institute of Tibetan Plateau Research in Beijing, analysed 55-million-year-old rocks from the Linzhou Basin, about 50 kilometres northeast of Lhasa in Tibet.

The team measured the isotopes of oxygen from ancient rain and snow that would have been preserved in the rock. “As clouds climb up a mountain slope, water vapour with the heavier oxygen isotope, oxygen-18, rains out first,” says Ding. The higher the elevation, the less oxygen-18 precipitates, whereas the opposite holds for oxygen-16. Thus, the ratio of the two isotopes is a measure of elevation.

The ratio the researchers calculated points to rocks with an elevation of around 4,500 metres, as high as they are standing today. The findings were published in Earth and Planetary Science Letters1 last month.

Jay Quade, a geochemist at the University of Arizona in Tucson, says that the data should be interpreted with caution. Geological processes could bury rocks several kilometres below ground, where they would be cooked by high pressures and temperatures, and then bring them up to the surface again a few million years later. That cooking process could alter the isotope ratios, so that “they would no longer reflect the true altitude in the past”, he says.

In a region as tectonically active as Tibet, finding rocks that haven’t been altered by such a process is tricky, says Quade. He and many others independently found, for instance, that most rocks in the Linzhou Basin were pretty well cooked. 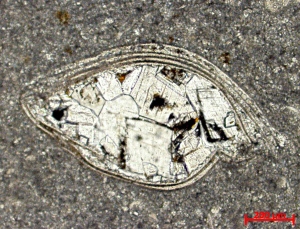 Light and dark bands on Tibetan fossil shells such as this (an ostracod) suggest that the surrounding rock was not subjected to extreme conditions.

But Ding and his team say that they can prove that the rocks they studied were not altered. Chemical signals of seasonal temperature fluctuations were preserved in the light and dark bands of rock-bound fossilized shells called ostracods (see picture). “If the rocks had been cooked, then the signals would be homogenized and you wouldn’t expect to see such seasonal cycles,” Ding says.

The ostracods “lend strong support” to the near-present elevation in southern Tibet before the collision between Eurasia and India, says Guillaume Dupont-Nivet, a geologist at France's National Centre for Scientific Research in Rennes.

Because the margin of southern Tibet is littered with ocean crust and volcanic rocks, the authors suspect that the mysterious mountain range that predated the collision could have been produced when an ancient oceanic plate called Neo-Tethys dove, or subducted, beneath the Eurasia plate, in a process similar to the one that created the Andes.

The finding will also “force us to rethink the evolution of Asian monsoons”, says Dupont-Nivet. The seasonal deluge evolved because of the high standing of the Tibetan Plateau and surrounding mountains, which block cold air from the north and enhance the difference between land and ocean temperatures. Current geological evidence points to the emergence of these monsoons 23 million years ago — coinciding with a time when the plateau and surrounding mountain ranges are thought to have become high and expansive, he says.

“If southern Tibet was 4,500 metres high 55 million years ago, then we should be able find much older monsoon records,” says Dupont-Nivet. Such information “is critical for understanding — and modelling — what drove monsoon cycles in the past and how they will change in the future”, he says.