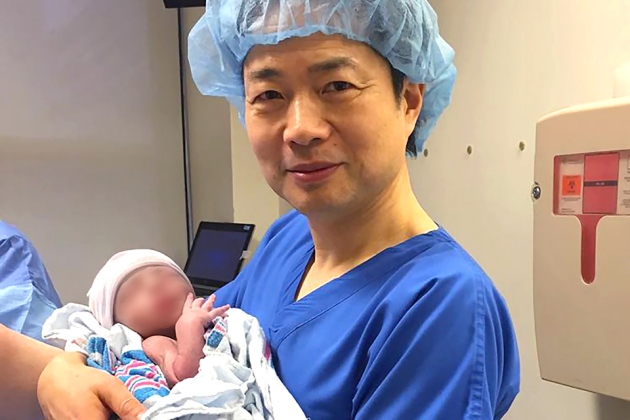 Team leader John Zhang and the ‘three-parent’ baby have made headlines across the world.

A reported world-first in fertility therapy — a baby boy conceived using a controversial technique that mixes DNA from three people — has made headlines across the world. But with no way of verifying the claim because the specialists behind the procedure will not release data until October, some researchers are questioning the ethics of the procedure. In particular, they ask why the US-based team behind the operation chose to carry it out in Mexico, a country with less-clear oversight of human-embryo modification than, for instance, the United Kingdom or the United States.

Researchers at the New Hope Fertility Center in New York City told New Scientist — which broke the news on 27 September — that they had conducted the procedure for a Jordanian couple, and that the baby boy was born in April. The team, led by John Zhang, a physician at the centre, is not due to present details until 19 October, at the American Society for Reproductive Medicine meeting in Salt Lake City, Utah, but it has published an abstract online with sparse information.

According to the abstract, the boy’s mother carries a rare disease called Leigh syndrome, a neurological disorder caused by faulty mitochondria, the cell’s energy-producing structures. The couple lost two children to the disease before asking for the clinic’s help.

In an attempt to create embryos without the mother’s faulty mitochondria, the clinic’s team transferred the nucleus of the mother’s egg cell to the egg of a donor with healthy mitochondria and its nucleus removed — a technique known as spindle nuclear transfer — and then fertilized it with the father’s sperm, the team reports in the abstract. Zhang’s team modified five embryos, one of which was implanted into the mother and survived to birth. That baby inherited nuclear DNA from both parents and mitochondrial DNA from the donor.

Although other ‘three-parent’ babies were born in the 1990s, they were created using a different technique in which mitochondria and other cellular material from the eggs of healthy donors were transferred into the eggs of the mothers, which were then fertilized with the fathers’ sperm.

So the achievement of Zhang team’s, if verified, would represent the first child conceived using the spindle-transfer version of mitochondrial-replacement therapy (MRT). In the United States, MRT is in principle allowed, but requires review and approval by the US Food and Drug Administration (FDA). Last year, Congress banned the FDA from using federal funds to review proposals that would manipulate the genetics of human embryos — hamstringing the agency. Lawmakers seem poised to continue the funding ban into the 2017 fiscal year. The United Kingdom, meanwhile, decided last year to allow MRT under licence.

“We’d love to do it with partners around the world and reach out to more families that might need help,” Zhang told Nature. He says that his group plans to monitor the baby to ensure that the technique was safe and effective.

Embryologist Jacques Cohen, who carried out mitochondrial-transfer procedures in the 1990s and is now laboratory director of the biotechnology company Reprogenetics in Livingston, New Jersey, was a regulatory adviser on Zhang’s study, and welcomes the news that the spindle-transfer method seems to be effective. “I think the world is ready to try this out. It has been discussed for a long time,” he says. “I think there are risks, but that’s what happens when you do experimental procedure for the first time.”

Cohen’s clinic produced 17 babies before the US began to regulate MRT in 2002. He has recently followed up with 13 of the children from his study — now teenagers — and is about to publish an article about their outcomes. Although he declines to give details, Cohen says that they have no obvious health problems.

But some other researchers are troubled by Zhang’s announcement. “They just went ahead and did it,” says David Clancy, who studies mitochondrial biology at Lancaster University, UK. “The number of issues that are still unresolved — it’s just staggering.”

Among the unknowns is the possibility that the technique could transfer some diseased mitochondria from the mother into the donor egg along with the nucleus. According to Zhang’s abstract, 5% of the embryo’s mitochondrial DNA was the mother's, carried over along with the nucleus — but mitochondrial DNA samples taken from the baby after birth varied from tissue to tissue and suggested a level of faulty DNA that was, on average, 1.6%.

Cohen says that it is generally thought that no symptoms will occur if fewer than about 20% of mitochondrial DNA are faulty. But Dietrich Egli, a stem-cell scientist at the New York Stem Cell Foundation who is also developing mitochondrial-transfer techniques, says that 5% at the embryo stage is 10 times higher than that seen in studies using spindle transfer1 on embryos not destined for implantation. As a result, he says, the technique “was not carried out well”. “It is a remarkable step, but unfortunately it is not well done,” he adds.

Clancy notes that it is impossible to analyse mitochondria in a living human from organs such as the heart and brain, and that weak mitochondria would be particularly problematic in these organs.

More concerning to some researchers is the fact that Zhang’s procedure was performed in Mexico. Zhang told New Scientist that “there are no rules” in Mexico. Legal scholar Rosario Isasi at the University of Miami in Florida says that there are laws governing the manipulation of human genes — but she adds that they are badly worded, and that there are exemptions that seem to be made for manipulations intended to cure deadly disease.

Isasi questions the wisdom of performing the procedure in Mexico, which has a reputation of attracting patients from elsewhere who seek unproven cures that are not allowed in their own countries, instead of a country such as Sweden, whose government closely regulates the clinical use of therapies. “You have all these negatives, and it’s not a place that can offer the scientists a high-tech environment,” says Isasi.

The clinic chose Mexico because it already had a branch there, New Hope spokesperson Geoffrey Hawes told Nature. He declined to comment on whether the regulatory environment in Mexico played a part in the decision. “It’s off limits. We won’t comment on regulations,” he says.

In a statement sent to Nature, reproductive biologist Shoukhrat Mitalipov at the Oregon Health and Science University in Portland, who pioneered spindle transfer in primates and is currently seeking approval to perform human trials, said that the strict US regulations are forcing researchers to move trials into other countries. “We believe it’s time to move forward with FDA-approved clinical trials in the United States,” he says.

Egli is worried that any poorly done research in this area could hurt the chances of other groups as governments debate whether to allow the techniques. “I think this kind of new technique needs a very serious approach and careful planning,” he says.

Isasi points out that Zhang’s group did seem to follow ethical guidelines put forward by professional societies such as the US National Academies of Sciences, Engineering and Medicine. The baby was a boy, and many guidelines specify that only male embryos should be brought to term: because children receive mitochondria only from their mothers, there is no risk of a male passing the donated mitochondria on to his offspring.

An earlier version of this story stated that Zhang’s team implanted three embryos into a woman in 2003; it now makes clear that the team transferred five embryos into the woman.