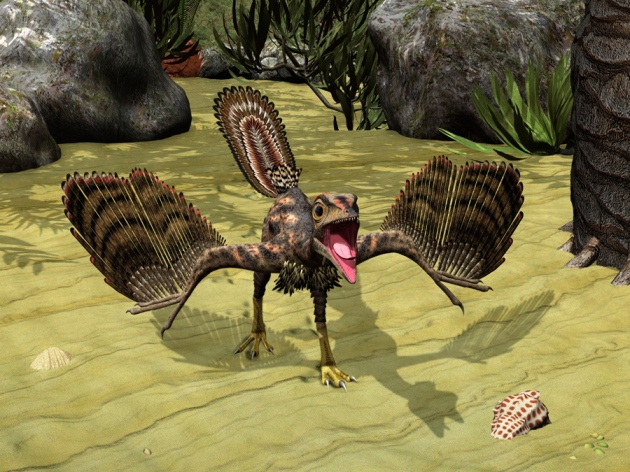 The anatomy of the bird-dinosaur Archaeopteryx, depicted here near the shore of the Tethys Sea (modern-day Europe), is reminiscent of that of modern flightless birds that descended from flying ones.

Although it has long been debated whether the proto-bird Archaeopteryx was able to actually fly or merely evolving toward that ability, to date nobody had yet seriously suggested that it could have been instead in the midst of losing its ability to fly. But that is precisely what Michael Habib, a biologist at the University of Southern California proposed last week to a packed hall at the annual meeting of the Society of Vertebrate Paleontology in Los Angeles.

With the skeleton of a dinosaur and the feathers of a bird, Archaeopteryx has long been hailed as marking the transition from dinosaurs to birds.

The idea that it was instead evolving to lose its flight and becoming flightless again, or 'secondarily flightless', occurred to Habib while he was calculating limb ratios and degrees of feather symmetry in Archaeopteryx, and comparing the values to those of living birds, to better understand its flying ability. In doing so, he found that the creature's traits were surprisingly similar to those of modern flightless birds such as rails and grebes that frequently dwell on islands.

“We know Archaeopteryx was living on an archipelago during the Jurassic. And with its feathers and bones looking so much like modern flightless island birds, it just makes me wonder,” says Habib.

When Archaeopteryx was first discovered, it was the earliest known feathered dinosaur, and the argument that it was evolving towards flightlessness might have been considered madness. But with the discovery in recent years of many earlier feathered dinosaurs with anatomies tailored for flight, the idea is being seriously considered.

“Just because Archaeopteryx was the first feathered dinosaur found, doesn’t mean it has to play a central role in the actual history of the origins of birds,” says palaeontologist Thomas Holtz of the University of Maryland in College Park. “We have to remember it appears 10 million years or so after the oldest known bird-like dinosaurs and so our famous 'first bird' may really be a secondarily flightless one.”

But many are sceptical. “I am wary to call Archaeopteryx secondarily flightless, since we do not yet know if its ancestors could fly,” says Ashley Heers, a biologist at the Royal Veterinary College in Hatfield, UK.

Habib's presentation, along with others exploring what ancient birds could and could not do, has sparked intense interest in variations between the anatomies of modern birds that display different behaviours.

“Living birds use their wings for so many different things, like flap-running up slopes and rowing across water,” says Heers. “We really need an improved understanding of how anatomy relates to these diverse behaviours, so we can better interpret the fossil record.”

And to drive the matter home, Heers and her colleague Kenneth Dial, a biologist at the University of Montana in Missoula, pointed out at the conference that there are many birds that are better fliers as juveniles than as adults and that a few species even lose flight completely as they mature. “Perhaps young Archaeopteryx flew, but adults were more ground-based,” suggests Holtz.

If this proves true, then the answer to the question of whether Archaeopteryx flew could prove an infuriating “sort of”.