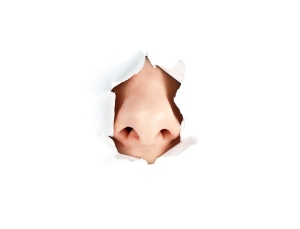 Neither pleasant nor foul-smelling, and in no way overwhelming: this is how researchers sum up the smell they are calling “olfactory white”.

The smell was uncovered during experiments that mixed aroma molecules from across the scent spectrum. Even if two mixtures had no components in common, they tended towards having a similar scent as more aromas were added. By the time they contained about 30 components, most mixtures smelled alike1, and could mask other distinctive smells.

The researchers say that the resulting smell, which is unlikely to occur naturally, has parallels with both white light and 'white noise'. These are produced by combining the wavelengths of the visible spectrum and different sound frequencies, respectively.

Given that our noses contain hundreds of different odour receptors, the phenomenon is counterintuitive, says Noam Sobel, an neuroscientist at the Weizmann Institute of Science in Rehovot, Israel, who led the work, published today in the Proceedings of the National Academy of Sciences. “One might imagine that the more odours are added, the more 'special' the odour would become,” he says, “Yet what we show is the opposite.”

Sobel and his team selected 86 single-molecule odorants, representative of the known scent spectrum, and diluted each to the same perceived intensity. They assembled 191 pairs of non-overlapping aroma mixtures, each containing up to 43 of the molecules spaced out over the olfactory spectrum, and asked 56 volunteers to rate the similarity of a selection of the pairs.

The results showed that the more components each of the two mixtures contained, the more alike they smelled. Volunteers consistently began to find the mixtures similar at 20 or more components, and by 30 components the mixtures were “highly similar” — a trend that implies there is an end point of perceptual convergence, olfactory white.

The phenomenon was confirmed by a further experiment with a different series of four newly generated 40-component mixtures labelled 'laurax'. Participants were familiarized with one of them. When smelling odorant mixtures they had not smelled before, volunteers were more likely to identify the scent as laurax if a mixture contained 20 or more components. Participants applied the laurax label to novel 40-component mixtures 58% of the time, and a follow-up study confirmed that most could still identify — and so remember — the laurax smell six months later.

Just as the colour white comes in different shades, all still identifiable as white, so too can olfactory white, says Sobel. But there are limitations. Unlike light and sound, the full extent of olfactory space — all the molecules we can smell — has not yet been identified. This doesn't invalidate the concept of olfactory white, Sobel says, but does mean that its 'true' smell is likely to be different from the white that the study has identified.

Olfactory researcher Donald Wilson of New York University Langone Medical Center describes the finding as “fundamental”. “It tells us something very basic about how the olfactory system deals with mixtures,” he says.

And Hiroaki Matsunami, an olfactory researcher at Duke University in Durham, North Carolina, says that the findings enhance the idea that the olfactory system doesn't detect individual molecules, but odours as a whole.

But does the finding have any real-world applications? A further experiment by Sobel and his team indicated that it does. When the four molecules key to the smell of rose were combined with an olfactory white mixture, the rose smell was effectively obscured — showing that olfactory white could be used to mask odours, from the smell of public toilets to that of cocaine or explosives.

However, the physiological mechanism that causes different mixtures to smell alike remains to be established. But Sobel guesses it is unlikely to involve the receptors in the nose because the 30 odours would have to activate so many receptors there, which are known to be quite specific. “I think it is something happening in the brain,” he says.