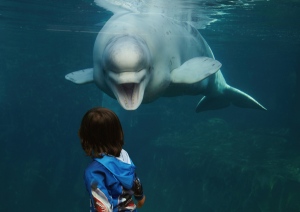 “Who told me to get out?” asked a diver, surfacing from a tank in which a whale named NOC lived. The beluga’s caretakers had heard what sounded like garbled phrases emanating from the enclosure before, and it suddenly dawned on them that the whale might be imitating the voices of his human handlers.

The outbursts — described today in Current Biology1 and originally at a 1985 conference — began in 1984 and lasted for about four years, until NOC hit sexual maturity, says Sam Ridgway, a marine biologist at National Marine Mammal Foundation in San Diego, California. He believes that NOC learned to imitate humans by listening to them speak underwater and on the surface.

NOC shows off his ability to make human-like sounds.

A few animals, including various marine mammals, songbirds and humans, routinely learn and imitate the songs and sounds of others. And Ridgway’s wasn’t the first observation of vocal mimicry in whales. In the 1940s, scientists heard wild belugas (Delphinapterus leucas) making calls that sounded like “children shouting in the distance”2. Decades later, keepers at the Vancouver Aquarium in Canada described a beluga that seemed to utter his name, Lagosi.

Ridgway’s team recorded NOC, who is named after the tiny midges colloquially known as no-see-ums found near where he was legally caught by Inuit hunters in Manitoba, Canada, in the late 1970s. His human-like calls are several octaves lower than normal whale calls, a similar pitch to human speech. After training NOC to 'speak' on command, Ridgway’s team determined that he makes the sounds by increasing the pressure of the air that courses through his naval cavities. They think that he then modified the sounds by manipulating the shape of his phonic lips, small vibrating structures that sit above each nasal cavity.

“We do not claim that our whale was a good mimic compared to such well known mimics as parrots,” but it is an example of vocal learning nonetheless, the paper concludes. “It seems likely that NOC’s close association with humans played a role in how often he employed his human voice, as well as in its quality.”

Andy Foote, a marine ecologist at the University of Copenhagen who has studied vocal learning in killer whales, agrees that NOC's calls sound human. Belugas are known as the 'canaries of the sea,' beacuse of the wide range of their vocal calls. Killer whales, by contrast, produce a more limited range of sounds that rarely stray from the calls of their group, Foote notes, which could explain why Shamu and other captive orcas have never mimicked human speech.

Those looking to hear NOC for themselves will have to settle for these recordings. He died several years ago.