Zika funding boost US President Barack Obama requested US$1.8 billion in emergency funding to fight Zika virus, the White House announced on 8 February. The mosquito-transmitted virus might be linked to head malformations called microcephaly in newborn infants, and has mostly affected countries in South America. The World Health Organization has declared the rise in microcephaly a global health emergency. The president’s proposal is part of his 9 February US budget request, and would give around $1.5 billion to the Department of Health and Human Services, including $828 million for the US Centers for Disease Control and Prevention to research the virus, and about $200 million to develop a vaccine. The US Agency for International Development will get $335 million. 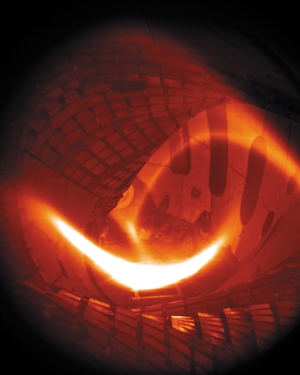 Reactor roars into life German Chancellor Angela Merkel ignited the first hydrogen plasma at the Wendelstein 7-X stellarator in Greifswald on 3 February, marking the device’s official launch. The fusion reactor’s design differs from that of the other most-promising fusion facility, ITER, being built near Cadarache, France. The official switch-on produced a hydrogen plasma for just a fraction of a second, but the helical-shaped stellarator should be able to operate continuously — a major advantage over the pulsed generation of ITER’s tokomak design.

Copenhagen cuts Government budget cuts in Denmark have forced the University of Copenhagen to slash staff numbers. More than 500 employees will lose their jobs, one-quarter of them researchers, according to a 4 February news release from the university. Voluntary redundancies and discontinued contracts will make up 323 of the job losses, and 209 staff can expect to be laid off. The university will also reduce its PhD intake by 10%.The job losses come after the Danish government cut funding for research by 1.4 billion kroner (US$210 million) in October.

Climate-job losses Hundreds of climate researchers at Australia’s national science agency, the Commonwealth Scientific and Industrial Research Organisation (CSIRO), are set to lose their jobs. Chief executive Larry Marshall said on 4 February that the agency would be shedding up to 350 jobs over the next two years as it shifts its strategy away from basic climate science. CSIRO, which employs more than 5,000 people, had already dropped 1,300 jobs in the 2 years up to June 2015, largely because the 2014 federal budget cut the agency’s funding by Aus$115 million (US$108 million) over 4 years. See go.nature.com/apbkmk for more.

Drug-trial probe A preliminary investigation into the death of a participant in a first-in-human drug trial in France, and the hospitalization of five others, has failed to establish a cause. In a report to health minister Marisol Touraine on 4 February, the general inspectorate for social affairs criticized trial contractor Biotrial for giving doses of the test drug to other subjects on 11 January, despite the first subject having been hospitalized the previous day. The trial was halted later that day, and the report says that Biotrial respected trial protocols. The five patients have since been discharged from hospital.

Methane lawsuit The state of California announced on 2 February that it had filed a lawsuit against the Southern California Gas Company for failing to promptly report and halt emissions from a massive natural-gas leak at one of its storage facilities. Discovered on 23 October last year, the gas leak at the Aliso Canyon natural-gas storage facility has yet to be controlled. As of 8 January, cumulative methane emissions from the facility were estimated to be equivalent to more than 2 million tonnes of carbon dioxide, or 2% of the state’s greenhouse-gas emissions over the 11-week period.

Italian misconduct The ethics committee of Italy’s National Research Council, the CNR, announced on 9 February that it has identified 17 cases of scientific misconduct in published papers co-authored by researchers in CNR labs. The CNR did not publicly identify the papers, but says that it is discussing next actions with the relevant authors. The committee assumed responsibility for research integrity two years ago, and is now examining a further 61 cases. It published guidelines for good scientific practice in June last year, committing it to investigating all allegations of misconduct brought to its attention.

Smoking laws Smoking bans around the world have measurably improved the health of non-smokers, according to a 4 February review (K. Frazer et al. Cochrane Database Syst. Rev. 1, CD005992; 2016). A group of systematics reviewers known as the Cochrane Collaboration assessed research from 21 countries and found improvements in cardiovascular health and reduced mortality from smoking-related illnesses since the first national ban, in Ireland in 2004. Effects on respiratory health, however, were “less consistent”. In total, 77 studies were assessed by the Cochrane team, and the findings strengthen the conclusions made in a previous review in 2010, the researchers say. 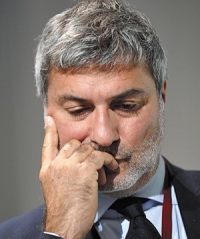 Macchiarini out On 4 February, the Karolinska Institute (KI) in Stockholm announced that it will not renew the contract of surgeon Paolo Macchiarini (pictured) when it ends in November 2016. The KI visiting professor pioneered artificial-windpipe transplants. A Swedish documentary alleged that he broke ethical guidelines, prompting the KI to consider reopening an investigation into Macchiarini’s work and to ask him to phase out his research. The KI has also ordered an external investigation into the way the case was handled. Urban Lendahl, a geneticist at the KI, resigned as secretary-general of the Nobel Assembly on 6 February because he expects to become involved in the investigations. See go.nature.com/rh1ne4 for more.

HHMI president The Howard Hughes Medical Institute (HHMI) in Chevy Chase, Maryland, has appointed its first female president. Erin O’Shea, a systems biologist from Harvard University in Cambridge, Massachusetts, will take office in September, the organization announced on 3 February. O’Shea, whose speciality is gene regulatory networks, has served as HHMI’s chief scientific officer and vice-president since 2013. She will be HHMI’s sixth president, replacing biochemist Robert Tijan of the University of California, Berkeley.

CRISPR goes public Editas Medicine, a company in Cambridge, Massachusetts, that aims to create therapies from CRISPR–Cas9 gene-editing technology, went public on 2 February, raising US$94.4 million. The initial public offering was seen as a vote of confidence both in the sluggish biotechnology market and in a tool that has yet to reach clinical testing. Several pioneers in CRISPR–Cas9 technology are among the founders of the company.

China chemicals bid China National Chemical (ChemChina) has offered to buy agrochemicals firm Syngenta in a US$43-billion deal that could alter the landscape of the industry. Syngenta, headquartered in Basel, Switzerland, is best known for its agricultural seed and pesticides business, and was wooed by its competitor Monsanto in a takeover bid last year. But on 3 February, Syngenta announced that it had accepted an offer from ChemChina of Beijing. The deal must be approved by regulators before it can be completed. 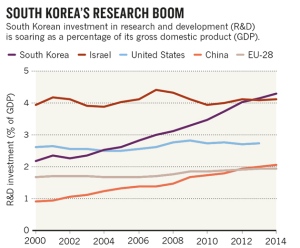 South Korea is the world’s most research-intensive economy, according to figures from the Organisation for Economic Co-operation and Development (OECD). In 2014, South Korea invested 4.29% of its gross domestic product (GDP) in research and development (R&D) — stretching ahead of Israel, which invests 4.11%. The South Korean increase is largely due to rising industrial investment, and the country is aiming to spend 5% of GDP on research by 2017.

11 February
A hotly anticipated announcement from the LIGO collaboration about the existence of gravitational waves, which were predicted 100 years ago by Albert Einstein, will be made at the National Press Club in Washington DC.
go.nature.com/cqt5te

14–19 February
Whitefly, which can devastate crops, is discussed at the 2nd International Whitefly Symposium in Arusha, Tanzania.
www.iita.org/iws2016