Femtochemist dies Ahmed Zewail, the winner of the 1999 Nobel Prize in Chemistry, died on 2 August, aged 70. He is credited with founding the field of femtochemistry, which probes the mechanics of chemical reactions using laser pulses lasting just tens of femtoseconds (1 femtosecond is 10–15 s). An Egyptian-born US citizen working at the California Institute of Technology in Pasadena, Zewail was the first Arab to win a science Nobel. He championed science education and research in his native country and founded the Zewail City of Science and Technology, a university that opened its doors to students in 2012 near Cairo. 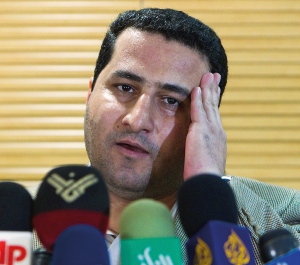 Iran executes scientist Shahram Amiri, an Iranian nuclear scientist, has been hanged for espionage, his country’s officials announced on 7 August. Amiri said that he had been abducted by the CIA during a pilgrimage to Saudi Arabia in 2009, and taken to the United States to be interrogated and tortured. But the US government denied that, and US media alleged that he had been a paid informant who defected voluntarily. He returned to Iran in 2010 and was later convicted of passing secrets about Iran’s nuclear activities to the United States. Iran has maintained that its nuclear programme has only peaceful purposes. Amiri was reportedly an isotope researcher at the Malek-Ashtar University of Technology in Tehran.

Cancer drug fails A promising lung-cancer drug failed in a key clinical trial, sending stock in the drug’s developer, Bristol-Myers Squibb, tumbling by 17% on 5 August. The drug, called Opdivo (nivolumab), is one of a suite of new cancer therapies that release immune responses against tumours by blocking a protein called PD-1. Opdivo has been shown to benefit some people with advanced cancers, including lung cancer. But Bristol-Myers Squibb, which is based in New York City, announced last week that Opdivo had failed as a front-line therapy for lung cancer. Stock in a competing firm, Merck of Kenilworth, New Jersey, rose 10% after the news.

Turkish purge The Turkish research agency TÜBİTAK in Ankara has removed 139 staff from their posts, pending investigations into their possible connections with the Gülen movement, which President Recep Tayyip Erdoğan claims was behind the country’s attempted coup last month. A further 28 staff have resigned, according to statements by Turkish science minister Faruk Özlü on 5 August. TÜBİTAK, which helps to design the country’s research policy and distributes grant money, has previously been purged. In 2014, agency engineers were dismissed after they declared that incriminating recordings of allegedly tapped telephone conversations between Erdoğan and his son — which Erdoğan said were fabricated — were not manipulated.

Mosquito trial The US Food and Drug Administration announced on 5 August that a proposed Florida field test of genetically modified mosquitoes poses few risks to the environment or human health. The announcement clears the way for the board of the Florida Keys Mosquito Control District to allow the release of Aedes aegypti mosquitoes carrying a gene that kills the insects’ offspring, in an effort to control diseases they transmit, including dengue and Zika viruses. Local residents will vote in a non-binding referendum, currently slated for November, before the board decides whether to go ahead with the trial.

Data push-back A coalition of researchers has rebuffed a proposal to share clinical-trial data rapidly. In February, the International Committee of Medical Journal Editors (ICMJE) proposed that clinical-trial leaders should make the de-identified patient data that underlie a journal article public within six months of publication. The 282 signatories to an article published on 4 August in The New England Journal of Medicine said that the ICMJE proposal was too burdensome and would have unintended consequences, such as delaying publication of results (N. Engl. J. Med. 375, 405–407; 2016). They said that researchers should have at least two years — but up to five — to make data public.

US climate rule The White House released a sweeping new climate policy on 2 August, instructing all federal agencies, from the Department of Agriculture to the Department of Transportation, to consider the impacts of their actions on climate change from now on. The agencies are also required to quantify those impacts, mainly in terms of greenhouse-gas emissions. The policy comes from the White House Council on Environmental Quality, which was established in 1969 to advise agencies when they are preparing environmental-impact statements.

Private Moonshot A private mission to the Moon has been approved for the first time, by the US government. Moon Express, a company in Cape Canaveral, Florida, announced on 3 August that it had been given permission to travel beyond Earth’s orbit and put a robotic lander on the Moon in 2017. Moon Express was founded in 2010 by three technology entrepreneurs, and is one of the companies competing for the Google Lunar XPRIZE; the competition will award US$20 million to the first company to land a privately funded spacecraft on the Moon. Moon Express is yet to finish building its MX-1 lander (pictured, artist’s impression). 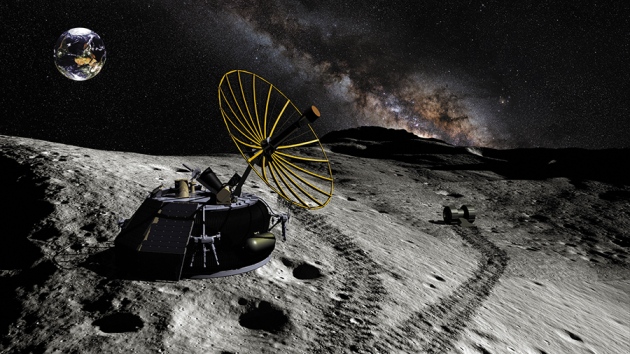 Missing vaccines An investigation by the Associated Press has reported that 1 million yellow-fever vaccines sent in February by the World Health Organization and its partners to tackle a large outbreak in Angola cannot be accounted for. Six million vaccines were sent in total. Of those that can be traced, some were sent to regions where there was no yellow fever; others were improperly stored, or arrived without the syringes to administer them, according to the 5 August report. The agencies involved have responded that a wastage of around 10% is expected in mass-vaccination campaigns for yellow fever — and Angolan officials have denied that any vaccines went missing.

Goodnight Yutu China’s moon rover Yutu, or Jade Rabbit, was officially declared dead by state officials on 3 August. It arrived on the Moon in December 2013, and was intended to carry out a three-month exploration of the lunar surface, but it survived for more than two years before going dark for the last time. The six-wheeled, solar-powered rover was struck by mechanical difficulties in early 2014, but had already used its penetrating radar to probe the structure of the lunar soil to a depth of more than 100 metres, and sent back data and high-resolution images to Earth. The mission made China the third country to land a craft on the Moon, after the United States and the Soviet Union.

APS moves meeting A division of the American Physical Society (APS) has voted to move its 2018 annual meeting from its originally planned location of Charlotte, North Carolina, as a result of a state law, enacted in March, that forces transgender people to use only toilets that correspond to their sex at birth. The chair of the APS Division of Atomic, Molecular, and Optical Physics said that it wanted to “provide a welcoming environment for all members”. The APS, which made the statement on 4 August, will hold its conference in Florida instead.

Zika in Cuba Cuba has discovered two cases of locally acquired Zika-virus infection, the nation’s health ministry announced on 4 August. The country’s preventive campaigns had been largely successful in staving off infections, with only 30 imported cases identified in Cuba this year, and only one previous locally transmitted case, in March. On 3 August, the US National Institutes of Health (NIH) launched the first clinical trial of a Zika vaccine, which it plans to test in 80 healthy volunteers. NIH officials say that the vaccine will probably not be ready for deployment until 2018.

Climate-cut U-turn Australia’s government has ordered its national science agency to re-prioritize basic climate research, six months after the organization unveiled controversial plans to slash jobs in the sector. The Commonwealth Scientific and Industrial Research Organisation (CSIRO) will — on government instructions — create 15 new climate-science jobs and receive an extra Aus$37 million (US$28 million) over the next 10 years, science minister Greg Hunt announced on 4 August. But the intervention may have come too late to repair damage already caused, researchers say. See go.nature.com/2akgeyp for more.

Zebrafish (Danio rerio) are the rising stars of model-organism research, an analysis of grants from the US National Institutes of Health (NIH) finds. A team at the NIH Office of Portfolio Analysis used text mining and manual searching to assess successful applications for R01 awards, the NIH’s main grant programme for individual investigators. Whereas the proportions of grants allocated to zebrafish and Caenorhabditis elegans studies rose between 2008 and 2015, the fraction for research with Xenopus frogs fell. 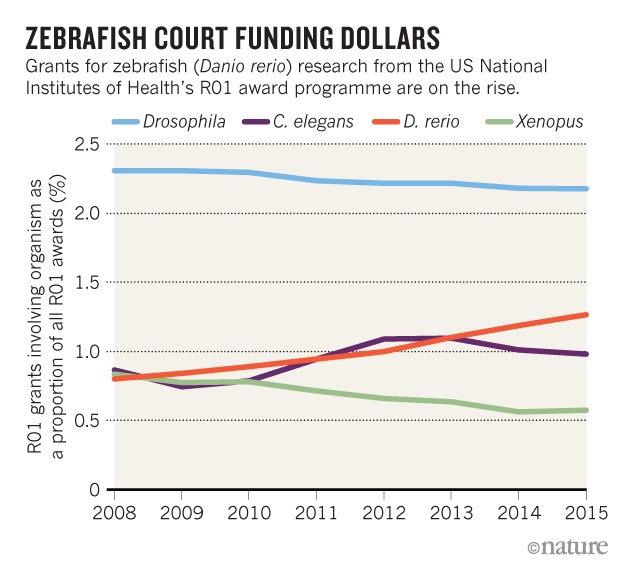 21–25 August
Scientists come together in Philadelphia, Pennsylvania, for the American Chemical Society’s national meeting and exposition, where topics will include the science behind Pixar.
go.nature.com/2ayecj7