Zika emergency The World Health Organization (WHO) has declared a global public-health emergency over the cluster of birth-defect cases linked to the outbreak of Zika virus in Brazil and the Americas. The mosquito-borne virus has been linked to a condition called microcephaly, in which babies are born with abnormally small heads and brains, in children born to infected mothers. WHO experts say that the link is strongly suspected, if not yet scientifically proven. According to the Pan American Health Organisation, the disease is now present in 26 countries and territories in the Americas. The WHO says that restrictions on travel and trade are not necessary. See pages 5 and 13 for more.

Scandal memoirs Haruko Obokata, the researcher at the centre of a stem-cell scandal, released a memoir on 28 January. Obokata’s claims that embryonic-like stem cells could be created by stressing mature mouse cells in a process called stimulus-triggered acquisition of pluripotency (STAP) fell apart, and two Nature papers were retracted in July 2014. In the book, Obokata attempts to shift responsibility for part of the scandal to a former mentor. Fifty thousand copies of the book were released initially. According to publisher Kodansha, many stores have sold out. 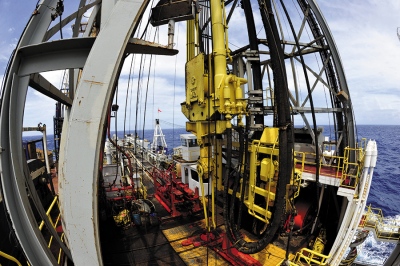 Ocean-floor drilling mission digs deep An expedition in the Indian Ocean that aimed to create the deepest hole ever drilled into the ocean crust ended on 27 January, having reached 789 metres below the sea floor. Project scientists had hoped that drilling with the JOIDES Resolution ship would reach at least 1.3 kilometres, but say they are happy with the depth achieved. They intend to return and try to deepen the hole to reach the boundary between Earth’s crust and mantle. The two-month expedition was sidetracked in part by a team member requiring medical evacuation to Mauritius in the middle of drilling.

Embryo editing In a world first, the UK Human Fertilisation and Embryology Authority has given scientists permission to edit the genomes of human embryos for research. The decision, announced on 1 February, allows developmental biologist Kathy Niakan at the Francis Crick Institute in London to use the genome-editing technique CRISPR–Cas9 in healthy human embryos. Niakan’s team plans to alter genes that are active in the first few days after fertilization. After seven days, the experiments will end and the embryos will be destroyed. See page 18 for more.

Ancestry error Software problems have forced researchers to go back on claims that humans across the whole of Africa carry DNA inherited from Eurasian immigrants. The authors issued a note explaining the mistake in an October 2015 Science paper on the genome of a 4,500-year-old man from Ethiopia (M. Gallego Llorente et al. Science 350, 820–822; 2015). The paper had confirmed findings that although the first humans began to leave Africa 100,000 years ago, a group returned some 3,000 years ago. But its conclusion that the backflow reached West and Central Africa was wrong. The authors say that they used incompatible software packages to compare genetic variants, causing the error. See go.nature.com/tzfing for more.

Uranium glut The world’s civilian research reactors are taking too long to eliminate the use of highly enriched uranium, says a 28 January report from the US National Academies of Science, Engineering, and Medicine. Despite calls to phase out weapons-grade uranium, which is enriched to 90% or greater in the uranium-235 isotope, 74 reactors continue to use it. As an interim step to phasing it out completely — a process likely to take two decades — the report recommends blending the fuel to 45% enrichment or less.

Diagnostics deal Global health-care company Abbott is to buy diagnostics firm Alere for US$5.8 billion. The buyout, announced on 1 February, will bolster Abbott’s diagnostics portfolio. Alere, in Waltham, Massachusetts, has annual sales of $2.5 billion and makes a range of point-of-care tests that can be used in remote locations to detect infections including HIV, tuberculosis, malaria and dengue. If the deal is approved, the firm will become an Abbott subsidiary, and Alere shareholders will get $56 per share. 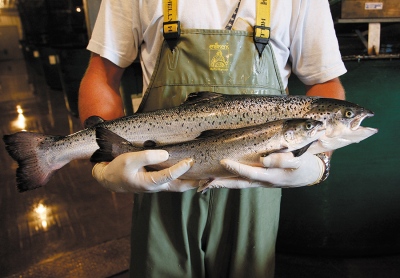 Fish flip-flop Despite the decision last November by the US Food and Drug Administration (FDA) to approve genetically modified salmon for human consumption, Americans will not be eating the fish any time soon. On 29 January, the FDA banned imports of fast-growing salmon produced in Panama and Canada by AquaBounty Technologies of Maynard, Massachusetts. The move is in response to the US budget bill passed last December, which bans sales of the fish until the FDA decides whether it should be labelled as genetically modified. The agency may take several years to finalize this rule.

EU car tests The European Commission has unveiled tougher vehicle standards for car manufacturers in the wake of the Volkswagen emissions scandal. The proposed rules, announced on 27 January, will include increased independence of vehicle-emissions testing, spot checks on cars already on the market, and more powers for European authorities in an area that has been mainly the responsibility of individual governments. Volkswagen is still dealing with the aftermath of the revelation that it fitted some vehicles with devices that were designed to fool emissions tests. The company faces legal action from governments and consumers.

Pipeline policy Pipelines and other natural-resource projects in Canada will soon be subject to more-robust environmental and public-review processes. The new assessment, announced on 27 January, will analyse greenhouse-gas emissions from construction and processing, and will include a broader public-consultation process, emphasizing the rights of indigenous peoples. The announcement is part of a broader effort by Prime Minister Justin Trudeau to bolster action on climate change. Last November, the United States denied Canadian energy-infrastructure company TransCanada a construction permit for a major pipeline that would have carried oil from the tar sands of Alberta to US refineries.

Misconduct penalty Plant biologist Olivier Voinnet of the Swiss Federal Institute of Technology in Zurich has been stripped of an award and given a three-year ban on receiving funds from the Swiss National Science Foundation. Voinnet made his name studying gene silencing in plants, but charges of image manipulation and other issues have led to a slew of retractions and corrections of his published work (see Naturehttp://doi.org/bb7z; 2015). On 28 January, Europe’s life-sciences organization EMBO told its members that Voinnet had agreed to return the EMBO Gold Medal he won in 2009.

Trachea film A documentary has rekindled controversy surrounding surgeon Paolo Macchiarini, who is famed for performing artificial-trachea transplants. Concerns raised in the documentary, aired last month by SVT, Sweden’s public broadcaster, have prompted the Karolinska Institute in Stockholm, where Macchiarini is a visiting professor, to investigate — five months after it cleared him of separate accusations of scientific misconduct. Footage in the film suggests that one patient who received the risky procedure and later died was in broadly good health before the operation, contradicting the surgeon’s statements that he attempted the surgery only on people facing life-threatening illness. The documentary also illuminated a mismatch between the actual performance of a prosthetic trachea and its description in a paper co-authored by Macchiarini. See go.nature.com/ecqve3 for more. 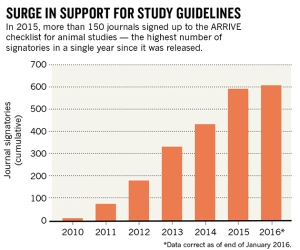 More than 600 journals have signed up to the ARRIVE guidelines, which are designed to improve the reporting of animal experiments. Released in 2010, they list details that should be in such reports, including strains and sexes of animals, calculations and adverse reactions. More journals than ever signed up in 2015, says the UK National Centre for the Replacement, Refinement and Reduction of Animals in Research, which produced the guidelines. Some have questioned whether ARRIVE can be enforced.

5 February
The evolutionary origins of the genus Homo are debated at the Salk institute in La Jolla, California, in a seminar hosted by the Center for Academic Research and Training in Anthropogeny.
go.nature.com/alzjp7