Alzheimer’s drugs Alzheimer’s patients enrolled in clinical trials of two antibody drugs showed minor improvements in their symptoms, two US drug companies reported on 22 July at the Alzheimer’s Association International Conference in Washington DC. Eli Lilly’s drug solanezumab slowed the rate of cognitive decline by 30% over two years. The drugs target amyloid-β protein in the brain, which accumulates in people with Alzheimer’s. A small trial of Biogen’s similar antibody, aducanumab, showed that high doses of the drug, but not moderate doses, removed amyloid and slowed symptoms. Both drugs have entered phase III trials. See page 509 for more.

Nearly Earth 2.0 NASA’s Kepler spacecraft has found an extrasolar planet that is the closest thing yet to a true Earth analogue, the agency announced on 23 July. The planet, named Kepler-452b, orbits a bright star 430 parsecs (1,402 light years) away from Earth, within its star’s habitable zone, where temperatures are right for liquid water to exist on the planet’s surface. Kepler-452b is 60% larger than Earth and may be rocky. If it is, it will be the first terrestrial planet discovered within the habitable zone of a Sun-like star. (Similar planets have been found that orbit stars cooler and dimmer than the Sun.) See page 511 for more. 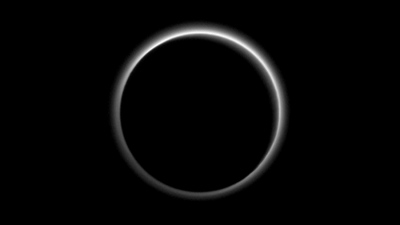 A hazy halo around Pluto The New Horizons spacecraft has discovered hazes in Pluto’s frigid atmosphere, NASA announced on 24 July. Fresh discoveries from the craft’s historic fly-by on 14 July include possibly the first evidence that Pluto’s atmosphere is beginning to freeze and fall as snow on the surface, which is what scientists had expected as its elliptical orbit takes it farther from the Sun. Powerful radio beams sent from Earth to the craft allowed researchers to measure the surprisingly low surface pressure of Pluto’s atmosphere as it bent the radio waves. Other findings include glaciers of nitrogen ice flowing from the Sputnik Planum plains. See go.nature.com/bmmldk for more.

Name that asteroid The Japan Aerospace Exploration Agency (JAXA) has invited the public to suggest names for the asteroid 1999 JU3, which JAXA’s probe Hayabusa-2 will reach in 2018. The spacecraft, which launched in December 2014, will collect samples from the rock and return to Earth in 2020 (see Nature http://doi.org/6dg; 2014). Candidate names will be vetted by a panel of specialists, the asteroid’s discoverers and, ultimately, the International Astronomical Union. The contest, which opened on 22 July, resembles NASA’s call to name features on Pluto; submissions close on 31 August (see go.nature.com/rybeqw).

Outbreak ending The South Korean outbreak of Middle East respiratory syndrome (MERS) is set to be declared as over. Beginning in hospitals in mid-May, the coronavirus outbreak was quickly brought under control, with case numbers peaking on 1 June. In total, 186 people were confirmed as infected, 36 of whom have died. No new cases have occurred since 2 July. On 27 July, the last of 16,693 contacts was released from isolation. The outbreak can officially be declared over when no new cases have been detected for 28 days.

Weapons warning Nearly 2,000 researchers and commentators released an open letter on 28 July calling for the United Nations to ban autonomous weapons. The letter warns that weapons using artificial intelligence (AI) may be only years away, and that their creation could lead to an “AI arms race”. It was released at the International Joint Conference on Artificial Intelligence in Buenos Aires, Argentina, and signatories include more than 1,000 AI researchers, as well as physicist Stephen Hawking and inventor Elon Musk.

Nigeria polio-free On 24 July, Nigeria marked one year since its last case of polio caused by wild virus. The West African nation will be removed from the list of polio-endemic countries once laboratory tests from across the country are complete. Pakistan and Afghanistan are now the only two countries where transmission of polio virus has never been halted. Africa could be certified polio-free as soon as August 2017, three years after the continent’s last case, in Somalia, which was caused by a virus that spread from Nigeria. See go.nature.com/uomxdr for more. 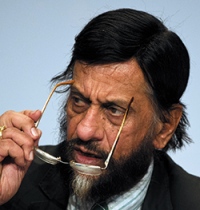 Pachauri out Rajendra Pachauri, the former chairman of the Intergovernmental Panel on Climate Change (IPCC), has been replaced as director-general of The Energy and Resources Institute (TERI) in New Delhi, India. The action by TERI’s governing council, announced on 23 July, comes on the heels of sexual-harassment allegations that cost Pachauri (pictured) his post at the IPCC in February. He will be replaced by Ajay Mathur, an energy official in the Indian government. In a press release, TERI stated that the search for Pachauri’s replacement began in September 2014.

Genome head quits The revered leader of a leading genomics research centre in China has abruptly stepped down. Jun Wang is leaving his post as chief executive of BGI in Shenzhen, the institute announced on 17 July, and will pursue research into artificial intelligence. Wang has worked at BGI since it opened in 1999. He is credited with leading some of its major accomplishments, including being the first to sequence the genome of an Asian person, the giant panda and the human gut microbiota. He also led contributions to the Human Genome Project and the initiative to sequence the rice genome. See go.nature.com/nhdkjs for more.

Pesticide ban lifted A UK government agency has used emergency rules to make controversial neonicotinoid insecticides available to some farmers, despite a European ban imposed on the chemicals in 2013. Neonicotinoids have been linked to declines in bee populations in numerous scientific studies. The UK Department for Environment, Food & Rural Affairs authorized limited emergency use of two pesticides on 22 July after a request by farmers. The National Farmers’ Union says that the pesticides are needed to protect around 300 square kilometres of oilseed rape in England from cabbage stem flea beetles. See go.nature.com/ytp9q6 for more.

Malaria vaccine The world’s first vaccine against malaria can now be used routinely in children — but only in countries where the disease is endemic. On 24 July, the European Medicines Agency in London declared Mosquirix safe for use and moderately effective against the malaria parasite Plasmodium falciparum, in combination with established protective measures such as bed nets. The World Health Organization must now formally agree to recommend its use in children. Mosquirix has been developed by UK-based drug firm GlaxoSmithKline, and is also protective against hepatitis B.

Lifespan lineage A genetic-ancestry company that boasts more than one million paying customers has teamed up with a Google-backed biotechnology firm to uncover lifespan-lengthening DNA. On 21 July, the genealogy firm Ancestry.com in Provo, Utah, announced a partnership between its subsidiary AncestryDNA and Calico, a research and development company in South San Francisco, California. Calico will use anonymized customer-genome data and ancestry records to search for genetic factors that contribute to longevity.

Generic drug deal Jerusalem-based drug company Teva announced on 27 July that it would buy the generics arm of a rival company for around US$40.5 billion. Teva will pay $33.75 billion in cash and hand over roughly $6.75 billion in shares to Allergan, of Dublin, to acquire Allergan Generics. The companies say that they expect the deal to be completed early in 2016.

Hot drugs approved Regulators have approved two members of a hotly pursued class of cholesterol drugs called PCSK9 inhibitors. On 21 July, Biotechnology firm Amgen of Thousand Oaks, California, announced that the European Commission had approved its drug, called evolocumab. Three days later, the US Food and Drug Administration approved Praluent (alirocumab), made by Sanofi US of Bridgewater, New Jersey, and Regeneron of Tarrytown, New York. Both drugs are approved for use in people with familial hypercholesterolaemia, a genetic condition that causes high cholesterol (see Nature 496, 152–155; 2013). 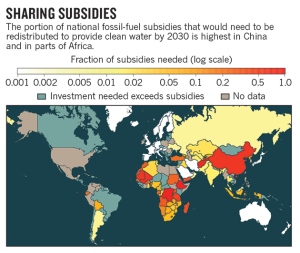 Ending fossil-fuel subsidies, which cost US$550 billion globally in 2011, could free up money to achieve universal access to basic services such as clean water, according to researchers at the Mercator Institute on Global Commons and Climate Change in Berlin (M. Jakob et al. Nature Clim. Change 5, 709–712; 2015). The team says that access to clean water could be achieved for $190 billion, with sanitation and electricity costing $370 billion and $430 billion, respectively.

4–6 August
Planetary scientists gather in Arcadia, California, to argue the case for their favourite Martian landing site. Around 30 candidate locations are in the running to be chosen for NASA’s 2020 Mars rover.
go.nature.com/x4wh7c