Poor policy stances Of more than 200 institutions that have produced public policy statements on animal research, most do not meet the highest standards of openness, according to the group Speaking of Research, which campaigns to improve understanding of animal work. The group analysed policy statements from institutions in Europe, North America and Australia and rated them on the level of detail provided, such as welfare information and images. Only ten institutions got full marks, the group said on 22 February. 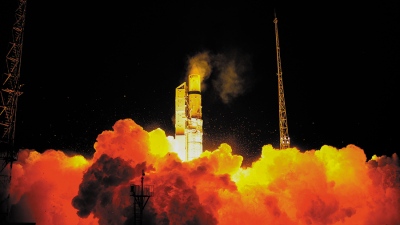 Sentinel-3A launches to monitor Earth The European Space Agency successfully launched the Earth-observing satellite Sentinel-3A on 16 February. The launch, from Plesetsk, Russia, carried a suite of four Earth-observing instruments into orbit as part of Europe’s Copernicus programme. Sentinel-3A is one of two identical satellites, the second of which will launch in 2017. Over the oceans, they will measure sea surface temperatures and sea-ice thickness, and over land they will map how land is used, the extent of vegetation and the height of rivers and lakes. Two other Sentinel satellites launched in 2014 and 2015.

Earthquake action Citing a sharp spike in earthquake activity, a US environmental group has filed a federal lawsuit seeking to curb the injection of wastewater from hydraulic fracturing (fracking) and oil activities in Oklahoma. The California-based Sierra Club, working with law firm Public Justice, filed the lawsuit against 3 energy companies on 16 February, 3 days after a magnitude-5.1 earthquake shook the state. There were 907 earthquakes of magnitude 3 or larger in 2015, compared with 109 in 2013. Scientists have linked the earthquakes to the injection of wastewater, a by-product of fracking.

ExxonMobil anger More than 100 scientists have signed a letter urging the American Geophysical Union (AGU) to reject sponsorship from US oil and gas giant ExxonMobil. Following news reports in late 2015 that indicated that ExxonMobil scientists knew about the threat of global warming decades ago, the letter says that ExxonMobil’s complicity in spreading “climate denial and misinformation” has been well documented. “By allowing Exxon to appropriate AGU’s institutional social license to help legitimize the company’s climate misinformation, AGU is undermining its stated values as well as the work of many of its own members,” the 22 February letter states.

January heats up Last month was the world’s hottest January since records began in 1880, and the ninth month in a row to break a global monthly temperature record, the US National Oceanic and Atmospheric Administration reported on 17 February. The average global temperature was 1.04 °C above the twentieth-century average for January, beating the previous record, from 2007, by 0.16 °C. In the Arctic, which was remarkably warm for the time of year, sea ice was at its lowest January extent since records began in 1979, according to the US National Snow and Ice Data Center.

Stem-cell leader Stem-cell biologist Robert Lanza announced on 22 February that he will be the head of global regenerative medicine for Astellas Pharma, the Tokyo-based firm that acquired Lanza’s company Ocata Therapeutics earlier this month. Lanza is the chief scientific officer for Ocata, based in Marlborough, Massachusetts, which has been a leader in developing stem-cell therapies, despite financial troubles and management changes over the past 15 years (see Nature 481, 130–133; 2012). Ocata is running clinical trials to test stem-cell-derived retinal cells on vision-loss disorders. Lanza says that those trials and other ongoing Ocata research programmes will continue under Astellas.

LIGO-India is go India’s cabinet approved plans to build a gravitational-wave detector on 17 February. The machine, LIGO-India, will be a copy of two LIGO (Laser Interferometer Gravitational-Wave Observatory) machines in the United States, which this month reported the first direct detection of these long-sought ripples in space-time. Having a third machine on the other side of Earth should help physicists to pinpoint the sources of gravitational waves. The site for the 12.6-billion-rupee (US$183-million) project has yet to be selected, but it could be operational by 2023.

Space panorama NASA is officially moving ahead with its next flagship astrophysics observatory, the Wide Field Infrared Survey Telescope (WFIRST), the agency stated on 18 February. Set to launch in the mid-2020s, WFIRST will use a 2.4-metre telescope repurposed from the US National Reconnaissance Office to capture the sky in infrared wavelengths. With its wide-range view, it will be able to measure light from one billion galaxies and illuminate the nature of the dark energy thought to be accelerating the expansion of the Universe. 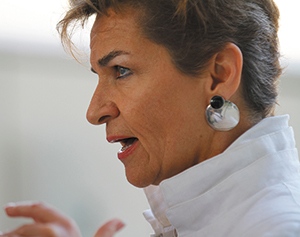 Figueres bows out Christiana Figueres (pictured) will step down in July after her six-year term at the helm of the United Nations Framework Convention on Climate Change comes to an end. The Costa Rican diplomat had a key role in international climate negotiations, which culminated in the landmark emissions-reduction agreement reached at the Paris climate talks in December last year. Figueres’s yet-to-be-named successor will be charged with overseeing the implementation of the agreement, details of which are to be discussed at the UN Conference of the Parties in Morocco in November. See page 382 for more.

New NAS president Geophysicist Marcia McNutt has been elected president of the US National Academy of Sciences (NAS) by its members, the society announced on 16 February. McNutt is currently editor-in-chief of Scienceand its family of journals. She begins her six-year term at the NAS on 1 July, replacing atmospheric scientist Ralph Cicerone, who has served the maximum two terms. McNutt was director of the US Geological Survey from 2009 to 2013.

FDA vote due As Nature went to press, the US Senate was poised to vote on the nominee to head the US Food and Drug Administration (FDA), clinical-trials expert Robert Califf. On 22 February, lawmakers voted to limit debate on Califf’s nomination, setting the stage for a final vote that will determine whether he will become FDA commissioner. President Barack Obama nominated Califf last September, but some lawmakers delayed consideration of the nomination over concerns about the FDA’s recent approval of genetically engineered salmon for use as food and the agency’s handling of an ongoing opioid-approval crisis. See go.nature.com/mfdn9u for more.

Italy research chief Physicist Massimo Inguscio took office on 22 February as president of Italy’s National Research Council (CNR). Inguscio, who comes to the post from the University of Florence, will need to ensure that research in the 103 CNR institutes can stay on track without significant institutional funds — salaries and general expenses absorb most of the CNR’s budget. He will also need to maintain the organization’s commitment to research integrity: the CNR is currently working its way through several cases of potential misconduct in papers co-published by its scientists.

More KI fallout Heads continue to roll in the scandal rocking the Karolinska Institute (KI) in Stockholm: Hans-Gustaf Ljunggren resigned as dean of research on 22 February. He had participated in the decision to clear surgeon Paolo Macchiarini of allegations of misconduct in carrying out experimental transplants of artificial windpipes into patients. Earlier this month, two other KI professors resigned as vice-chancellor of the university and as secretary-general of the Nobel Assembly that chooses the Nobel physiology or medicine prize. The KI and its hospital have opened new investigations into Macchiarini, and Swedish health authorities have referred the matter to the police. 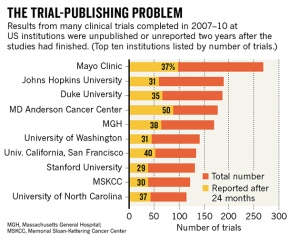 Only 36% of clinical trials completed in 2007–10 at 51 leading US institutions were published or reported on ClinicalTrials.gov within 2 years of the trials finishing, according to an analysis in the BMJ (R. Chen et al. Br. Med J. http://doi.org/bcqf; 2016). The University of Minnesota, which ranked 15th in terms of number of trials, was most prompt at reporting results, with 55% of trials reported within two years. See go.nature.com/9cwl9a for more.

25–26 February
Potential marine World Heritage sites in the Arctic will be discussed at UNESCO headquarters in Paris.
go.nature.com/crvleg

29 Feb–2 March
NASA invites the astrophysics community to Pasadena, California, to discuss the science that can be done with the Wide Field Infrared Survey Telescope, which will study the nature of dark energy and search for exoplanets.
go.nature.com/chvjtq