Boost for AI South Korea announced on 17 March that it would invest 1 trillion won (US$863 million) in artificial-intelligence (AI) research over 5 years. The announcement came two days after Google DeepMind’s Go program AlphaGo beat grandmaster Lee Sedol 4–1 in an exhibition match, a feat that prompted a spate of newspaper headlines concerned that South Korea was falling behind in a crucial growth industry. It is not immediately clear whether the cash represents new funding or is money that had been previously allocated to AI efforts. The investment includes a high-profile, public–private research centre near Seoul. See go.nature.com/h3erre for more. 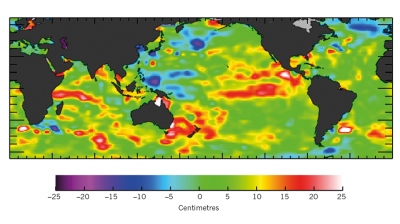 Satellite tracks sea-surface levels Jason-3, a joint US–European satellite mission to monitor sea-level rise, has produced its first complete global map of sea-surface height anomalies. The image, released on 16 March, draws on ten days of data collected by the probe after it reached its intended orbit following its 17 January launch. NASA and its European partners — the French space agency CNES and the meteorological agency EUMETSAT — plan a three-year mission for Jason-3. The data that the probe collects could help to improve weather and climate forecasts globally.

Particle promise Hints of a mysterious particle at the Large Hadron Collider (LHC) near Geneva, Switzerland, just got a little stronger. In December, physicists announced that they had seen an excess of pairs of γ-ray photons — possibly a sign of a particle not predicted by the standard model of physics. The data came from ATLAS and CMS, the two largest detectors at the LHC. A fresh analysis reported on 17 March at a conference in La Thuile, Italy, slightly increases the statistical significance of the signal seen by the CMS experiment. See go.nature.com/pbxwl2 for more.

Virus control Mosquitoes carrying a gene that kills their offspring should be released in small pilot studies during the current Zika outbreak, the World Health Organization (WHO) Vector Control Advisory Group said on 18 March. The group also endorsed field tests of mosquitoes carrying bacteria that reduce the insects’ ability to transmit Zika, dengue and other viruses. Studies show that these interventions can reduce populations of Aedes aegypti mosquitoes, but they have not established whether such interventions can minimize disease burden in humans — a crucial gap that pilot studies could fill, the group said.

Offshore plans The US Department of the Interior announced on 15 March that it will not pursue offshore oil and gas development along the US Atlantic coast. The decision, released as part of the offshore-leasing programme for 2017–22, reverses an earlier proposal to sell leases along the central and southern Atlantic coast, from Virginia to Georgia. The proposed plan would move forward with leasing in the Gulf of Mexico and off the Alaskan coast.

Ebola flare-up ends Sierra Leone is clear from Ebola after a recent flare-up, the World Health Organization (WHO) announced on 17 March. The date marked 42 days since the last person confirmed to have Ebola virus disease in Sierra Leone tested negative for a second time. The WHO classes this window — twice the incubation period of the virus — as the time needed to declare an outbreak over. On the same day, the WHO confirmed two new cases of Ebola in a rural village in Guinea, which had been declared free of Ebola in December.

Coral concerns Faced with ongoing damage to its corals, the Great Barrier Reef Marine Park Authority raised its response status to level three — the highest possible, meaning ‘severe regional bleaching’ — on 20 March. The decision was made despite heavy rains, which have lowered the high water temperatures that have been killing corals along parts of Australia’s northeast coast. According to the authority, divers have found up to 50% coral mortality near the tip of Cape York, but most surveyed sections of the park are in a better state. This regional damage is part of a global coral-bleaching event linked to warmer-than-average waters (see Nature http://doi.org/bdmn; 2015). 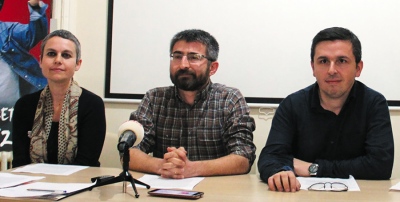 Turkey arrests Three Turkish academics in Istanbul were taken in for questioning on 14 March and have now been formally arrested and held without bail. They are under suspicion of ‘making terrorist propaganda’, after signing a petition in January calling for an end to violence between government forces and Kurdish separatists in Turkey’s southeast. Those held (pictured, from left) are psychologist Esra Mungan from Boğaziçi University, political scientist Muzaffer Kaya from Nişantaşı University and mathematician Kıvanç Ersoy from Mimar Sinan University. Four days earlier, the three had held a press conference affirming their commitment to the ‘academics for peace’ petition. See go.nature.com/m7uacx for more.

Cancer moonshot Cancer survivor Gregory Simon was named executive director of the US Cancer Moonshot Task Force on 18 March. Simon was founding president of FasterCures, a non-profit organization in Washington DC dedicated to speeding the development of new medicines, and has worked in government and the pharmaceutical industry. He most recently helmed a health-care investment company. The moonshot project, driven by US vice-president Joe Biden, aims to double the pace of cancer research. President Barack Obama has asked Congress for US$755 million to fund the endeavour in 2017.

China hunts waves China’s plans to detect gravitational waves took a step forward on 20 March, as construction began on the TianQin project at Sun Yat-sen University in Zhuhai. A research building, observation station and ultra-quiet cave laboratory will be built ahead of the launch of three Earth-orbiting satellites. Gravitational waves should be revealed as disturbances in laser beams bounced between the spacecraft. China also has another space-based gravitational-wave detector in the works: the Taiji project from the Chinese Academy of Sciences will involve a trio of Sun-orbiting satellites. See go.nature.com/rral31 for more on China’s plans.

Nobel Prize home A Nobel Center will be built on the Blasieholmen peninsula in Stockholm’s central waterfront by 2019. The City Planning Committee approved detailed plans for the site on 16 March. At a cost of 1.2 billion Swedish kronor (US$146 million), the building will house the Nobel Museum and future prize ceremonies. The centre will be open to visitors and scientists, incorporating research projects, educational efforts, conferences and a library. But its large size and location has attracted criticism, drawing concerns that it will ruin Stockholm’s skyline.

Boaty McBoatface The British public has flocked to a competition to name a new UK polar research vessel, which is under development and set to be finished in 2019. The Natural Environment Research Council (NERC) allowed people to submit and vote on names for the £200-million (US$289-million) ship, but its website crashed repeatedly after the poll was launched on 17 March. As Nature went to press, the proposed name RRS (Royal Research Ship) Boaty McBoatface was the most popular suggestion, with thousands of votes more than the second choice, RRS Henry Worsley. The final name will be chosen by NERC. 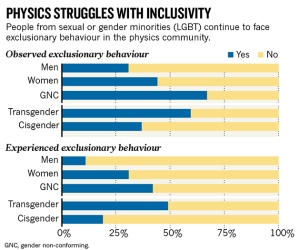 Around one-fifth of physicists from sexual and genderminorities (LGBT) surveyed by the American Physical Society (APS) said that they had been ignored, intimidated or harassed at work (see go.nature.com/4zobly). Transgender respondents were the most affected: almost half had experienced exclusionary or harassing treatment in the previous year. And more than three times as many women as men had experienced such behaviour. See go.nature.com/hitnez for more.

28–29 March
The US National Institutes of Health holds a special meeting to discuss the spread of Zika virus in the Americas, and ways to contain it.
go.nature.com/vov9qk

29–31 March
The University of Central Lancashire in Preston, UK, hosts a meeting of academics and industrialists to discuss applications of nanotechnology.
go.nature.com/ipysuj

30 March–22 April
NORDITA, the Nordic Institute for Theoretical Physics, hosts a meeting in Stockholm on advances in string theory and gauge theory.
go.nature.com/9omyzv

The item ‘Boaty McBoatface’ wrongly described the NERC as the ‘National’ instead of the Natural Environment Research Council. This has now been fixed.