Comet probe wakes Philae, the space probe that landed on a comet in November 2014, is awake. The European Space Agency (ESA) announced that it had received signals from the lander on 13 June. Philae’s battery ran out just three days after it landed on 67P/Churyumov–Gerasimenko. Stuck in the shade, it was unable to charge its solar-powered battery and entered hibernation. Scientists had hoped that Philae would regain power as the comet neared the Sun. See page 263 for more.

Oil-sands petition A group of more than 100 North American scientists released a petition calling for a moratorium on the development of Canadian oil sands. Issued on 10 June, the statement claims that crude oil from oil sands is responsible for more carbon emissions than are other transport fuels. Its use also pollutes the air and water. Continued development of the oil sands in Alberta is therefore inconsistent with efforts to reduce greenhouse-gas emissions unless it is coupled with a larger plan to address global warming, the petitioners say. 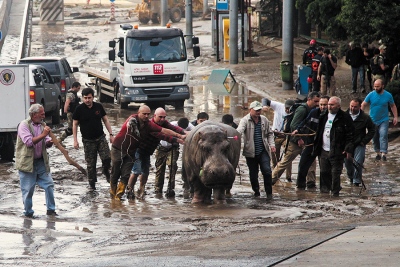 Zoo escape adds to Georgia’s flood woes Georgia declared 15 June a national day of mourning after severe flooding killed at least 12 people and led to the escape of zoo animals in Tbilisi. A further 24 people are missing after heavy rains. People in Tbilisi were warned to stay in their homes after various animals — including a bear and hippopotamus — escaped from the zoo after floods destroyed enclosures.

Curve honoured The iconic ‘Keeling curve’, a 57-year global record of carbon dioxide in the atmosphere, was made a US National Historic Chemical Landmark on 12 June. The late Charles David Keeling, a geochemist at the Scripps Institution of Oceanography in La Jolla, California, began the CO2 measurements in 1958 at Mauna Loa in Hawaii, and the curve has become a record of human effects on the atmosphere. The designation is from the American Chemical Society, which has held commemoration events at the Scripps campus and the Mauna Loa site.

Array amplification The Telescope Array, a Japan-led cosmic-ray observatory in Utah, will nearly quadruple in size to about 2,500 square kilometres, the University of Utah in Salt Lake City announced on 15 June. Japan pledged ¥568 million (US$4.6 million) to add scintillation detectors, and US collaborators will seek $1.8 million to build extra fluorescence detectors. The upgrade could take three years to complete. Researchers hope that the expansion will help them to determine the nature of an apparent ‘hotspot’ of ultra-high-energy cosmic rays coming from the part of the sky near Ursa Major.

Neutrino switch Neutrinos — subatomic particles that come in three ‘flavours’ —have been confirmed to switch spontaneously from muon to tau flavour. Physicists in the OPERA experiment detected five tau neutrinos in a muon neutrino beam that travelled 730 kilometres from Switzerland to the Gran Sasso underground laboratories in Italy. OPERA spokesperson Giovanni De Lellis announced on 16 June that the phenomenon has been achieved with the necessary statistical precision for it to be considered a discovery.

Aviation emissions The US Environmental Protection Agency issued a draft ruling on 10 June that greenhouse-gas emissions from aviation endanger human welfare. A formal finding of ‘endangerment’ would enable the agency to set climate regulations for aircraft under the Clean Air Act, building on similar regulations that have already been established for cars. The EPA said that it is participating in an international effort to develop carbon dioxide standards led by the International Civil Aviation Organization, which is expected to produce a set of standards in early 2016.

Emissions peak Global energy-related emissions could peak as early as 2020, according to a report published by the International Energy Agency on 15 June. Achieving the goal would require countries to increase energy efficiency and use of renewable energies, reduce reliance on coal, phase out fossil-fuel subsidies and reduce methane emissions from oil and gas production. The report also laid out steps to achieve a successful international climate agreement in Paris this December: negotiators must focus on an early peak in energy emissions, set up a five-year review of national targets, establish a long-term emissions goal and create a process to track progress. 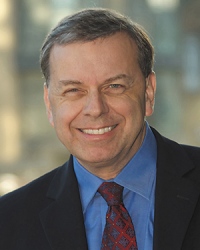 Nature knighthood The editor-in-chief of Nature, Philip Campbell, was among those recognized for contributions to science in the United Kingdom’s 2015 Queen’s birthday honours. Campbell (pictured) received a knighthood, one of the highest distinctions in UK honours system, alongside metallurgist Harshad Bhadeshia of the University of Cambridge, UK, Peter Downes, vice-chancellor of the University of Dundee, UK, and other researchers. Among those made dames were Frances Ashcroft, a diabetes researcher at the University of Oxford, UK, and Anne Glover, the former chief scientific adviser to the European Commission. See go.nature.com/gvzy22 for more.

NIH role changes Sally Rockey, long-time head of the extramural research programme at the US National Institutes of Health (NIH), will leave the agency in September, she announced on 11 June. Rockey, well known for her Rock Talk blog about NIH grants, will now head a non-profit corporation called the Foundation for Food and Agriculture Research, which seeks private donations for research (see Nature http://doi.org/5dm; 2015). On the same day, the NIH named neurologist Walter Koroshetz as director of the US National Institute of Neurological Disorders and Stroke. Koroshetz has served as the institute’s interim director since October 2014.

Frozen-ovary first A healthy baby boy has been born to a woman transplanted with her own preserved ovarian tissue, removed in childhood, researchers said on 9 June. The woman had had her right ovary removed as a consequence of treatment for sickle-cell anaemia. Tissues from it were frozen, and were transplanted back a decade later. Two years after that, the woman conceived naturally, giving birth in November 2014 (I. Demeestere et al. Hum. Reprod. http://doi.org/5dj; 2015). Babies have been born from frozen ovarian tissue before — but previous cases have always involved tissue taken from adults.

US chimp ruling Biomedical research using chimpanzees in the United States may become nearly impossible, following a 12 June ruling from the US Fish and Wildlife Service (FWS) that designated the animals an endangered species. Wild chimpanzees have been on the endangered list since 1990, but until now their captive counterparts have been exempted. The FWS rule makes it illegal to harass or harm captive chimpanzees unless the research also benefits the animals in the wild. US chimpanzee research was sharply curtailed in 2013, when the US National Institutes of Health retired most of its chimps. See go.nature.com/fvkouw for more.

Cholesterol drugs An emerging class of cholesterol drug has won overwhelming support from advisers to the US Food and Drug Administration (FDA). On 9 and 10 June, advisers voted in favour of recommending FDA approval for two drugs that target a protein called PCSK9, which is involved in cholesterol processing by the liver. Drugs that inhibit PCSK9 boost cholesterol uptake (see Nature 496, 152–155; 2013). The two drugs — alirocumab (Praluent) from Paris-based Sanofi and evolocumab (Repatha) from Amgen of Thousand Oaks, California — are under consideration for treating a genetic condition that causes high cholesterol. 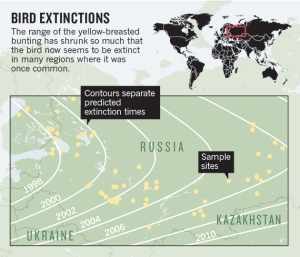 The population of what was once one of Eurasia’s most abundant songbirds has crashed. Numbers of the yellow-breasted bunting (Emberiza aureola) fell by 84–95% between 1980 and 2013 and its range has shrunk by 5,000 kilometres (J. Kamp et al. Conserv. Biol. http://doi.org/5dh; 2015). The bird is now thought to be extinct in the northwestern parts of its habitat. The authors of the study say that widespread trapping of the birds in China may be partly to blame, but that other drivers cannot be ruled out.

22–26 June
Some 600 astrophysicists gather in Tenerife, Spain, for the annual meeting of the European Astronomical Society.
go.nature.com/cnkj7g

22–26 June
Pathogen detection, biosurveillance and point-of-care technologies will be discussed by leaders from government, academia and industry at the Biodefense World Summit in Bethesda, Maryland.
go.nature.com/ymuyui

24–27 June
The International Society for Stem Cell Research holds its annual meeting in Stockholm. More than 4,000 experts from 50 countries are expected to attend.
go.nature.com/acbzu3