Clone-products ban The European Parliament has voted in favour of a sweeping ban in the European Union on the use of food and feed products — domestic or imported — from cloned animals and their descendants. The rules tighten a draft law proposed in 2013 by the European Commission to prohibit the sale of food products derived from cloned animals. Parliamentarians said that the proposed amendments, voted in on 8 September, reflect widespread consumer concerns over animal welfare and food safety. But Vytenis Andriukaitis, the European commissioner for health and food safety, called the amendments “disproportionate” and warned that they might prove “legally impossible”.

Energy review The US Department of Energy released its second Quadrennial Technology Review on 10 September, which looks at current energy technologies and identifies opportunities for research and development. The report suggests that the US energy system is becoming increasingly diverse with the rise of renewable power, as well as being more interconnected through Internet and communications technologies; both trends open the door to cleaner energy and fewer emissions. Although the United States has made progress on energy efficiency, the report notes that substantial opportunities remain for reducing energy consumption and costs.

Sonar muffled The US Navy has agreed to limit its sonar and explosives activities in areas that might harm dolphins, whales and other marine mammals. The agreement between the navy and environmental groups, including Earthjustice and the Natural Resources Defense Council, was ordered by a federal judge on 14 September. The navy will not be able to use sonar, which can disrupt communication between marine mammals, in areas off the Southern California coast. Areas around Hawaii’s islands are protected from sonar and explosives training operations.

Energy ambitions The California legislative assembly passed laws on 11 September that will increase requirements for renewable-energy production in the state. The bill, sought by Governor Jerry Brown, raises the current renewable-energy quota of 33% by 2020 to a more-rigorous 50% by 2030. It also sets a goal of doubling energy efficiency in the electricity and natural-gas sectors by 2030. An earlier draft of the bill would have required the state to halve its oil use over the same period, but the provision was dropped because of feasibility and cost concerns. 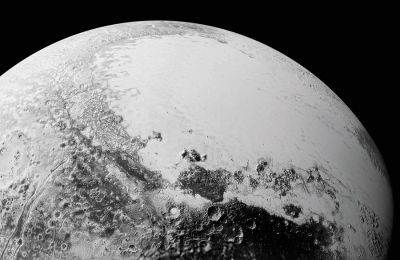 Pluto’s ‘heart’ snapped in high resolution The left lobe of Pluto’s bright heart-shaped feature, Tombaugh Regio, is clearly seen in the upper right of this image released on 10 September. The view spans 1,800 kilometres and is generated from high-resolution images gathered during the 14 July fly-by of Pluto by NASA’s New Horizons spacecraft. The boundary between the bright, icy plains (called Sputnik Planum) and dark, cratered terrains (called Cthulhu Regio) is particularly striking.

Land undervalued Global land degradation costs between US$6.3 trillion and $10.6 trillion per year, according to the Economics of Land Degradation (ELD) Initiative in Bonn, Germany. In a report published on 15 September, the ELD said that unsustainable land management ruins productivity and removes ecosystem services that have no market value, including nutrient recycling and disease regulation. The loss figure includes the costs of replacing these services, for example by buying fertilizers or vaccines. People without funds to replace services such as clean water are particularly vulnerable to land degradation.

Permafrost tracked The first international database of standardized permafrost data was launched this week by the Global Terrestrial Network for Permafrost (GTN-P), an international consortium that aims to establish an early-warning system for permafrost thawing, for use by scientists and policymakers. The European Union-funded database gathers frozen-soil temperatures and annual thaw depths. Permafrost has a key role in climate-change modelling, because when it thaws it can release the greenhouse gases carbon dioxide and methane.

Boost for Africa Researchers in African nations will share more than £46 million (US$70 million) in a programme to build science capacity. The first seven ‘Developing Excellence in Leadership, Training and Science’ (DELTA) awards were announced on 10 September. They range from mental-health research in Zimbabwe to science-leadership training in Kenya. Funded by the London-based biomedical charity the Wellcome Trust, together with the UK Department for International Development and the Bill & Melinda Gates Foundation, the DELTAs programme will from 2016 be managed by the newly formed Alliance for Accelerating Excellence in Science in Africa (see Nature 520, 142–143; 2015).

New sponsor sought Intel will drop its support for the oldest and most prestigious science contest for US high-school students, Science Talent Search, after the 2017 event. Eight Nobel prizewinners, five winners of the National Medal of Science and many other scientists are alumni of the 73-year-old programme, in which students are judged on original research. The Society for Science & the Public in Washington DC, which runs the competition, announced on 9 September that it was looking for a new sponsor after Intel pulled its US$1.6-million annual backing, begun in 1998. 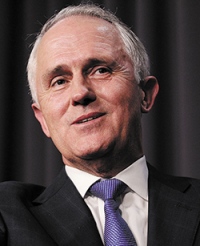 Turnbull coup Malcolm Turnbull has ousted his fellow Liberal party member Tony Abbott as Australian prime minister, after forcing a party ballot on 14 September. Turnbull (pictured) won the leadership vote by 54 votes to 44. On his first day, Turnbull said that he would keep current climate-change policies for now. In 2014, Abbott repealed Australia’s carbon tax and scrapped an emissions-trading scheme, disappointing Australian climate scientists. In 2009, Turnbull was overthrown as party leader by Abbott, in part because of Turnbull’s support for an emissions-trading scheme.

Pesticide repealed A US appeals court has rescinded the approval by the Environmental Protection Agency (EPA) of an insecticide named sulfoxaflor. The approval was challenged by a group of bee-keeping organizations, which cited evidence that sulfoxaflor — a neonicotinoid compound with an unusual mechanism — is highly toxic to bees. The court ruled on 10 September that the EPA’s decision was based on ‘flawed and limited data’. Dow AgroSciences, which won approval for sulfoxaflor in 2013, is considering challenging the ruling.

Phage trial starts A European company has started the first randomized clinical trial using bacterium-killing viruses called phages. On 9 September, Pherecydes Pharma, based in Romainville, France, announced that it had begun enrolling people with burns who are susceptible to infection by the bacteria Escherichia coli and Pseudomonas aeruginosa. The company will test two cocktails of phages that attack these species in trials involving 220 people in Switzerland, France and Belgium. Phage therapy has been used for decades in Eastern Europe, but has not yet been tested in a large, controlled trial. 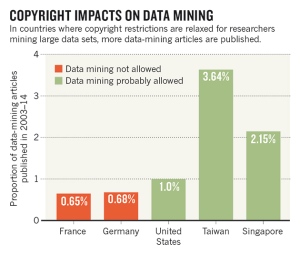 Researchers in countries that often give academic exemptions from copyright laws, such as the United States, publish more data-mining studies than in places such as Germany and France, where academics must first gain consent. The work, presented at the 2 September European Policy for Intellectual Property meeting in Glasgow, UK, analysed 18,441 articles on data mining, a method that allows investigators to trawl large data sets for discoveries (C. Handkey et al. Soc. Sci. Res. Netw. http://doi.org/7px; 2015).

879
Total number of days Russian cosmonaut Gennady Padalka has spent in space, the most by any individual. Padalka returned from his latest stay on the International Space Station on 11 September.

17–18 September
Scientists from across academia and industry gather in Nairobi to discuss biotechnology and biomedical science in Africa.
aibbc.org