Scottish adviser Sheila Rowan became chief scientific adviser to the Scottish government on 13 June. The University of Glasgow physicist is part of the US-based Advanced Laser Interferometer Gravitational-Wave Observatory (LIGO) collaboration, which in 2015 made the first direct observation of gravitational waves. In an appointment lasting three years, Rowan is tasked with providing the Scottish government with expert advice on science-related issues, and with championing the use of science in policy development.

Jerome Bruner dies Psychologist Jerome Seymour Bruner died at the age of 100 on 5 June. Working at Harvard University in Cambridge, Massachusetts, then at the University of Oxford, UK, and New York University, Bruner was a pioneer of cognitive psychology before turning his attention to developmental and educational psychology. He coined the term ‘scaffolding’ to describe how children build on the knowledge they have, and proposed a teaching approach based on it. He was on the science advisory committees during the presidencies of John F. Kennedy and Lyndon B. Johnson.

Brighter nights for Earth The glow of artificial light denies one-third of humanity the sight of the Milky Way. The ‘new world atlas of artificial night sky brightness’, produced with recently available imaging data from NASA’s high-resolution Suomi National Polar-orbiting Partnership satellite, maps global night pollution in improved detail. Released on 10 June, it shows that nocturnal light pollution is worst in Italy and South Korea, with Canada and Australia the least affected of industrialized countries (F. Falchi et al. Sci. Adv. 2, e1600377; 2016). The authors calculate that the ongoing conversion from high-pressure sodium lamps to white LED lighting could lead to a doubling of the undesired brightness of the night sky.

LIGO strikes again Nine months after the first discovery of gravitational waves made science history, news broke on 14 June that a similar event has been observed. On 26 December, the twin detectors of the Advanced Laser Interferometer Gravitational-Wave Observatory (LIGO) in Louisiana and Washington state detected the tell-tale sign of two black holes spiralling into each other and merging about 429 million parsecs away. Researchers reported the finding this week, at a meeting of the American Astronomical Society in San Diego, California.

Nobel support As the British people prepare for a 23 June vote on whether to leave or remain in the European Union, 13 Nobel laureates have lent their support to staying in. In a letter published on 10 June in the newspaper The Daily Telegraph, the laureates, including physicist Peter Higgs and geneticist Paul Nurse, warned that UK science would suffer in the event of a ‘Brexit’. “Science thrives on permeability of ideas and people, and flourishes in environments that pool intelligence, minimise barriers, and are open to free exchange and collaboration,” they argue, stressing that the EU provides just that environment. See page 307 for more.

Cyberattack The University of Calgary in Canada said on 7 June that it had paid a ransom worth Can$20,000 (US$15,600) in untraceable Bitcoins to hackers who had encrypted much of the university’s past 50 years of research data. A spokeswoman for the university said that no personal or university data had been released to the public. Most of the researchers affected regained access to their data within three days, she said. The university was confident that it could restore most missing data from back-ups, and that it had purchased the decryption keys from the hackers only as a last resort.

Elemental choice Three newcomers to the periodic table are to be called nihonium, moscovium and tennessine in reference to Japan, Moscow and Tennessee, where scientists first created them. A fourth entry, oganesson, is to be named in honour of 83-year-old Russian scientist Yuri Oganessian, who helped to discover it — only the second time that a chemical element has been named after a living scientist. The International Union of Pure and Applied Chemistry proposed the names and symbols of the four elements with atomic numbers 113, 115, 117 and 118 — short-lived artificial elements that do not occur in nature — on 8 June. See go.nature.com/1vowh1u for more.

NIH windfall The US National Institutes of Health (NIH) is poised to receive its second major budget increase in two years. On 7 June, the US Senate voted to add US$2 billion to the agency’s annual budget, bringing it to $34 billion. The boost will have to be reconciled with the US House of Representatives’ spending bill, which has yet to be released. The windfall is to be focused on specific programmes, including a precision-medicine initiative and research on Alzheimer’s disease, but does not include any money for the Cancer Moonshot initiative promoted by US vice-president Joe Biden.

Deer prion in moose The discovery in Norway of two moose infected with chronic wasting disease suggests that the neurodegenerative disorder might be gaining traction in Europe. The fatal, infectious prion disease is related to bovine spongiform encephalopathy (‘mad cow disease’), and was thought to be limited to deer, elk and moose in North America and South Korea. In April, researchers at the Norwegian Veterinary Institute in Oslo detected it for the first time in Europe in a wild reindeer (Rangifer tarandus tarandus; see Nature http://doi.org/bjz5; 2016). Since May, at least three Norwegian moose (Alces alces, pictured) have tested positive for the disease, which is caused by abnormal proteins. Researchers don’t yet know how the disease spread to Europe, or in which species it originated in Norway.

Chemical bill The US Senate on 7 June approved a bill to overhaul and strengthen the 1976 Toxic Substances Control Act, which has been widely criticized as ineffective. Companies have registered some 85,000 chemicals with little or no safety review by government regulators. Roughly 700 new chemicals enter the marketplace each year. The updated legislation would grant the US Environmental Protection Agency authority to investigate hazardous chemicals, both new and old, that are used in consumer products or commercial and industrial processes. US President Barack Obama, who strongly supports the reform, is expected to sign the legislation into law.

Climate pledges US President Barack Obama and Indian Prime Minister Narendra Modi agreed to a suite of climate goals during a meeting at the White House on 7 June. The two leaders pledged to push for a 2016 amendment to the Montreal Protocol on Substances that Deplete the Ozone Layer to reduce the use of heat-trapping hydrofluorocarbons, which are commonly used in air-conditioning units. They also announced a string of clean-energy partnerships, and Obama promised to ratify the 2015 Paris climate agreement as early as this year.

Visa overhaul The European Commission has proposed changes to the visa scheme for highly educated prospective migrants, to facilitate the legal immigration of skilled workers. The existing Blue Card system, adopted in 2009, has failed to attract much foreign talent to the European Union because of restrictive admission conditions and conflicting national visa rules, EU migration commissioner Dimitris Avramopoulos said on 7 June. A relaxed EU-wide scheme would enable immediate work permits and quicker access to long-term residence. The United Kingdom, Ireland and Denmark are exempted from the proposed visa scheme.

Standing up for science Nominations are invited for the John Maddox Prize, which rewards an individual in any country who has promoted sound science and evidence on a matter of public interest. The £2,000 (US$3,000) prize puts emphasis on those who have faced difficulty or hostility for their efforts. The prize is awarded by Nature and the London-based Sense About Science, and is supported by the Kohn Foundation. The deadline for nominations is 1 August 2016. See go.nature.com/9rvd1t.

Scientists spend an average of 8.4 hours per article reviewing papers submitted for publication. But reviewing times differ with subject area and reviewer age, according to a survey of opinions and attitudes towards peer review by the London-based Publishing Research Consortium. On average, reviewers spend twice as long on papers in mathematics and computer sciences as on papers in clinical and social sciences. Academics who are older than 65 take half the time of those under 36. 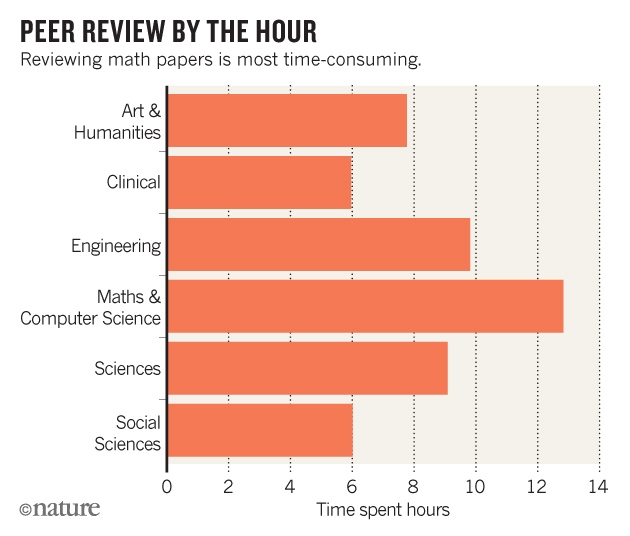